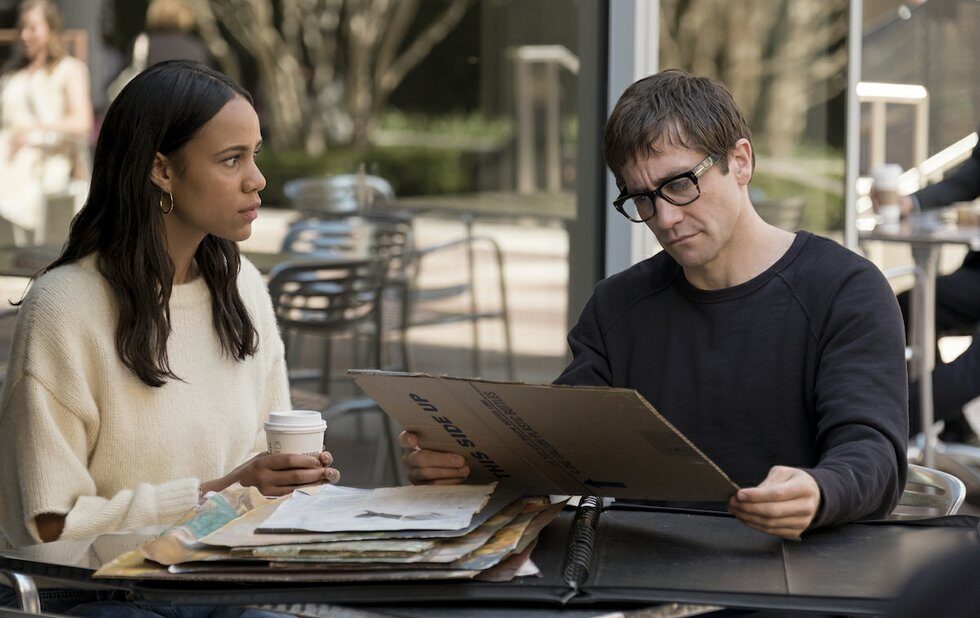 Dan Gilroy and Jake Gyllenhaal, the writer/director and star of Nightcrawler, 2014’s vicious drama about a freelance crime-scene videographer operating in the if-it-bleeds-it-leads local news media, have reunited for this less successful attempt at a horror tale set in the equally predatory Los Angeles art world.

The filmmakers are trying to replicate what Jordan Peele pulled off in Get Out: crafting fun, scary genre entertainment with a serious message. Unfortunately, their exposé into art-world posturing fails to resonate as deeply as Peele’s exploration of the racism that lies behind white liberalism. Also, Get Out has lot more going for it plot-wise: protagonists to root for, characters who morph from slightly off to over-the-top villains, genuine scares. Velvet Buzzsaw comes up short on all counts.

The story follows a bunch of art insiders from Art Basel’s Miami Beach fair to L.A.: smug, bisexual critic Morf (Gyllenhaal), cut-throat gallery owner and former punk musician Rhodora (Rene Russo), her put-upon underling Josephina (Zawe Ashton) and other assorted dealers, curators and artists. When a man named Virtil Dease dies in Josephina’s building, she steals his paintings of violent, traumatic events, which the unknown artist had wanted destroyed. She uses them as a bargaining chip with Rhodora, and soon the outsider artworks become a sensation – with mega-prices attached. But it turns out Dease’s art is imbued with some devilish power that can infect other artworks.

To anyone familiar with the art world, some of the satire is dead-on: the money-grubbing cloaked in high-mindedness, the dishonest business practices, the pretentious language, the backstabbing, the all-black outfits and fancy eyeglasses, the boring abstract paintings and the incomprehensible video installations.

The actors do their best with the stereotyped characters, but no real development happens. Gilroy must have felt that keeping them one-note would make it more satisfying to ultimately see them gruesomely picked off, but a touch more ambiguity might have made the proceedings less rote.

Velvet Buzzsaw also gets some things about the art world wrong: cultural critics don’t really have the kind of king-making power Gilroy assigns to Morf. In another time, maybe a restaurant or movie critic could make or break a business or film, but an art writer is unlikely to cause an artist’s suicide attempt with a bad review, as Morf does. In fact, critical pans of art shows are unusual – at least in Canada, where everyone wants to be nice. Unlike writers on film and other mass media, who try to cover everything, art critics simply ignore what they don’t like.

Another problem in Velvet Buzzsaw (and with fiction films about art in general) is the art we see on screen. Productions can’t afford real artwork and must commission knock-offs to stand in. Outsider art should serve as a compelling alternative to the dull stuff we see here: the flat abstract paintings by a veteran artist (played by John Malkovich), an Anish Kapooresque shiny sculpture and an installation replicating a middle-American living room.

Dease is obviously based on Henry Darger, a Chicago outsider whose work was discovered by neighbours after his death in the 1970s. Darger transmuted childhood trauma into strange and disturbing depictions of an imaginary and sadistic war between children of ambiguous gender and male adults. Here, though, the filmmakers have evidently hired an illustrator to paint fairly literal representations of Dease’s past and future mayhem that completely lack the power everyone in the film attributes to them – much less the obsessive charge generally associated with outsider art.

Absent from the film are the real lords of the art world: the collectors, the one-percenters and oligarchs who hoard art and fund museums as a sophisticated, largely unregulated money game, and to whom real-world dealers, curators, art advisers and artists must all toady. Wouldn’t it be more interesting to locate the evil within the real power players rather than with some poor vengeful janitor?

This film could have had a real kick if it drew on the real art world horror stories unfolding today: how the Sackler family, funders of multiple international art institutions, precipitated the opioid epidemic through their family-owned company Purdue Pharmaceuticals, makers of OxyContin or how U.S. law enforcement fires tear gas canisters made by Whitney Museum board member Warren Kanders’s company Safariland at migrants at the Mexican border.

Velvet Buzzsaw would capture more genuine horror if it had just followed the money.