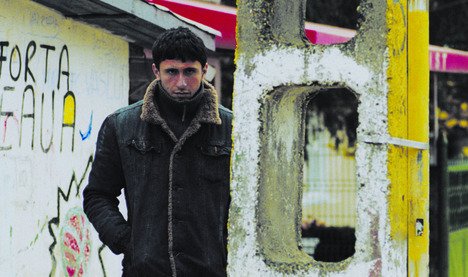 Police, Adjective opens in a Bucharest suburb, where a narcotics detective named Cristi (Dragos Bucur) is doggedly conducting surveillance. He follows a teenager around town, noting his routine and his acquaintances. It’s monotonous work, and for a while director Corneliu Porumboiu lets it play out in rhythms approximating real time.[rssbreak]

Eventually, we come to understand that Cristi has been charged with building a trafficking case against the kid. But it’s shaky the kid smokes a little hash with a couple of friends in the schoolyard but doesn’t look like a dealer. And the informant who delivered the kid might have designs on the kid’s girl, making his motivations questionable. And if the kid’s not a dealer, a trafficking charge won’t be a minor inconvenience. It’ll destroy any chance he has of a decent life.

Cristi is trying his best to enforce the law in a conscientious manner – double- and triple-checking his sources, carefully composing his reports to avoid directly incriminating his subject and being as thorough as possible in his investigation – the better to drag it out until he figures out how to get the kid off the hook.

You may have guessed that Police, Adjective is not big on car chases and gunplay. Its biggest dramas play out inside Cristi’s head – until, in a riveting sequence, our hero is called into his superior’s office for a semantics lesson. There, he (and the viewer) is forced to confront both the limits of his authority and the sorry, overly bureaucratic legacy of a society recovering from dictatorship.

Trust me. It may seem like pointless moral haggling, but Porumboiu has constructed a thrilling exploration of the intersection between social dynamics and personal morality – and the way a nation can shift from cruel dictatorship to indifferent bureaucracy.

You’ll be on the edge of your seat.