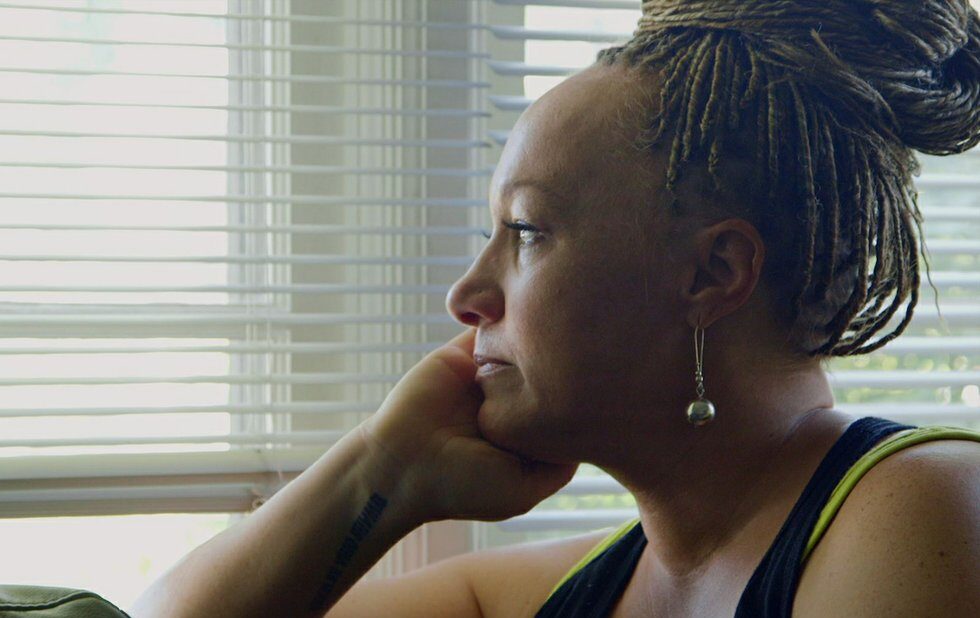 Watching The Rachel Divide is a tedious experience. Running just short of two hours, the doc fancies itself to be some complex, psychological examination of Rachel Dolezal’s performance as a Black woman. But it’s not.

Rather, it rehashes the discourse that’s surrounded Dolezal from the beginning: “Why would a white woman, a beneficiary of racial privilege, want to pass herself off as Black and face racism and systemic oppression?” The question fuelled the media circus surrounding Dolezal. But the inquiry itself is racist, calling into question the value of Blackness.

Nevertheless, director Laura Brownson spends a lot of time searching for the answer. She unpacks Dolezal’s “transracial” transformation with empathy and a sappy soundtrack to boot. But Dolezal isn’t the puzzle the film imagines her to be.

Brownson finds her smoking gun in Dolezal’s psychologically abusive upbringing by fundamentalist parents, who adopted four Black children only to subject them to cultural isolation and physical abuse bordering on torture. Dolezal remarks that she had to be “the bridge” to her sibling’s sense of self, a delusional way of saying “their white saviour.”

Brownson follows this thread to a seemingly weighty revelation where Dolezal admits she can’t go back to “that particular mode again” – aka being white – because “I’m not going to subject myself to my parent’s punishment all over again.”

Now, I didn’t just give away some major spoiler. As a Black woman, it was apparent to me from the beginning of the whole Dolezal debacle that her motives were so basic as to be boring: she’s a disillusioned white woman escaping her whiteness by adopting Black culture. That’s it. To be aware of the history of white appropriation and fetishizing of Black culture, from minstrel shows in the 1800s to blackface parties in white fraternities in the present day, is to be long weary of people like Dolezal.

The doc attempts to balance its fixation on uncovering the personal reasons behind her transformation by showing how her performance negatively impacted the Black community. Ultimately, it doesn’t tread any new ground.

It identifies the Black rage that stemmed from the platform Dolezal was given both as an activist – she was Spokane, Washington’s NAACP chapter president – and the platform she continued to receive, albeit on a massive scale, after she was outed as white. But it doesn’t go any deeper than warming over the ironic observation that America is more interested when a white woman articulates a Black experience than when a Black woman does it.

As an aside, I’ve been reading Kanye West tweets all week. So I did go into this doc with the intent that I was going to listen rather than react to a point of view that differs so radically from my own. As a Trump-loving Kanye tweeted: “We can’t add empathy to MAGA by hating. We can only add empathy with love and time and truly hearing all sides.” I’m trying, Kanye, but it truly is hard when that point of view does so much damage to your community.

Instead, my empathy is reserved for the Black members of Dolezal’s family, because the tighter she’s insisted on performing Blackness, the more they’ve suffered. Her adopted sister Esther had her sexual assault case against the Dolezal family’s eldest child, Joshua, dropped by the prosecutor. Rachel Dolezal was supposed to testify on her sister’s behalf, but it’s implied in the doc that her integrity, as a result of lying about her ethnicity, was eviscerated.

Dolezal’s 13-year-old biracial son, Franklin, bears the heaviest weight. He’s depressed and socially isolated. He repeatedly begs his mother to stop calling attention to herself on both traditional and social media because, as he rightfully points out, “This is going to affect more than just your life.” A classic white saviour, Dolezal acts like she has to keep soldiering on for his sake.

Brownson is given unprecedented access to Franklin, but this isn’t a coup. When I wasn’t bored by the doc, I was questioning its ethics. It gives a high degree of exposure to a minor who clearly states he doesn’t want it.

At one point, an off-camera Brownson asks Franklin what he wants viewers to know that they don’t already about this story. A drained Franklin responds, “Nothing that I want people to know.”

Later, he addresses the director again. “I hope this will all just go away so I can get on with my life and not worry about it.”

By this point, I largely found myself wanting the same.