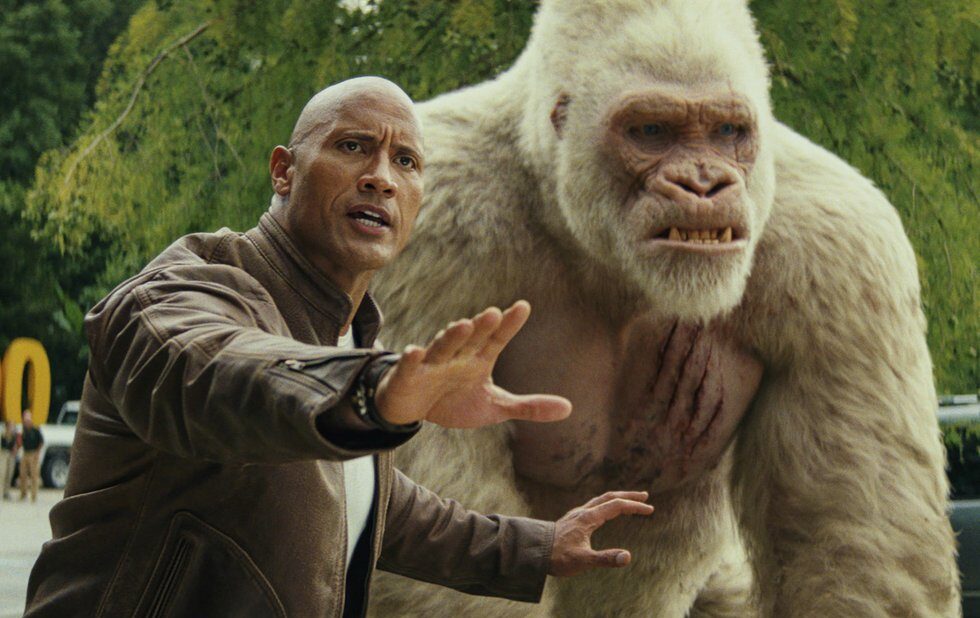 Rampage knows exactly what kind of movie it wants to be: a movie made from a 90s video game where a bunch of giant monsters smash up a city, with Dwayne Johnson and a few other people running around trying to minimize the carnage. It leans into it with enthusiasm.

Is it art? Nah. But it delivers on the giant monsters and the city smashing, and it lets you enjoy all that stuff without worrying too much about the carnage. It is the very definition of light mass-market entertainment, and I’d rather watch this again than another Transformers movie.

In a clever gesture, the story is rooted in 90s values, with a pair of scheming corporate villains (Malin Akerman and Obvious Child’s Jake Lacy, styled here as a dead ringer for Donald Trump Jr.) engineering a bioweapon that accidentally makes three ordinary animals very large and very aggressive.

One of the beasts is George, an albino gorilla raised by Johnson’s San Diego primatologist Davis Okoye. And Davis will do anything to help his friend, including racing into downtown Chicago to save him from the military strike force that’s assembling to confront the monsters.

Brad Peyton – who directed Johnson in Journey 2: The Mysterious Island and San Andreas, both of which were considerably better than they might have been – stages some inventive, complex action sequences and lets the cast have fun with the script. Jeffrey Dean Morgan pops as a high-level government spook with a cowboy swagger, and Naomie Harris commits to the technobabble as a geneticist who joins forces with Okoye.

It’s fun, it’s noisy, it has giant monsters pounding their way through a city and each other. Like I said, it knows what it is. And audiences who found Gareth Edwards’s Godzilla too oblique are going to love it.