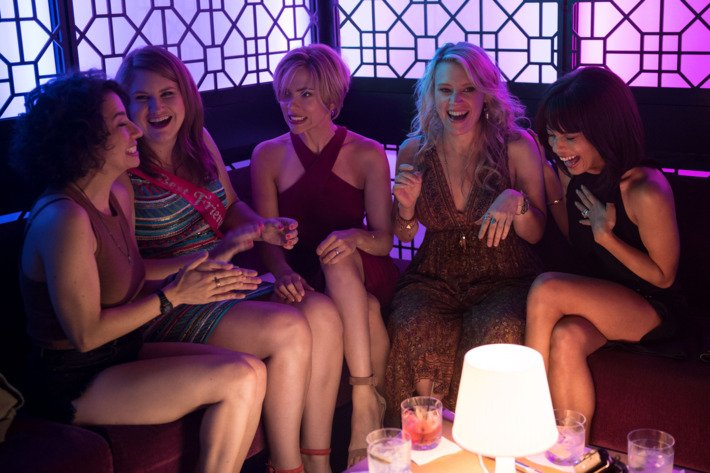 Rough Night could qualify as the all-female reboot of Very Bad Things. Writer/director Lucia Aniello (of Broad City fame) only holds on to plot beats from Peter Berg’s 1998 toxic comedy about a bachelor party gone horribly wrong, approaching with a very different tone.

Once again there’s blood pooling from a stripper accidentally killed by revellers, but the girls don’t try to hack at each other in the aftermath. Instead, they reinforce female solidarity. Led by Scarlett Johansson, these characters will snort coke and bury evidence like VBT’s Christian Slater and Jeremy Piven, but dismemberment just isn’t their thing. We want to see these women behaving badly, but not to the point that they become repulsive.

Rough Night may feel like a cop-out in that way, even stretching to make the accidental killing seem kind of righteous. It’s all in the name of having fun in the ways that so many male-centric comedies have before.

To that end, it delivers a pretty good time, not for the tiresome broad comedy stipulated by the genre, but because funny people like Jillian Bell and especially Kate McKinnon know how to wield their physicality and make the most with off-hand comments. The best laughs seem to come from the corner.

McKinnon crashing a Sea-Doo and barrelling off onto the beach is what the genre expects us to laugh at, but these scenes aren’t funny. Instead, look out for the drunk orangutan walk she does after. It’s a hoot.