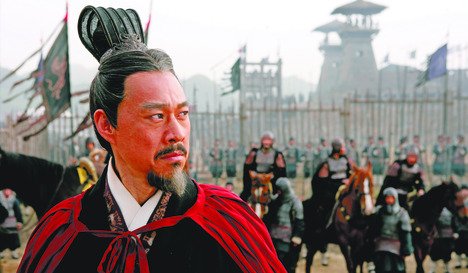 The domestic theatrical cut of John Woo’s first Chinese production since 1992’s Hard Boiled is not, by any measure, the film he set out to make.[rssbreak]

That movie – a dramatization of the pivotal clash between the forces of the Three Kingdoms in the last quarter of the 3rd century – is a full-on epic, released in two separate parts that total 282 minutes of action, drama and sprawl.

But the Red Cliff we get to see clocks in at just 150 minutes – and even if you aren’t familiar with the longer version, the editing is jarringly obvious.

Most of the material has been shaved from the first section. Character introductions, historical scene-setting and key plot developments are radically telescoped. For example, a complex storyline that involves a woman (Vicki Zhao) going undercover as a male soldier in the enemy camp has been removed wholesale.

Other subplots are rendered incomprehensible. In the opening sequence, a baby is rescued from a horde of charging soldiers by noble warrior Yu Zhou (Tony Leung Chiu Wai) in a later scene, Yu takes a moment from his martial duties to tend to a young boy’s flute. Is it the same boy? Has that much time passed? We have no idea. And the kid’s never seen again.

The first two-thirds of the truncated Red Cliff proceed with a weird rhythm, shuttling through character scenes at double speed to get to the next battle sequence.

The last third, which covers our southern heroes’ protracted final engagement with the northern armies of prime minister Cao Cao (Zhang Fengyi), is relatively intact – and the film suddenly feels like the confident, dynamic production it should have been all along. And still is, if you seek out the original version on imported DVD or Blu-ray disc.