Review: Netflix’s Another Life is back, and everything’s still on fire 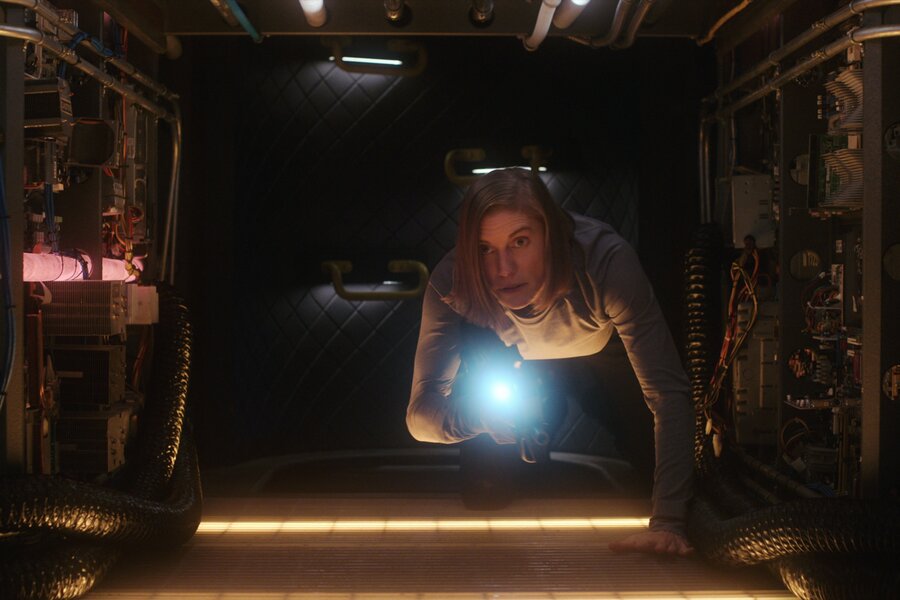 Niko Breckinridge (Katee Sackhoff) performs the time-honoured ritual of the Duct Crawl in the second season of Netflix's Another Life.

Exploding planets! Collapsing wormholes! Another case of space madness! The fate of all humanity in the hands of some very attractive astronauts!

This is the world of the sci-fi adventure Another Life, which is back on Netflix for a second season of nonstop chaos as Niko Breckinridge (Battlestar Galactica’sKatee Sackhoff) and the crew of the deep-space mission Salvare continue trying to figure out the alien race known as the Achaia, which sent a mysterious artifact to earth last season and may or may not have hostile intentions.

Okay, they were responsible for that aforementioned planet explosion; the odds on them being peaceful are pretty slim. But Niko and her team – aided by the Salvare’s sentient AI William (Samuel Armstrong) –  must hope for the best, while preparing for the worst… while back on earth, her scientist husband Erik (Justin Chatwin) does his best to figure out a way to communicate with the Achaian artifact, which has seemed pretty picky about the specific people with whom it engages.

Critics have been asked not to reveal plot points for the new season, but in all honesty I don’t know why anyone would want to. So much of the fun of this show comes from the way creator Aaron Martin (Slasher) and his writing room keep throwing new disasters at Niko and her team, while back on Earth poor Erik has to deal with an entirely different collection of problems. So let’s just say that viewers can expect a few new cast members and at least one more case of space madness.

Sackhoff once again finds just the right notes of exaggeration in her performance as Niko to let us know it’s okay to just enjoy the ride, even as other characters die left and right – or are reconfigured into alternate versions of the themselves. The Achaia are the latest in a long line of genre antagonists who use avatars of existing characters to communicate with humans in forms they can comprehend, so this isn’t technically a spoiler. However, the Achaia have not taken the time to wonder whether the humans with whom they’re communicating may want to see the specific person they choose to impersonate.

In all the chaos, we can appreciate the work of returning cast members Armstrong, Elizabeth Ludlow, JayR Tinaco and A.J. Rivera, and new additions Tongayi Chirisa and Shannon Chan-Kent; there’s also a delightfully douchey turn by Frankie Drake Mysteries’ Dillon Casey as Seth Gage, a duplicitous Homeland Security douchebag who steps in as the Achaia’s emissary on Earth, replacing Selma Blair’s shifty YouTuber Harper Glass. Casey is so good at smarmy entitlement that you cannot wait for his uppance to come.

Like I said the first time around, Another Life has no pretensions to profundity or gravitas. But that’s just fine. It’s pulp sci-fi adventure, with committed actors racing breathlessly from crisis to crisis for 10 lively episodes. It doesn’t elevate the genre, but it has a lot of fun with it. I was really happy to see it return, and happier still to find there’s an entire episode where Niko and one of her crew are trapped in a space maze by a previously unknown alien species, just because. That’s exactly what I want from this show.