Tom Hanks is forever telling stories of untested men trapped within the movements of history, interrogating the myth of American heroism 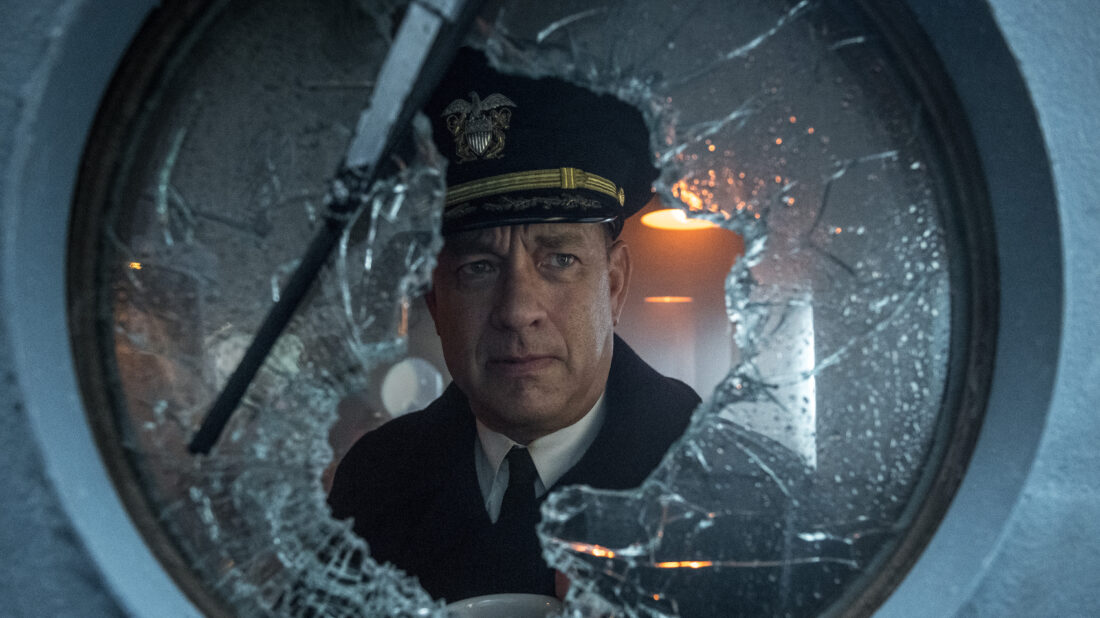 There’s a little montage, fairly early in Steven Spielberg’s Saving Private Ryan, that demonstrates the emotional heft encoded into the classical war picture: having survived the landing at Omaha Beach, Tom Hanks’s Capt. Miller is ushered away from the mess tents to be given another mission. Spielberg gives us a quick glimpse at the specific comforts Miller won’t be able to enjoy: a cigarette, a cup of coffee, and so on. The items are generic, but Hanks’s look of exhausted longing tells us everything about what they mean to him.

I don’t doubt that Hanks kept that sequence at the forefront of his mind while developing Greyhound, because Spielberg’s shorthand informs his new project constantly – as does the actor’s lifelong fascination with the Second World War. As with his love of the space program, expressed most vividly in Apollo 13 and HBO’s From The Earth To The Moon, Hanks’s interest in these pivotal points in boomer iconography is much more than superficial affectation; he’s forever telling stories of untested men trapped within the movements of history, interrogating the American myth of heroism as something innate to the national spirit.

I don’t think Hanks believes acting heroically is a conscious choice; I think he feels that’s just something we tell ourselves in order not to think about the sheer terror we must overcome in order to act. Certainly, when he plays heroes he’s always sure to show us the fear and confusion – the doubt – in their eyes.

Greyhound is about such a hero, and how he tries to endure a nightmarish situation that simply will not end. Based on a 1955 novel by C.S. Forester and set in April 1942, the story follows untested Navy captain Ernest Krause as his gunboat escorts an Allied convoy across the Atlantic towards England, and directly through a hunting ground of German subs. The movie takes place over the three days of the trip in which air support is unavailable, allowing the U-boats to stalk the convoy without fear of being bombed from above.

It’s a good, tense tale, and Hanks – who wrote the script himself, and stars as the capable but terrified commander – makes it better by stripping the story down to an almost elemental level, cutting almost everything that isn’t essential to the moment-to-moment narrative. Aside from a brief flashback featuring Elisabeth Shue as the woman waiting for Ernie back home, the action never leaves the ship; we only know what Ernie and his crew knows, and when information is spotty we are terrified right along with them.

Dialogue is reduced almost entirely to tactics and jargon, with characters shouting about rudders and pings and sweeps. It’s briefly disconcerting, and then it snaps into place: who has time to talk about anything else? Saving Private Ryan was all about the downtime between battles, fleshing out its platoon of soldiers into three-dimensional characters defined by what they chose to share of themselves; Greyhound takes a very different approach, showing us how the crucible of battle reduces everyone to their assigned function. (Two other actors stand out: Stephen Graham as Ernie’s executive officer, and Rob Morgan as a galley cook who keeps trying to get Ernie a decent meal.)

It’s also just 90 minutes long, not counting the opening title and end credits, and its efficiency feels like something else that only someone with Hanks’s track record could command. When was the last time you saw a major studio action movie that was this brief?

Greyhound is generic in the best possible way, trusting the audience to catch the visual signifiers – plates of food, shiny new shoes, a murky sonar screen – and use our understanding of war-movie narratives to fill in the blanks. And while I was surprised to see Aaron Schneider, the director of the charming Robert Duvall dramedy Get Low, at the helm of such a complicated undertaking, he’s more than up for it, deftly integrating digital and practical images in the frantic action sequences and always cutting back to Hanks to maintain the movie’s emotional temperature.

Like The Old Guard, this is a movie that’d slot right into a list of summer studio blockbusters – and while it’s a shame that people won’t get the chance to see it on a big screen, at least it’s getting a shot at finding an audience.

Just promise me you won’t watch it on a laptop.