Meryl Streep joins the the cast to make Reese Witherspoon, Nicole Kidman and Laura Dern weak in the knees 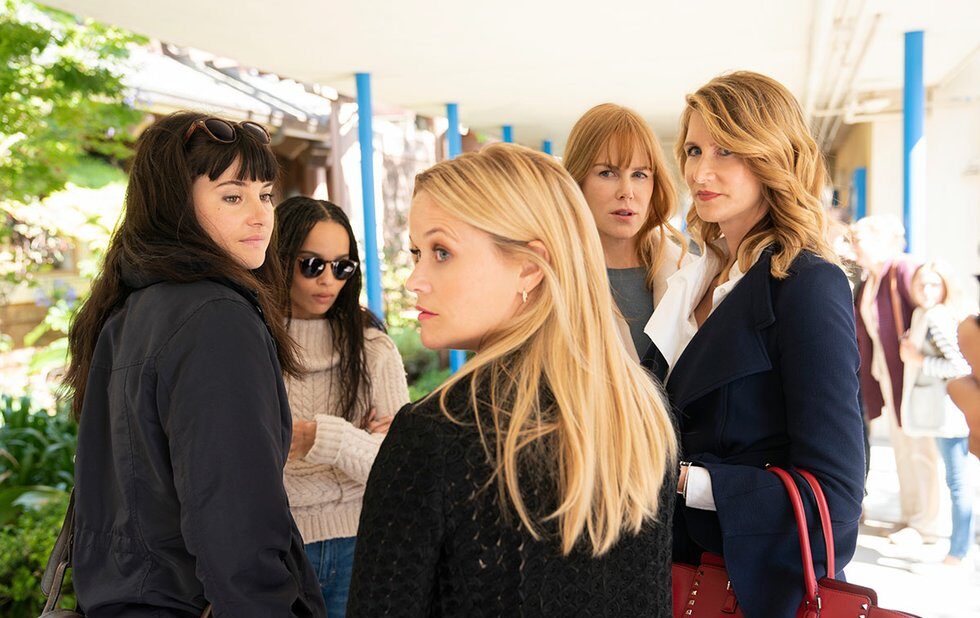 Note: This review is based on the first three episodes. Read a follow-up review of the full second season here.

In its premiere season, HBO’s Big Little Lies was seductive, sensational and still so sharply observational about its women and everything toxic in their lives. The series and its stellar cast – Reese Witherspoon, Nicole Kidman and Laura Dern, among them – quickly cut past a shameless and catty Real Housewives vibe and dealt sensitively with the trauma beneath their flawless surfaces.

And then there was the climax. (If you haven’t seen the first season, stop reading now.)

Stars aligned in one swiftly orchestrated moment. The violent relationship between Kidman’s Celeste and her husband, Perry (Alexander Skarsgård), was exposed to her friends. The lingering mystery about Jane’s rapist and the father of her child revealed itself (also Perry). The five women – who traded barbs and allegiances throughout the season – banned together when abusive Perry was fatally pushed down a flight of stairs.

Everything congealed in a way that was unbelievably convenient. But believability didn’t matter because the moment was cathartic and sincere it was a deep breath followed by emotional relief, and a tidy way to sweep up a beautifully messy soap opera.

The problem with the second season, judging from the first three episodes shown to critics, is that it probably shouldn’t exist. Originally slated as a limited series and having exhausted most of the material from Liane Moriarty’s source novel, the decision to keep going with Big Little Lies means going back to that tidy closure and unpacking its mess.

Writer David E. Kelly and director Andrea Arnold (replacing Jean-Marc Vallée) don’t just have to grapple with what it means for wealthy (mostly white) women to be responsible for murder. They have to figure out a new social and family dynamic for Woodley’s Hane and Kidman’s Celeste, what with the revelation that their children are not just classmates but siblings.

They also seem burdened with replicating the fizzy acerbic humour from the first season’s early goings, as well as the testiness between the central characters. How do they do that while dealing with such weighty issues and emotions? When it comes to characters like Witherspoon’s Madeline, the answer is to act like nothing happened and return to playing clueless.

The new season picks up as a new school year begins, months after the Monterey Five, as the women have come to be known, killed Perry at a glamorous fundraiser. As far as Witherspoon’s chirpy alpha-mom Madeline is concerned, the case is closed. The authorities seem to have eaten up the group’s “he slipped and fell” lie. And she can move on with flexing her sass at student drop-off.

Dern’s lioness Renata has a similar MO. Both Madeline and Renata are the least burdened by Perry, since neither were directly affected by his abuse, nor did they have his hands on him when he fell to his death. That latter guilt falls on Zoë Kravitz’s Bonnie, who has emotionally isolated herself, grappling silently with the trauma.

Big Little Lies is most galling whenever Madeline encounters Bonnie, looking perplexed and offended by the latter’s emotional distance as if she can’t understand why. The empathy and maturity Madeline revealed in the previous season has evaporated for the time being.

Madeline and Renata suffer their own household problems. Madeline’s husband (Adam Scott) gets wise to how much his wife has been hiding, as her past digressions return to put a messy strain on their marriage. Meanwhile, Renata’s husband is busted for financial fraud, threatening to unravel the wealthy lifestyle she fiercely flaunts and protects. If Witherspoon and Dern weren’t such magnetic performers, these sections would be nothing more than a distraction.

Our investment is with Woodley’s Jane and Kidman’s Celeste. Jane, who spent the first season haunted by her mystery assailant, seems to have found some closure in Perry’s death. She tries dating a charming and sensitive colleague (Douglas Smith) while nurturing a new relationship with Celeste and her sons.

Celeste is once again burdened with the heaviest and most complicated trauma. She needs to help her children through mourning while knowing and occasionally denying that their father was no good for anybody. Celeste misses him, too. She’s a victim yearning for her abuser, navigating what her therapist likens to PTSD.

Celeste also has to deal with Perry’s mother, Mary Louise, who is crashing at her place to help with the mourning household while low-key sniffing around into the suspicious circumstances revolving around her son’s death.

The casting of Mary Louise comes with great fanfare. When you want an actor who can make titans like Witherspoon, Kidman and Dern weak in the knees, you send in Meryl Streep.

Credit to Arnold and Kelly for not having Streep’s Mary Louise dominate from the get-go, instead allowing her to slowly ingratiate herself to the environment and gently show her teeth. Well, apart from the prosthetics she’s wearing. We see that immediately.

Even by the wickedly funny and intense third episode, where the balls start falling into place and the show starts reaching for the previous season’s heights, Streep’s Mary Louise remains the unknown quantity, a character who could drag the season down into showy theatrics or elevate the tension and bring something brilliant. The promise is there.