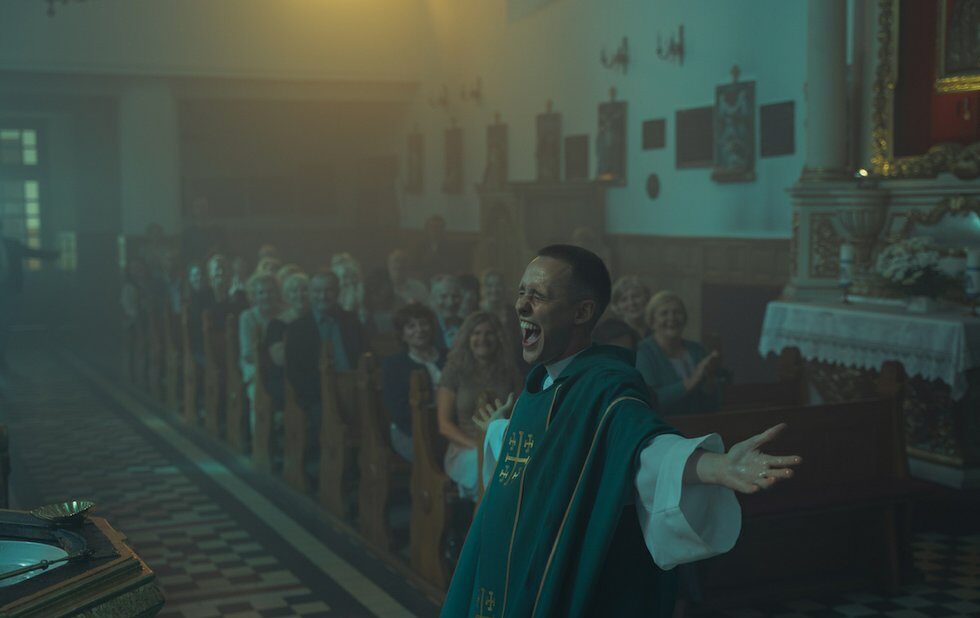 Nobody talks about The Apostle any more, huh. Robert Duvall’s 1997 drama about a preacher fleeing his own sins has sort of fallen down the memory hole, just another scrap from the American indie boom. (There’s never even been a Blu-ray release.) But I would be willing to bet that Mateusz Pacewicz loves it his screenplay for Corpus Christi has moments that seem to call back to it, reconfiguring its big questions about faith and redemption for an uglier, sadder world.

Directed by Jan Komasa (Warsaw ’44), it’s a story about the transformative power of religion – though perhaps not in the way one might expect. Starting as a bleak drama about a troubled young man (Bartosz Bielenia) impersonating a priest in a rural Polish town, it slowly opens up to a much broader perspective on belief and healing, much as Duvall’s film did.

They share the same humanistic core, as well, and a curiosity about whether God might be willing to look past the stains on a man’s soul, if that man is truly willing to convey a divine message. Or maybe it’s the stains that attract God in the first place.

Like Duvall’s preacher-in-hiding, Bielenia’s juvenile offender Daniel has a genuine affinity for religion, and a past that might explain his interest in redemption denied a path to the clergy because of his criminal record, he lies his way into a temporary position in a small-town parish, and finds the locals awfully receptive to his wobbly ministrations. He may not be able to quote scripture from memory, but he’s a good listener.

Bielenia is a magnetic presence – he has Cillian Murphy’s preternatural intensity, with an element of watchfulness and vulnerability that slowly melts away as Daniel grows into the role he’s assumed. But there are other forces at work among the townsfolk, who are still bearing the weight of a devastating loss and unsure where to put it the more Daniel tries to provide solace, the more he becomes part of a dynamic he doesn’t fully understand. And then there’s the matter of his own past transgressions.

Komasa’s rigorous direction keeps the pressure on and the focus tight, pulling every ounce of tension from Pacewicz’s taut script. The movie keeps pushing further and further in on Daniel, and on actor Bielenia, who holds the frame with a chilling stillness like a coiled predator. It’s hard to believe anyone would bare their soul to this man, especially after we see him do the things he does in the film’s opening movement – but then you catch the curiosity and sympathy in his eyes and it starts to make sense. It’s all about wanting to believe, isn’t it?

Corpus Christi isn’t a fun film to watch, and its lessons are uglier and less comforting than its competitors for the international Oscar this year. (It never had a chance against Parasite.) But if you’re in the mood for a raw, challenging European drama, you won’t want to miss it. And then go find a used DVD of The Apostle. It holds up, you’ll see.