Review: Free Guy traps us in an empty video game with Ryan Reynolds

Ryan Reynolds plays a bank teller who realizes he's a character in a computer game. Somehow, wackiness does not ensue 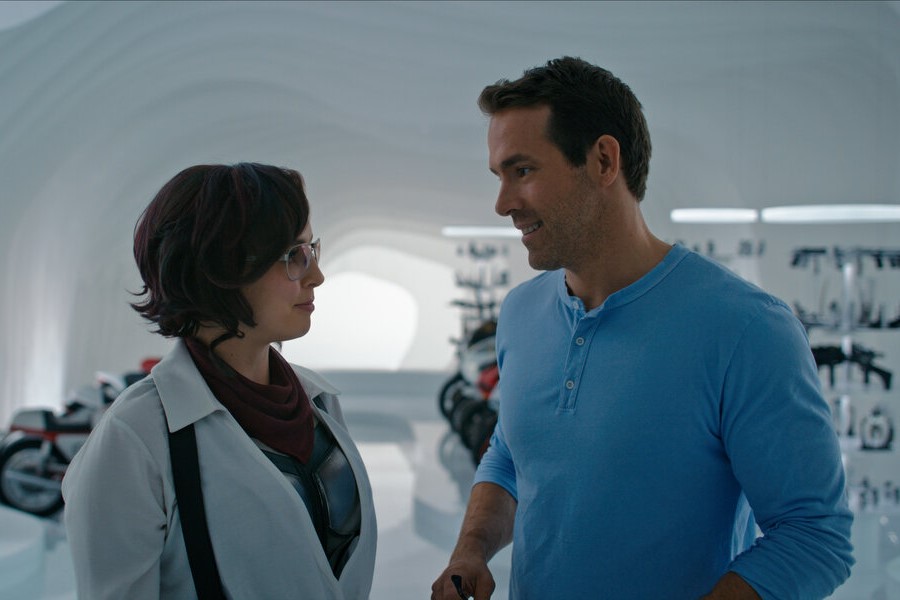 Stop me if you’ve heard this before: an unassuming, sweet-natured guy discovers that the life he lives is just a construct, and reality is something entirely different from what he believes it to be.

That’s the premise of literally dozens of novels, movies and television shows – as well the occasional documentary – and a concept that dates all the way back to Plato.

But what Free Guy presupposes is: what if the guy was actually named Guy?

And thus we have Shawn Levy’s big, empty effects comedy, which stars Ryan Reynolds as the eponymous protagonist, a genial bank teller in a mayhem game not unlike the Grand Theft Auto series. Every day is the same: wake up, get dressed, feed his fish, get coffee, go to work, get held up, cheerfully comply with whatever demands are expressed, go home, go to bed, start again.

As a comic performer, Reynolds in his sweet spot when he’s doing his cheerful-sarcastic thing – delivering withering insults with a big, phony grin. He’s so good at it that it’s weird to see him wear the grin on its own; you keep waiting for him to snap at someone. For a few minutes, Free Guy coasts nicely on that tension: what happens when Guy wakes up? And then we get the answer: what if They Live, but stupid.

Guy’s awakening comes when he falls for a player (Jodie Comer), who’s running around in the game searching for evidence of a real-world conspiracy. (We learn this far too early, because the movie doesn’t trust its audience to have the patience for a gradual reveal.) Guy doesn’t really care about MolotovGirl’s side quest; he just wants to take her out for ice cream, which is sweet in a Wall*E sort of way. (Hey, that’s another movie about an artificial intelligence that transcends its programming!) But Free Guy has no interest in sweetness: it immediately throws game cops at Guy, sending him running for his life… until he Groundhog Days back to waking up and starting over.

So it’s a time-loop movie as well as a simulation movie, which opens up possibilities that the filmmakers simply refuse to explore. Instead, Levy and screenwriters Matt Lieberman and Zak Penn go for a mash-up of The Truman Show, The Matrix and half a dozen other classic genre works, turning them all into a mushy be-yourself narrative for Reynolds’s Guy.

And even then, they refuse to let it play it out, constantly cutting away from Guy’s odyssey to spin out a B-plot about Comer’s character in the real world, trying to prove her AI engine was stolen by Taika Waititi’s swaggering tech bro. Yes, this is also a very familiar plot engine for many movies and television shows, and no, Free Guy does not appear to be commenting on how utterly derivative both of its chosen plot engines are. The closest it comes to acknowledging its slapped-together nature is in a scene where Guy is pitted against a bad guy who was released into the game before being fully programmed: instead of an actual catchphrase, the character shouts “Catchphrase!” I laughed, and then I realized there are funnier ways to play that bit, but the movie couldn’t be bothered.

Anyway, that’s Free Guy. It’s far too long and not nearly as funny as it could be, despite the wealth of talent involved. The filmmakers can’t be bothered to mine its premise for anything more than superficial, moment-to-moment activity; instead, they just throw money at the effects and the production design and assume the actors will make it all work on the day.

And Reynolds and Waititi both try very hard to invest their characters with some sort of life – to the point that it’s very easy to tell when they’re making up their own dialogue – while Comer’s just sort of around because the movie doesn’t really care about her character in either the real world or the game. Still, she still has more agency than poor Joe Kerry as her former coding partner, now an unhappy tech in Waititi’s company, who spends most of his scenes staring confusedly at a screen, trying to make sense of what he’s seeing. If nothing else, I could relate to that.