NOW MagazineMovies & TVReviewsReview: Honeyland is a documentary that feels like fiction

Review: Honeyland is a documentary that feels like fiction 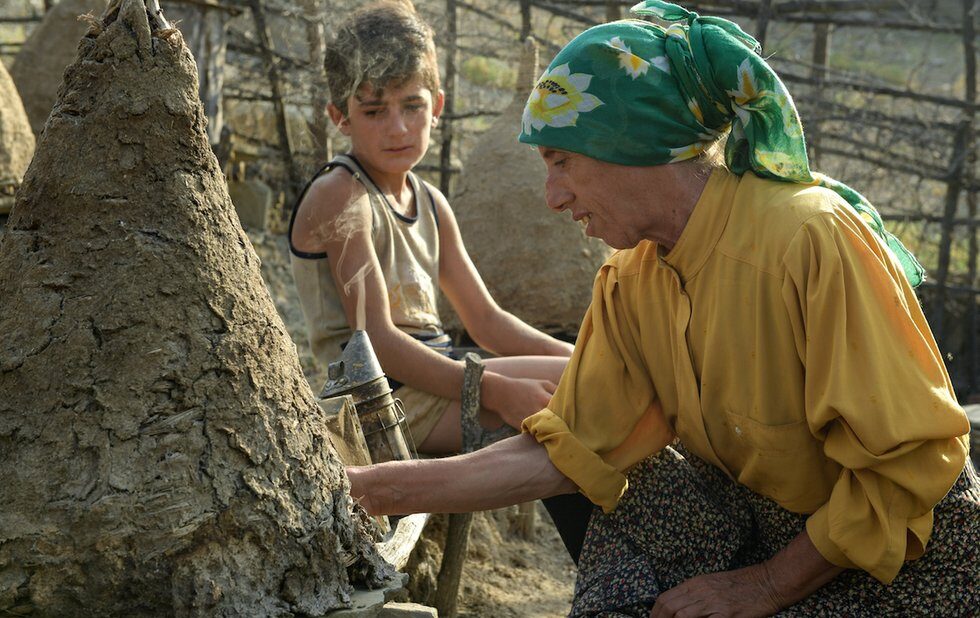 The insidious effects of global capitalism are captured in microcosmic fashion in Ljubomir Stefanov and Tamara Kotevska’s doc about a beekeeper living in an isolated mountain village in North Macedonia.

The story follows Hatidze Muratova, who scours cliff sides to tend to wild bees and sells honey at a market in Skopje. She lives a quiet life with her 85-year-old mother, who is bedridden, until a nomadic Turkish family pulls up and moves into the house next door with a massive herd of cattle. Initially wary, Hatidze warms up to the family and patriarch Hussein begins asking her about beekeeping. She magnanimously advises that he should only take half the honey and leave the other half for the bees, but Hussein is feeling pressure to provide for his seven unruly kids and ignores her advice.

Shooting in a classic observational style, Stefanov and Kotevska – who spent three years filming – could not have asked for a more perfect fairy-tale arc, but Honeyland’s storytelling power lies in their intense focus on landscape, faces, colour and ability to shift perspective. Much of the drama unfolds wordlessly, but with a clarity you might associate with fiction. We get right up close as Hussein’s family chaotically and repeatedly puts themselves in harm’s way. Those scenes contrast more intimate, candlelit moments between Hatidze and her mother that give us glimpses of backstory.

Though the storytelling could not be more precise, subtle dynamics between parents and children gradually emerge to deepen Honeyland beyond its concise metaphor for the state of the world. One of the older boys forms a bond Hatidze, who tutors him on beekeeping. But Hussein, who resents his kids for not showing appreciation toward his efforts, continually scapegoats the boy rather than admit his own mistakes. It’s heartbreaking to watch as the boy essentially adopts his father’s demeanour – lapsing into a familiar cycle. Similarly, when times grow tough for Hatidze, she begins venting long-sublimated frustrations toward her mother.

Honeyland is a beautifully realized and accomplished film, but grows more satisfying as its simple conceit gives way to more complexity.