Review: Jennifer Lopez comments on her own romantic circus in Marry Me 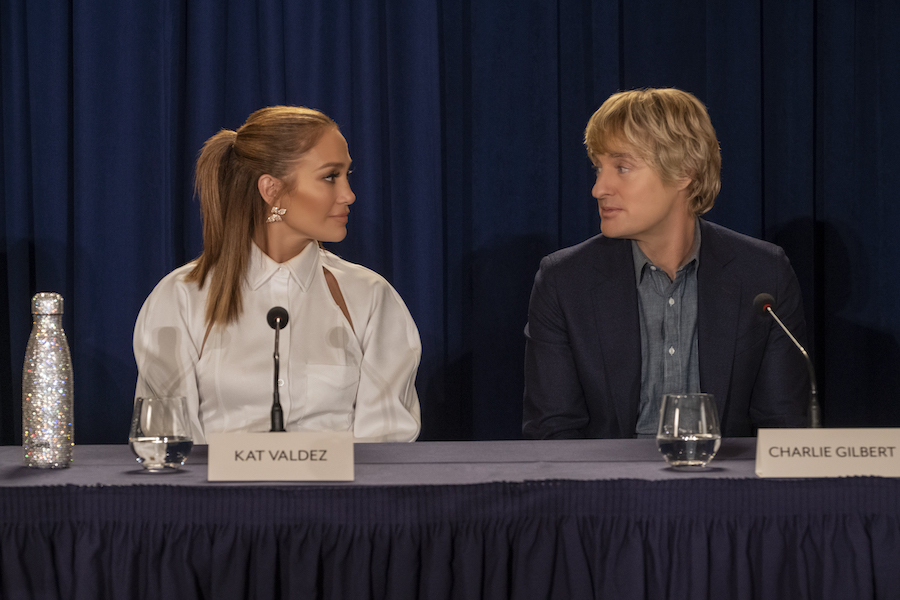 Jennifer Lopez and Owen Wilson are the rare rom-com stars over 50.

Jennifer Lopez and Owen Wilson star in Marry Me, a Valentine’s Day corny-ass multiplex rom-com. Uninspired couples are cordially invited to spend the Hallmark holiday watching the unlikely pairing of J.Lo and O.Wil (why not?) give each other puppy-dog pouts, which Owen Wilson is genetically built for.

It’s hard to hate on Marry Me, even if the movie makes us repeatedly listen to some godawful original J.Lo music while supporting characters within the movie fawn over how great it supposedly is. If you can stomach J.Lo and Colombian pop star Maluma singing “ma-ma-ma-ma-ma-ma-ma-ma-Marry-me,” you can appreciate the rare musical romance starring two actors over the age of 50 (never mind that one of them looks impossibly fit for her age).

There’s also something cute about Lopez using Marry Me to comment on the circus her own love life has been on social media and in the tabloids. Her character, pop star Kat Valdez, has also been thrice divorced. And her latest romances are curated fodder for Instagram stories, much like Lopez’s recent public displays of affection with Ben Affleck. She and Affleck were just photographed canoodling on the Marry Me premiere red carpet, where Lopez was sporting a short wedding dress.

Back to the movie’s character, though, which is purposefully conflated with the actor playing her. We meet Kat as she’s preparing for her own nuptials to another famous singer named Bastian (Maluma). They’re getting married in front of an audience at a live concert, while streaming to 20 million fans. But just before the vows, Kat and the rest of the world discover Bastian’s recent infidelity. Humiliated, desperate and defiant, Kat picks a stranger in the crowd to marry her instead. That stranger is Wilson’s buttoned-up single-dad math teacher whose name I can’t remember, which feels appropriate.

The whole silly and preposterous fairy tale is about how a global superstar can decide to pair up with the most average person. It’s a gender-flipped Maid In Manhattan, with Lopez throwing off the glass slippers instead of slipping them on.

The asinine writing and pedestrian direction do nothing to make any of this convincing. But it’s all forgettable enough that you quickly (or perhaps desperately) appreciate the bits in Marry Me that feel just a tad genuine, even if they’re also self-serving.

Marry Me can feel like a plea for empathy from Lopez, whose Kat invites Owen Wilson’s Charlie into her life as if he’s our eyes into modern celebrity lifestyle, where intimacy is monetized, every bit of a daily routine is sponsored content on social media and there’s barely a moment that won’t be scrutinized by the cameras.

This is not particularly revelatory, but it’s one of the few things to appreciate alongside the generally likeable onscreen presence of Lopez, Wilson and supporting players like John Bradley and Sarah Silverman. They can be okay company, even when your Valentine’s Day date isn’t.