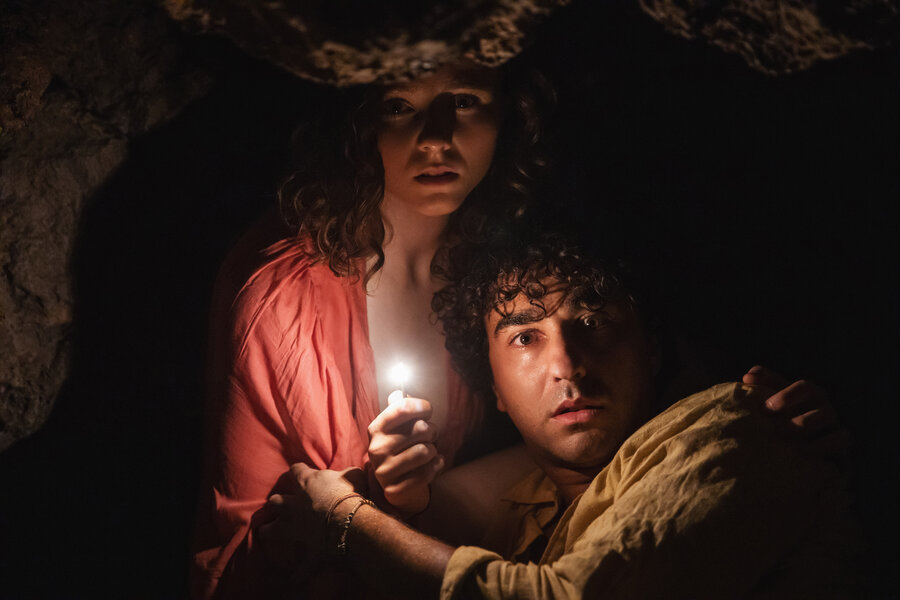 Thomasin McKenzie and Alex Wolff struggle to see the light.

I am at a disadvantage with M. Night Shyamalan’s Old, because I have read Sandcastle, the 2010 graphic novel by Pierre Oscar Lévy and Frederik Peeters on which Shyamalan’s film is based.

Both the graphic novel and the film tell the story of a group of unassuming strangers whose afternoon at a magnificent, secluded beach becomes an existential nightmare, as everyone finds themselves aging at an accelerated rate – roughly two years per hour.

They can’t leave the beach or summon help; all they can do is trade theories about why it’s happening. Children are thrust into adolescence without the proper mental or social preparation; adults are vaulted into middle age, and so on. All the while, the waves roll onto the beach, indifferent to the human suffering.

Sandcastle is an existential nightmare of infirmity and mortality, forcing its characters to confront the truths we all try very hard to ignore: that flesh is fragile, that death always comes sooner than we’d like, and that by bringing children into the world we’re dooming them to the very same experience. (There’s also some none-too-veiled commentary about European classism and nativism in the way the story plays out, with an entitled white character trying to convince the others that a foreigner is somehow responsible for the situation.)

Old takes the premise, the setting and some of the character dynamics, and reshapes the material into something marginally more commercial. It’s got jump scares, gross-out body horror and additional plot elements intended to create a more satisfying experience than the graphic novel offered; if you’re not familiar with the original text, it might even work from moment to moment… though as with most of Shyamalan’s recent output the whole thing collapses the moment the credits roll.

Which isn’t to say Old is as actively self-defeating as Glass, that plodding and bone-headed attempt to weave Unbreakable and Split into the stuff of grand tragedy; here, at least some of the actors are allowed to deliver dialogue in a reasonably naturalistic manner, and the narrative is suffused with dread.

Shyamalan also gives the characters a little more depth than Lévy and Peeters cared to: we spend enough time with the family at the core of the story to understand their dynamic isn’t perfect – Mom (Vicky Krieps) and Dad (Gabriel García Bernal) are going through some stuff, and 11-year-old Maddox (Alexa Swinton) is dealing with it a lot better than six-year-old Trent (Nolan River).

A brief prologue at the resort that borders the beach sketches out the dynamics of some other vacationers, including a haughty doctor (Rufus Sewell) who’s brought his elderly mother (Kathleen Chalfant), his much younger wife (Abbey Lee) and their six-year-old daughter (Mikaya Fisher) to the resort, and a professional couple, nurse Jarin (Ken Leong) and psychologist Patricia (Nikki Amuka-Bird). There is also a hip-hop star (Aaron Pierre) around, whose name is Mid-Sized Sedan because it turns out M. Night Shyamalan is even more of a square than I am.

The fact that nearly all of the action takes place outdoors means Shyamalan can’t fall back on the airless, heavy atmosphere he loves so much, so the performances can be a little looser than usual. (That said, the cast can still be felt labouring to make their director’s clunky, declarative dialogue sound naturalistic.) Jojo Rabbit’s Thomasin McKenzie, Pig’s Alex Wolff and Sharp Objects’ Eliza Scanlan eventually turn up, in roles that are basically unplayable no matter how hard Shyamalan tries to adjust the material.

Again: this will almost certainly work better, from moment to moment, if you aren’t familiar with Sandcastle and don’t know how badly Shyamalan is missing its point. The technical specs of Old are all top-flight, from the slightly calculated corporate lushness of the resort to the relative subtlety of the makeup and visual effects. (Trevor Gureckis’s score is impressively minimalist, as well.)

And fans of the filmmaker will continue to enjoy his usual tics: the measured pacing, the carefully arranged plot, the deliberate camera movements. This time around, Shyamalan and cinematographer Mike Gioulakis use protracted panning shots from one character to another and back again, all of them trapped on that vast, inescapable beach.

I wonder whether the ending will work for anyone, though, as Shyamalan reconfigures the hopelessness of Sandcastle into something a little different, which allows him both a final rug-pull – such as it is – and the least effective expository epilogue since Psycho. He’s never shied away from his status as the new Hitchcock, so maybe something like this was inevitable. But I can’t see it working with audiences who’ve white-knuckled their way through what’s come before.