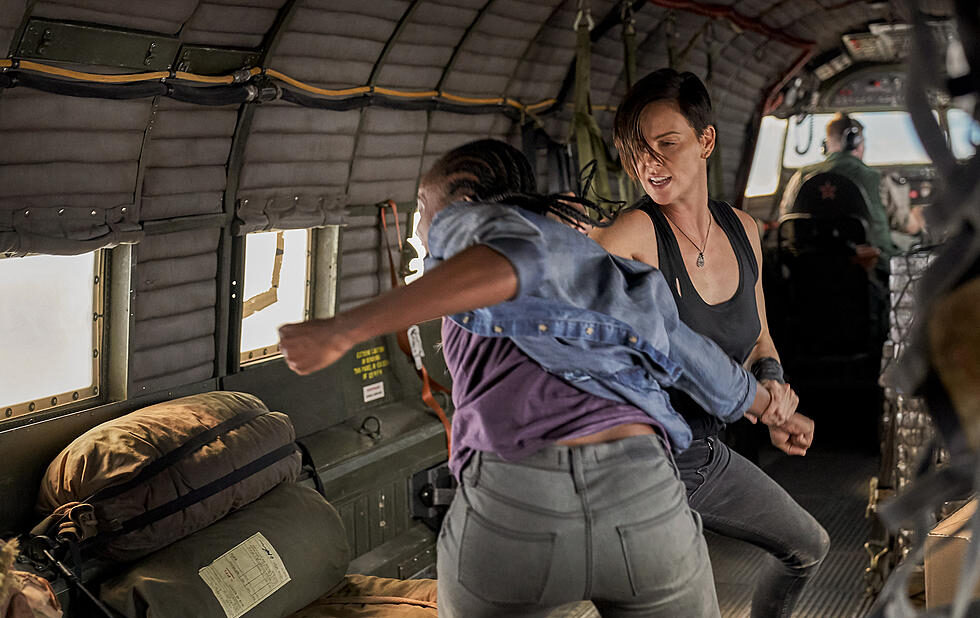 What would happen if Highlanders didn’t need to kill each other, and were happy to work together instead? You’d get something like writer Greg Rucka and artist Leandro Fernandez’s comic-book series The Old Guard, about immortal warriors who’ve long since stopped trying to figure out why they are what they are, and choose to spend their time fighting for causes they deem worthy.

Adapted for the screen by Rucka himself, the Old Guard movie finally breaks the curse of Netflix’s high-octane, A-lister action junk like Triple Frontier and 6 Underground, movies that wasted some very pricey talent in grim, grinding thrillers that promised complexity but settled for noise and gore.

The Old Guard offers all of those elements as well, but director Gina Prince-Bythwood embraces the pulpier aspects of her source material, and makes the mixture sing. I have to admit I didn’t expect that from the director of Love & Basketball and Beyond The Lights, but she brings a rich sense of humanity to what could have been a mechanical cat-and-mouse action thriller; her movie is filled with little glances and asides that speak to the literally ancient history its characters share.

Most important of all, she’s got Charlize Theron, who is just so much damn fun to watch as team leader Andy, who’s been around for millennia and has refined herself to a sharp point; unlike so many other actors who’ve played undying, ancient characters, Theron seems to have spent some time thinking about what would and wouldn’t be important to someone who’s literally been everywhere and experienced everything. She has fun with the character’s lack of fun, if that makes any sense, and it keeps us watching her to see what she’ll do next.

There’s a moment about a third of the way into The Old Guard where Andy is surprised by something, and Theron plays it for delight instead of shock: she didn’t think that was still possible. It flickers across her face for barely a second, but I remember it a week later. Most action movies don’t have room for that sort of thing, and I’m really happy this one does.

Which isn’t to discount the rest of the absurdly overqualified international cast, which also includes Matthias Schoenaerts (Disorder, The Mustang), Marwan Kenzari (one of the few good things about Guy Ritchie’s awful Aladdin remake) and Luca Marinelli (Martin Eden) as Andy’s eternal comrades-in-arms, If Beale Street Could Talk’s KiKi Layne as their newest member, a Marine whose immortality activates when her throat is slashed in Afghanistan, and Chiwetel Ejiofor as the ex-CIA operative who’s discovered their secret.

Seriously, the entire movie is cast above its station: that’s Romanian legend Anamaria Marinca (4 Months, 3 Weeks And 2 Days) in the thankless role of a genetic researcher who works for the movie’s heavy (Harry Melling), a callow pharma bro who isn’t quite as menacing as the film wants us to believe. But he does shout a lot.

The Old Guard is both serious enough to justify its mission and smart enough to have fun with its premise: it’s Highlander without the in-fighting, and a lot more ordnance. The cast has fantastic chemistry, the story moves fast enough that we don’t have time to ask pesky questions about travel logistics and issues of international finance, and the action sequences are smartly staged and even essential to character development: just because our heroes can survive any injury doesn’t mean they’re impervious to pain, so the decision to step in front of a squad of armed paramilitary goons still carries some weight.

And over time, almost without us noticing, the grudging bond between Theron’s leader and Layne’s rookie becomes the movie’s heartbeat. I wasn’t expecting that, either. What a pleasant surprise.