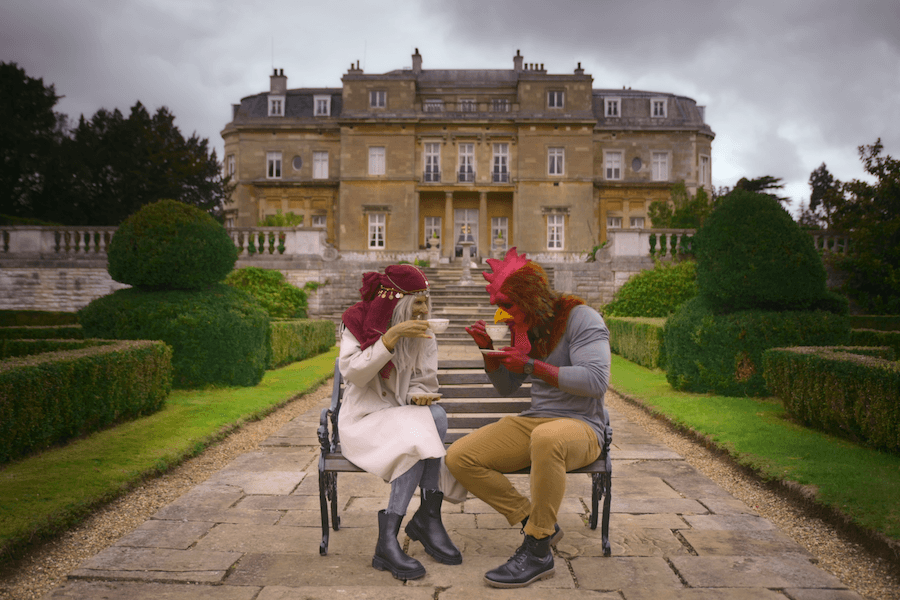 Dating with masks has become a reality during the pandemic – and now it’s a reality TV dating concept.

In a format that crosses Love Is Blind with The Masked Singer, Netflix’s Sexy Beasts employs elaborate, Hollywood effects-style makeup so contestants can forge a connection that is ostensibly more meaningful than one predicated on physical attraction.

“Could you fall in love with someone based on personality alone?” narrator Rob Delaney (Catastrophe) asks in the opening sequence. In a way, it’s refreshing that the show never seems particularly interested in answering this question.

As Delaney’s deeply ironic and blatantly condescending asides throughout this six-episode series suggest, anthropological inquiry into the human condition is no more a focus on Sexy Beasts than on, say, Naked Attraction – another ridiculous, British-produced blind dating show thinly framed as sociology experiment.

Fortunately, Sexy Beasts is sparing us the pie charts and textbook lessons. It’s an out-and-proud guilty pleasure and the cast is very much dressed – transformed from the neck up into pandas, dolphins, zombies, scarecrows and other anthropomorphic creatures, real and imagined (a smattering of makeup on hands and necklines adds continuity).

The primary challenge for the producers of Sexy Beasts is a familiar one: finding new ways to catch the audience off guard with a format that becomes repetitive very quickly. It’s bookended by strong, well-cast and genuinely funny episodes, but the middle of the series settles into a groove that is frequently less about the journey and more about the reveal.

It goes like this: one sexy single is presented with three sexy contestants, and all are wearing un-sexy effects makeup. After a round of speed dating, one of the three is booted off in an awkward-yet-overblown dumping ceremony at “Sexy Beast manor” and the remaining two go on more involved dates in the second act. Locations include a nude life-drawing class, ice sculpting, an amusement park, axe throwing, skeet shooting, etc. Finally, the winner is chosen and masks come off in a hot-or-not moment set in the manor’s twinkling shrubbery.

Episode one, entitled Emma The Demon, manages to throw a few curveballs at the audience that make up for a plainly inevitable conclusion. Like most of the daters on this show, American model Emma is tired of being superficially judged for her good looks. She’s dressed as a red devil with pointy facial features yet can’t seem to keep a straight face with former pro volleyball player and self-described “boobs guy” Bennett (dressed as an ape), British student Archie (dressed as a “stone man”) and Brit Adam (occupation unknown, dressed as a mouse). “It’s going to be hard to choose,” she says toward the end, not even trying to conceal her laughter.

Along the way we get a drawn-out foot fetishy moment that seems aimed at stoned viewers, some lo-fi psychedelic editing effects and LOL narration from Delaney that leans hard into the incredulity of it all. Oh and B-roll – lots and lots of B-roll of the contestants sexily preening and posing in a studio during all the double entendre-laden expository narration.

Almost every garrulous person on this show seems like they probably have an agent, but the producers do a decent job of mixing and matching people with varying degrees of self-awareness. Kariselle, a panda from New Jersey is the chattiest of the singles, hyper-analyzing every moment to the nth degree and giving Delaney’s voiceover a run for its money. Meanwhile, the overconfident werewolf Ibrahim seems destined for disappointment.

The final episode, Kelechi The Rooster, pairs a pharmacy student from Tennessee with a trio of women who are often so sharp and quippy you have to wonder if the producers are feeding them lines. It’s the only episode in the series in which the final choice is genuinely suspenseful, though the moment is undercut by the nagging feeling that these women deserve each other more than they do the cocky rooster. Or perhaps some sort of polyamory twist is in order? (Hello, season two!)

Everyone on this show looks like they are from central reality TV casting. The jokes occasionally cross over into the kind of caustic meanness that is synonymous with British reality TV, but the masks and makeup are impressive enough to make it hard to turn away from even the most banal and cliché moment. One of the most effective format beats is simply the long, slow zoom-ins set to action-movie music of each contestant in their grotesque mask as they wait to find out who will get the chop.

At best, Sexy Beasts works as a mocking parody of blandly heteronormative reality dating shows that manages to skewer its earnest concept without really subverting it beyond the masks.