Review: Palm Springs is a time-loop movie with infinite heart 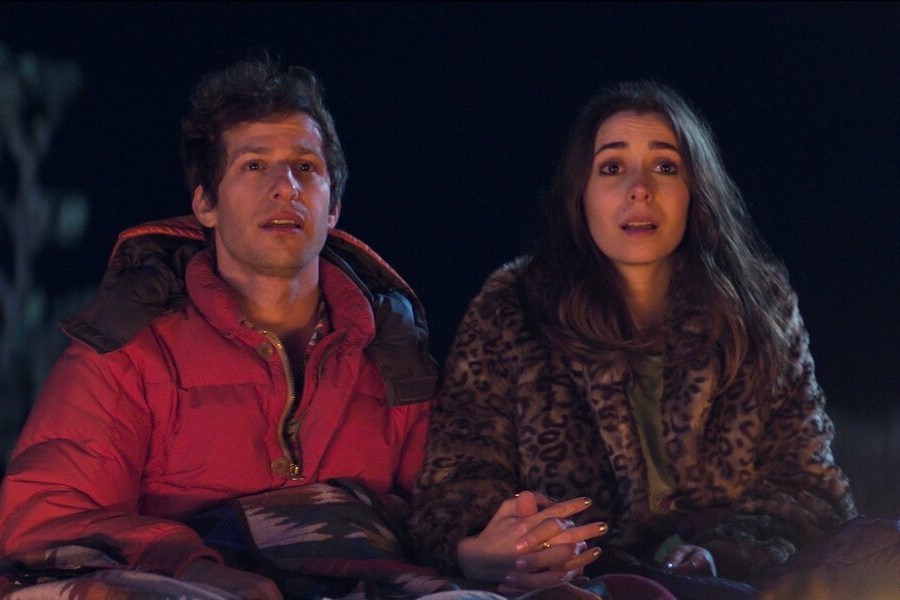 Palm Springs is a time-loop movie about a young woman named Sarah who – through a quirk of physics and some misplaced empathy – gets stuck repeating the same day, over and over and over again. She’s not happy about it, and not just because it’s the day of her sister’s wedding, an event about which Sarah’s feelings are mixed at best. No, the bigger problem is that she’s stuck in there with someone else, and he’s kind of a tool.

The other guy’s name is Nyles, and he’s been in the loop for so long that he’s resigned to his fate, making the most of his limited world (no hangovers, no responsibilities, no limits) and being kind of a dick about the existential crisis Sarah is experiencing as she realizes she, too, is stuck in a hell of warm Champagne and bridesmaid dresses. Nyles has no patience for Sarah’s horror. Sarah has no patience for Nyles’s over-it attitude.

Oh, and Palm Springs is a love story.

To go any further into the plot would be a terrible thing – audiences at January’s Sundance premiere didn’t even know Palm Springs was a time-loop movie, and that must have been a blast. But the genre of choice has been baked into the marketing, which is clever in its way, and even though it’s taken forever for the film to reach Canadian eyeballs after dropping on Hulu in July, it’s entirely worth the wait.

Palm Springs is a little gem of a romantic comedy, as well as a really clever variation on the Groundhog Day genre. Andy Siara’s script – shaped in collaboration with star Andy Samberg and producers Jorma Taccone and Akiva Schaffer under their Lonely Island Classics banner – crafts an ingenious and unsettling metaphor out of Nyles’s cyclical hedonism that’s perfectly suited to Samberg’s skill at playing chatty, enthusiastic character: Nyles is who Brooklyn Nine-Nine’s Jake Peralta would be if he gave up on trying to evolve. The world’s not going to grow, so why should he?

But then there’s Sarah, who can’t accept that this is all there is, especially if she’s trapped there with this jackass. Cristin Milioti snaps into the role just as easily as Samberg does into Nyles; it’s a master class in tiny little cues, her expressive features telegraphing Sarah’s emotional state to the camera even as she struggles to hide it from the people around her. It’s a marvelous performance – and one that grows richer on repeat viewings. (Trust me on this.)

I’m talking around a lot of stuff here, and I’ll have to do that about J.K. Simmons well; he might have the trickiest role in the entire movie, and he pulls it off so effortlessly that I didn’t fully appreciate it until hours after the credits had rolled. I would also say the same for Max Barbakow, who’s made a first feature that feels like the work of a veteran comic director, highlighting the performances while creating a cohesive world around them.

And that world is remarkable. Palm Springs could have been a fun little diversion, but it grows into something so much more: a movie about relationships and commitment, and about growing with someone – and what it takes to choose to be a better person when the world doesn’t really care what you do.

It’s also, rather incredibly, a film that speaks to the current moment better than almost any other: we’ve all had to come to terms with our own time loops this year, knowing that tomorrow will be exactly the same as yesterday and feeling powerless to change our trajectory. (It’s definitely a good thing that Palm Springs drops in Canada the week that COVID vaccinations begin, and it’s finally possible to imagine this long, muted crisis coming to an end.)

Maybe Palm Springs should be the last time-loop movie. It certainly sends the genre out on a high.