Unlike so many sitcoms that grow formulaic with age, CBC's hit comedy has actually become smarter and wittier as it enters its final season 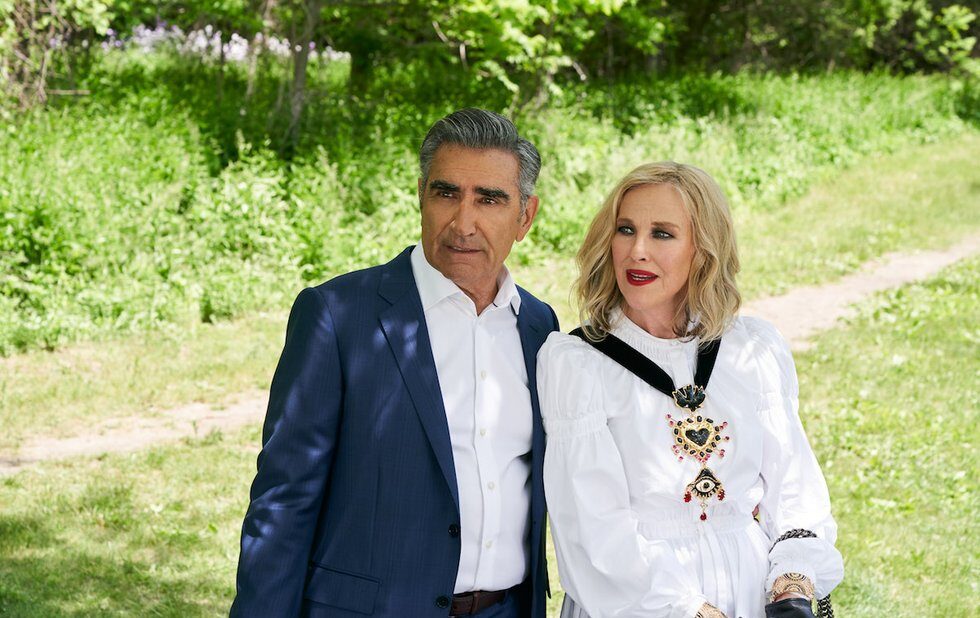 This review contains minor spoilers for episode 1 of season 6.

In the final moments of Schitt’s Creek’s season five finale, Moira Rose (Catherine O’Hara) is crumpled on the floor of the motel room closet, weeping and inconsolable after learning her comeback vehicle The Crows Have Eyes III: The Crowening has been shelved.

The season six premiere opens with Moira in the same position, although she’s in a different wig (naturally) and has created a makeshift bed underneath her husband Johnny’s button-ups. While the rest of the Rose clan has made strides in their love lives and careers, Moira’s star is once again stymied, this time by an industry that doesn’t appreciate the artful horror of avian-humanoid transmutations.

Who knows how long she would’ve remained in her self-imposed exile (when we find her it’s already been a week), but she’s forced to evacuate when the town’s mayor Roland (Chris Elliott) starts a toaster oven fire in the room next door. The fresh air has a clarifying effect, as Moira explains “she’s been gifted a smoke signal,” and tells Johnny (Eugene Levy) that she’s giving up showbiz forever and giving her “final bow.” A phoenix rising from the ashes is an apt metaphor for Moira.

Unlike so many sitcoms that grow increasingly formulaic and stale as seasons add up, Schitt’s Creek is that rare gem that has actually become smarter, wittier and more lovable as it ages. (And not that award shows are always the best barometer of good TV, but they did get it right when Schitt’s Creek was nominated for four Emmys last year.) Now in its final season, the Rose clan is back in their lovingly dysfunctional true form.

The CBC sitcom follows the story of the Roses, the former one-percenter, Kardashianesque family who lose everything and are forced to move into a motel in the small town they bought as a joke. While the early seasons get most of their laughs from fish-out-of-water scenarios involving Johnny, Moira and their two self-absorbed adult children David (Dan Levy) and Alexis (Annie Murphy), the sitcom has expanded from this original conceit.

In the latest seasons, plotlines have been less focused on finagling escape plans and instead centred on the sweet evolution of the Roses and the unlikely relationships they’ve formed with townies who become their business partners, love interests and best friends. Judging from the first four episodes of season six that were sent to critics, the sitcom isn’t planning to upend this ethos. Those feel-good relationships, which are never overly saccharine thanks to the show’s signature sardonic wit, are what makes Schitt’s Creek so bingeable and immensely enjoyable.

In season six, big changes are coming for the Rose family: David and Patrick (Noah Reid) are getting married after successfully revamping the Rosebud Motel and getting a glowing review from a travel blogger, Johnny is eyeing a Rosebud Motel expansion with his business partner, Stevie (Emily Hampshire) and Alexis is gearing up for six months of perfect beach-wave curls during her sabbatical to the Galapágos with her veterinarian boyfriend Ted (Dustin Milligan).

Meanwhile, Moira and Johnny celebrate her freedom from self-imposed exile with a picnic along Schitt’s Creek’s eponymous waterway – “hard to believe this is our first time down to the creek,” says Johnny – they’re interrupted by a call from her agent, who informs her The Crows is back on, having been picked up by a new streaming service called Interflix. “The industry has come crawling back to me on all fours,” Moira proclaims triumphantly. Schitt’s Creek has also been highly quotable (as evidenced by the trove of gifs that inundate Twitter), but the writing is even sharper this year. O’Hara’s delivery of one-liners is especially meme-able, as she remains the funniest character on the show.

Schitt’s Creek has been lauded for its nonchalant, progressive take on LGBTQ issues, which will be a highlight this season as David and Patrick start planning their wedding. In the first episode, the couple tour a potential venue, a well-groomed manor that David describes as “the only venue for miles that doesn’t look like a crime scene from a missing person docu-series.” As David, Levy has opened up to reveal his vulnerabilities and sentimental tendencies, a character arc that has made his relationship with Patrick a fan favourite.

His best friend, Stevie, is due for her own uplifting character arc. After starring as Sally Bowles in the town’s production of Cabaret, in this season Stevie is contemplating her next move as she realizes her friends seem to have it all figured out. Stevie has acted as the relatable, grounded centre of the show, so we’re expecting big things from her storyline this season. More musical appearances? A bigger role in Rosebud Motel? At the very least, a tearjerker of a maid of honour speech.

Now, for a little bit Alexis update: while she counts down the days until she’s reunited with Ted – minor spoiler: she pulls a very classic Alexis and gets the numbers confused on her plane ticket, thus delaying her trip – she elects herself Moira’s publicist. It’s been a delight watching Alexis become slightly less narcissistic over the seasons, thanks in part to her relationship with dad-joke-loving good guy Ted, and partly due to the warmth that Murphy infuses into a character who, on paper, should be insufferable.

The sixth season feels like it’ll be a victory lap for the beloved sitcom that’s amassed a cultish following and a syndication deal with Fox. But Schitt’s Creek’s final run is not like that of an aging, declining athlete who goes back for one final season in a sad attempt to prolong their youth. The show is happily living out its golden days.