Review: Spider-Man: No Way Home is fanfare that goes nowhere 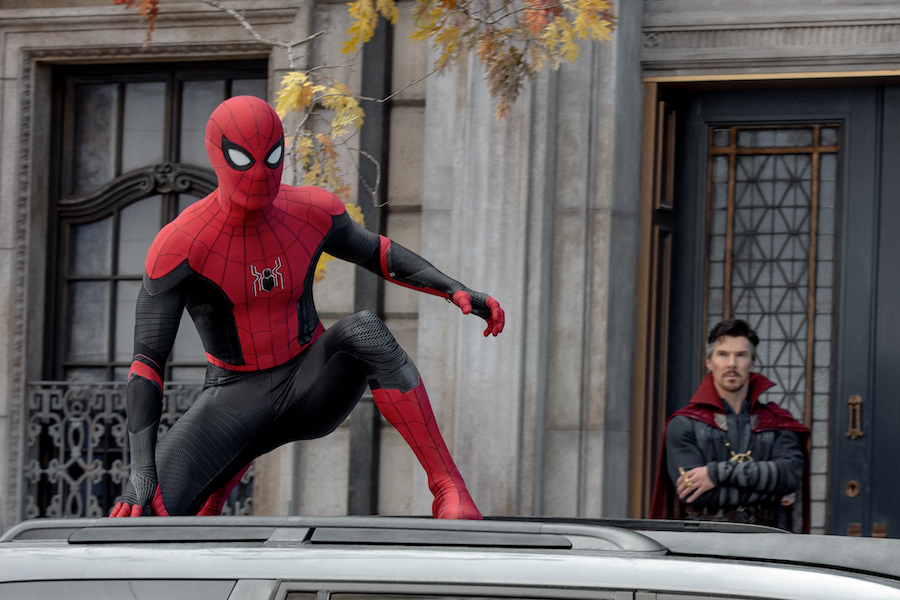 You know in WrestleMania when the matches keep pausing so some starry personality – whether it’s John Cena or the Ultimate Warrior – can unexpectedly run (or dance or skip or hop) out from the wings? That’s what Spider-Man: No Way Home feels like.

The latest laboured movie in Tom Holland’s up-to-this-point winning iteration of the web-slinger is all about webbing characters through multiverse magic from previous iterations of the franchise to deliver fleeting dopamine hits. Familiar faces – some who I thought we agreed we were tired of – make surprise appearances to fanfare that commands excitement and rewards fealty.

You know Alfred Molina’s Doc Ock, Willem Dafoe’s Green Goblin and Jamie Foxx’s Electro are back because they’re featured in the trailer. Critics were repeatedly instructed not to spoil the remaining multiverse guests, probably because the movie doesn’t have much else to offer. Like those wrestlers who would work up the crowd by flaunting their own presence, No Way Home is satisfied with itself for just daring to resurrect dated contracts and negotiate new terms to bring all these old players into the MCU ring.

The whole multiverse thing with its alternative dimensions and timelines – which were so brilliantly and joyously plundered in Spider-Man: Into The Spider-Verse – is becoming the Marvel Studios strategy to reset and renew our subscriptions to the brand. So we can expect a whole lot more like this to come, which is too bad because I was genuinely enjoying the Spidey movies.

As Peter Parker and MJ, Tom Holland and Zendaya bring such fresh energy and charisma to familiar roles. They pick up exactly where they left off in the previous instalment, Far From Home, swinging through the Manhattan skyline just as J. Jonah Jameson (J.K. Simmons, serving as the first of many retconned franchise players) reveals Spider-Man’s secret identity and begins an alt-right-like campaign painting the friendly neighbourhood hero as a public enemy.

No Way Home’s best moments are in the early goings, as Holland’s Peter and Zendaya’s MJ try to steal some away some alone time and seek normalcy while the whole world is watching. Considering their own celebrity wattage, this is obviously a performance these actors can easily shrink into. To rectify matters, Parker seeks out his mystical Avengers buddy Doctor Strange (Benedict Cumberbatch). The latter conjures a spell to make people forget that Parker is Spidey. The spell backfires and cracks open the multiverse.

What follows beyond the typical dimly lit and incoherent action sequences are admittedly cute and vacuous little sketches where Holland, Zendaya and Jacob Batalon as Peter’s best friend Ned get to interact with an older generation of actors that have meddled with these superhero tights before. The actors make it agreeable if not memorable. But the movie struggles to figure out what to do with them beyond dropping in recognizable lines and references to make fans nod in recognition, as if looking backwards is somehow going to move this story forward.

There is a heavy serving of force-fed emotional weight when Peter decides to help the tourist villains with their cognitive or emotional issues. But that very quaint approach doesn’t muster up any commitment or feeling. Spider-Man doesn’t exactly have the time to talk through people’s problems and develop empathetic connections in this over-crowded two-and-a-half-hour circus. Instead, his solution is programming some Tony Stark technology to produce instant bad guy cures in gas, elixir and microchip form. Gratification at the push of a button is the best we could expect from the shiny new brand, really.

Dimension-hopping bad guy assemblage, heavy doses of nostalgia and ugly CGI grandeur is nothing new in the MCU. But it’s light years detached from what makes the best Spider-Man movies so affectionately fun. They’re not about the fanfare. They’re about a charmingly humble superhero carrying a backpack.