Even if the series could move faster, Patrick Stewart still has tons of charisma as the thoughtful, reticent lead 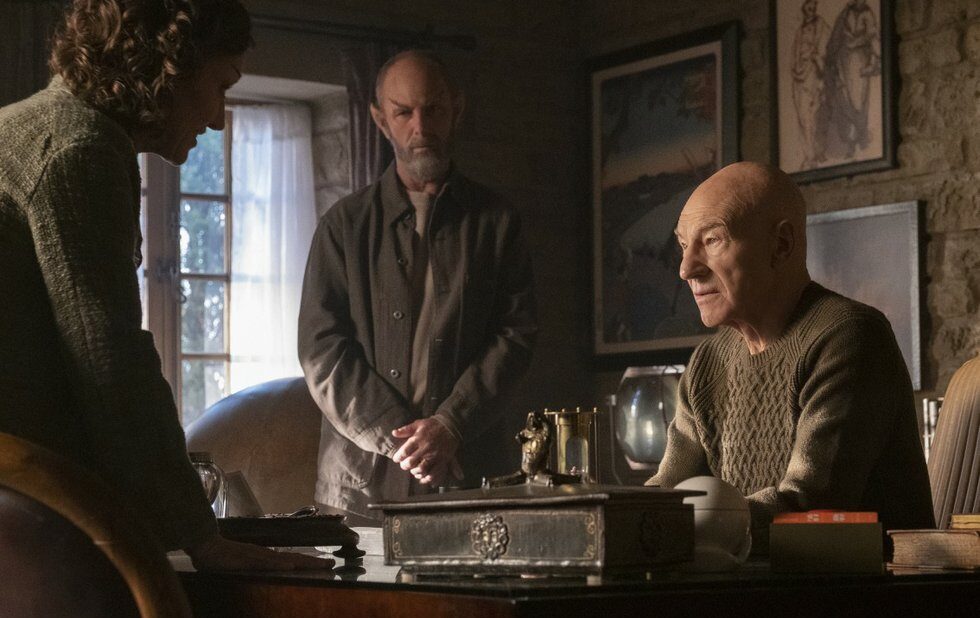 It’s been 18 years since we last saw Jean-Luc Picard on the deck of a starship. Things are different now: he’s older, obviously, and a little slower. But he’s enjoying his golden years, maintaining his family’s vineyard with a couple of pointy-eared friends and a dog named Number One.

And he still looks like Patrick Stewart, which is the most important thing. The English actor’s return to the role that made him a star, and defined Star Trek for an entire generation, is the real hook of Star Trek: Picard. We just want to see what the guy’s up to, really.

I’ve been asked not to reveal too much about the plot of this new series, which returns to the world of The Next Generation, Deep Space Nine and Voyager for the first time since Star Trek: Nemesis milked the franchise dry in 2002.

So let’s just say that it opens on Earth in 2399, a decade and a half after a cataclysmic attack on Mars – which, if you’ve been watching the Short Treks vignettes on Crave, you’ve already seen. (The Trek machine is very big on cross-platform narratives.)

The fallout from that incident led Jean-Luc to resign his commission, and he’s lived peacefully in France ever since. But the galaxy has a way of imposing on people, and the arrival of a mysterious young woman (Isa Briones) seeking protection from a team of assassins launches Jean-Luc into one more adventure.

Who’s after her? Why does she think Picard can help? And why does Jean-Luc think she looks familiar when they’ve never met before?

This show being a sequel of sorts, the answers to most of these questions lie in Star Trek’s past, which is literally being excavated in this new series. Not only does Star Trek: Picard – created by Alex Kurtzman, Akiva Goldsman, Michael Chabon and Kirsten Beyer – promise to bring back a number of characters from previous shows, but it builds its narrative out of old parts only the first three episodes were made available for review, but it certainly appears that the trajectory of the series goes somewhere we’ve absolutely gone before.

With all due respect, I would like it to get there faster.

Star Trek: Picard is produced by the same team who gave us the darker, often infernally complicated prequel series Discovery, and while that’s not entirely a negative – the new series shares Discovery’s no-expense-spared production values, looking and sounding terrific while also expanding the Trek roster with a diverse, talented cast that features Alison Pill, Michelle Hurd and Santiago Cabrera – certain deficiencies have been carried over as well.

If you thought Discovery wasted a lot of time, Picard is overwritten in the same way. Peripheral characters spend scene after scene trading exposition that doesn’t seem terribly important, and individual episodes hover in place until the next big revelation can drop.

There’s nothing here that’s as obnoxious as Discovery’s endless Klingon arguments about honour and strategy (which, you may recall, never actually amounted to anything), but three episodes in, Star Trek: Picard already feels like a movie’s worth of plot stretched out over 10 installments it takes two and a quarter hours to get the scattered pieces of its story into place.

It is likely that the people who’ve been waiting for Picard – and Stewart – to return to their TVs won’t be terribly bothered by this, just as Discovery’s viewers were so happy to have a new Star Trek show they didn’t care that it took a season and a half to figure out what it wanted to be. I can’t say I minded terribly either it really is a pleasure to watch Stewart return to this character, easing back into Jean-Luc’s reticence, his thoughtfulness, his wry sense of self.

And while he’s in better shape at 79 than I am at 51, the show doesn’t pretend he’s still a credible action hero. Jean-Luc gets winded during a chase in the first episode, one of several small ways the show confronts the character’s advanced years. I’m curious to see how that develops over the course of the season – though knowing the show has already received a second-season order does rather prevent any serious contemplation of Jean-Luc’s mortality.

Not that we want that, of course. We want the further adventures of the characters we love, and Picard seems determined to deliver that. It’s up to us to ignore the distractions, focus on Stewart’s effortless charisma and still-compelling presence, and hope his new vessel completes its shorter shakedown period faster than Discovery did.