Review: The Harder They Fall is a giddily fun hip-hop and reggae Western 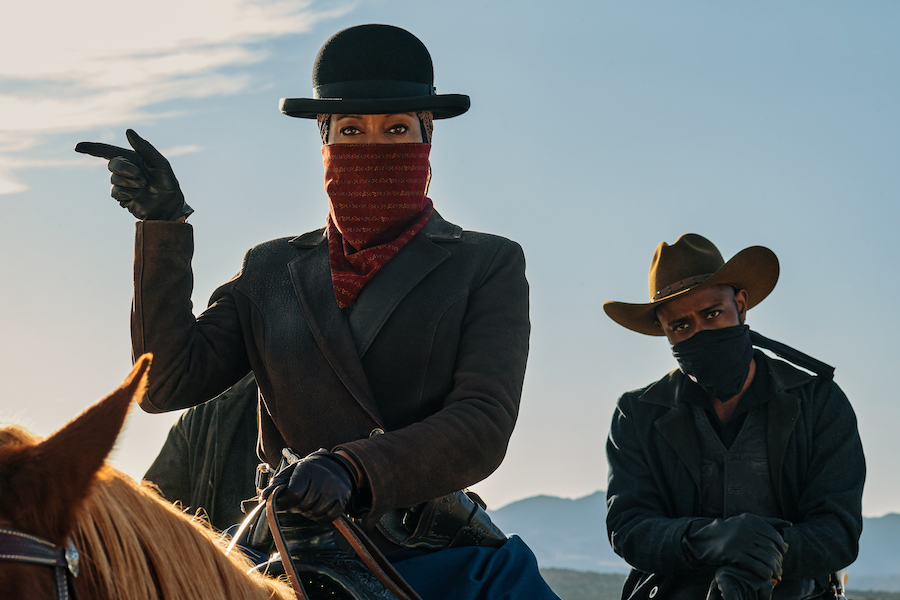 Regina King and LaKeith Stanfield are pure bad-assery in The Harder They Fall.

The six-shooters blast to sounds of hip-hop and reggae in The Harder They Fall, a giddily fun, comical and ultra-violent Western headed for Netflix that will be instantly categorized as revisionist simply for starring a powder-keg Black ensemble cast.

Oscar-winner Regina King is Treacherous Trudy. Atlanta’s LaKeith Stanfield is Cherokee Bill. Idris Elba is Rufus Buck – though if you think about it, Elba could have easily recycled the name of his character from The Wire, Stringer Bell, which is as wild west a moniker as they come. That trio leads the villainous Rufus Buck gang – which, as an opening title card declares, actually existed. Same goes for the movie’s heroes, formerly enslaved cowboys like Nat Love (Jonathan Majors), Jim Beckworth (R.J. Cyler) and Bill Pickett (Edi Gathegi), along with Stagecoach Mary (Zazie Beetz), who used to pack a pistol while delivering for the U.S. postal service, and deputy U.S. marshal Bass Reeves (Delroy Lindo).

History doesn’t tell of these characters engaged in the “blam-blam” revenge tale laid out in The Harder They Fall. Here the 150-year-old icons are remixed into pure badassery, talking modern smack, throwing shade in fashionable throwback threads and staking out microcosms of Black life that – for most of the movie – go undisturbed by white people.

This isn’t the first movie to challenge Black erasure in the Western genre. Mario Van Peebles did it with the 1993 shootout Posse, and before that there was the The Legend Of Black Charley, a 1972 blaxploitation flick, with a far more controversial original title.

But Jeymes Samuel’s Netflix movie has the budget and bravado those movies could only dream of. It goes hard with a great train robbery, breathtaking vistas and dynamite shootouts where the camera feels like it’s part of the action, ducking and weaving between bullets and finding new positions for the best shot. There’s also a playfulness here commonly attributed to Tarantino – think freeze frames, split screens and cheeky title cards – as if Sweet Sweetback’s Baaadasssss Song director Melvin Van Peebles didn’t get there first.

And in the fashion of the OG Van Peebles, Samuels practically makes a musical. The director, who as a musician goes by The Bullitts (he’s also Seal’s brother), collaborated with Jay-Z (a producer on the movie) to curate a soundtrack that brings a Barrington Levy remix and original cuts from Kid Cudi, Lauryn Hill and Jamaican artist Koffee (we better see an Oscar night performance of Koffee’s title song, or we riot).

There are fault lines in the plotting and some of the characters. The Harder They Fall can often feel like a collection of showstopping sequences or gags that are laid out along tracks, whether or not they fit. Character motivations are at times perplexing. A romance between Majors’s Nat Love and Beetz’s Mary Fields has zero chemistry. An emotional story arc doesn’t quite get its due. And not too many characters are afforded more than what brief moments of posturing allow – I desperately need more of Cyler’s loud-mouth and fast-hands gunslinger and Danielle Deadwyler’s bug-eyed, gender neutral saloon bouncer Cuffee.

But The Harder They Fall powers through its flaws with locomotive energy and the excess swagger coming from a cast that can make the most of slick postures. In case it wasn’t obvious from the get-go, Elba brings back that Stringer Bell energy we’ve been missing for two decades. Stanfield is a whispery angel of death as Cherokee Bill. And I could get lost in King’s chilling glare and intentional slow drawl all day. Then there’s Lovecraft Country star Majors doing a damn fine job countering all that energy with his comically empathetic puppy eyes, as if he were ready to fluff a pillow before laying a gunman down to rest.