Review: The Matrix Resurrections is a disappointing digital rehash

Almost two decades after ending their revolutionary sci-fi action trilogy, Lana Wachowski, Keanu Reeves and Carrie-Anne Moss return for a new chapter... but this game is played out 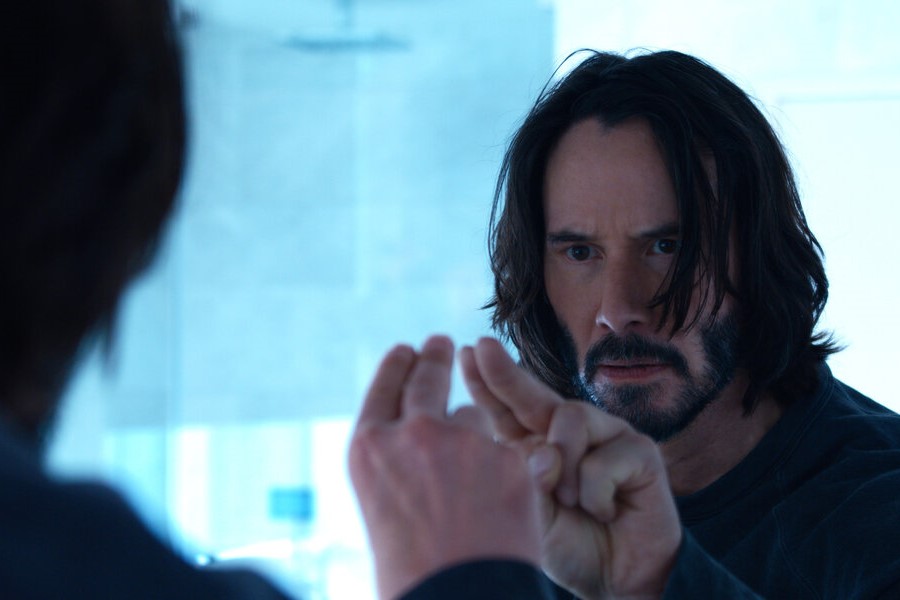 Keanu Reeves questions his reality all over again in The Matrix Resurrections.

There are two types of people: those who experienced the seismic impact The Matrix had when it opened in theatres in March of 1999,  and those who grew up in a culture defined by it. (I suppose there’s a third group – the people who don’t care – but they’re not reading this review, are they?)

For those of us in the first group, it’s difficult to explain that feeling to the second group: that electric sensibility that you were seeing something that was the first of its kind, reliant on decades of existing ideas and images but reassembling them into a single, coherent work of art that people would be trying to rip off for years to come. Star Wars probably landed the same way in 1977; Pulp Fiction definitely did in 1994. But these moments are few and far between.

As you may recall, Lana and Lilly Wachowski’s expansive apocalyptic cyber-thriller cast Keanu Reeves as Thomas Anderson, an unassuming everydude who discovers he’s living in a simulation generated by an artificial intelligence that’s enslaved humanity. (It’s also a narrative in which the protagonist rejects his assigned identity to reinvent himself with a new name and persona, rejecting the expectations of both authority and society itself – a storyline that gained additional context as the Wachowskis did the same for themselves years later.)

With remarkable confidence, the Wachowskis mixed martial-arts action sequences with heady sci-fi concepts, marrying Philip K. Dick’s feverish questioning of reality with the furious grace of Hong Kong wuxia cinema. The first Matrix was lightning in a bottle; the back-to-back sequels, released four years later, ran wild with its ideas and ambitions, expanding them in every possible direction. They proved divisive, but the Wachowskis did exactly what they wanted to do, creating their own version of the Gnostic gospels for Reeves’s Neo, Carrie-Anne Moss’s Trinity and Laurence Fishburne’s Morpheus – and bringing the story to a definitive conclusion.

Well, it’s been 18 years and Warner Bros. would do anything to revive a profitable IP – like, literally anything – so now it’s time for The Matrix Resurrections to bring the series back from the dead, along with two of its characters.

The new film finds Lana Wachowski taking us back down the rabbit hole for a metanarrative that finds Reeves’s Anderson decades older, living in San Francisco and looking an awful lot like John Wick, with the beard and the hair and all. But he’s not an accomplished murderman; that’s just how Keanu Reeves looks these days.

No, Thomas is now revered as the designer of a videogame trilogy called The Matrix, which revolutionized gaming a couple of decades earlier with its reality-bending narrative and radical use of bullet-time. (I told you it was a metanarrative.) Thomas spends his time working on a new project called Binary, and quietly pining for a woman he sees at his local coffee shop (Moss). She’s a mom called Tiffany, but she looks uncannily like the Trinity of his game. And of course Neo, the protagonist of the Matrix game, looks an awful lot like Thomas.

It’s a clever way for Wachowski to investigate the cultural impact of the franchise she co-created back in the day, and the first movement of Resurrections has fun remixing key beats of the original film while acknowledging just how daunting it would be to try to follow it up, as Thomas and his tech-bro boss (Jonathan Groff) have been tasked to do. There’s also the additional complication that Thomas got so immersed in the original trilogy that he suffered a psychotic break; his analyst (Neil Patrick Harris) is concerned that a Matrix 4 might be genuinely dangerous to his hard-earned stability. Of course, the other possibility – that Thomas’s game wasn’t a game at all, but a window into a reality he can no longer access – would be even more dangerous, wouldn’t it?

That’s the jumping-off point of The Matrix Resurrections – or to put it in terms of this specific narrative, the point at which Morpheus shows up with a pill in each hand. The red one sets you free; the blue one lets you stay in the world you know, happy and oblivious as your body is mined for every last iota of energy.

Neo, as you may recall, took the red pill. But The Matrix Resurrections takes the blue one, settling for rehashing the original film rather than reinventing the series.

The reality-bending concept is running on fumes, but Wachowski and her collaborators are content to go through the motions with a few new faces – Groff, Harris, Candyman’s Yahya Abdul-Mateen II as a Morpheus stand-in, Iron Fist’s Jessica Henwick as jacked-in warrior Bugs – and that new coat of self-reflexivity. But the lack of genuine invention is startling; Wachowski’s characters may not know they’ve played this game before, but we do.

It’s disappointing, and then depressing, to realize this Matrix isn’t going to offer anything nearly as groundbreaking as its predecessors, as Wachowski trades the original trilogy’s dizzying ambition and exquisite action set pieces for a frenzy of digitized stunts and repetitive fights and shootouts. Yes, some characters return from the sequels, but the movie doesn’t let them do anything; they’re just there to shout at our heroes and provide brief complications to the larger through-line.

Worse, Resurrections decides it’s necessary to separate Neo and Trinity for most of the story, which deprives us of the connection Reeves and Moss forged in the original trilogy and makes this movie feel even more like a bad copy of the first, which followed Neo’s journey almost exclusively. Why not follow Tiffany through her own story this time? Why not try something genuinely radical, and trust the audience is equipped to follow along? Literally every other Wachowski movie has taken wild conceptual swings – yes, even Speed Racer – so the lack of anything that feels genuinely daring in The Matrix Resurrections is the biggest surprise of all.

It’s not like Reeves and Moss wouldn’t have been up for something challenging. Early in Resurrections, the pair have a quiet conversation in a coffee shop that’s so filled with warmth and unspoken longing that it nearly justifies the whole reboot. But if that’s the best thing I can say about a Matrix movie, something’s definitely glitchy.