Denzel Washington and Frances McDormand star in this black-and-white Shakespeare adaptation, in theatres now and coming to Apple TV+ in January 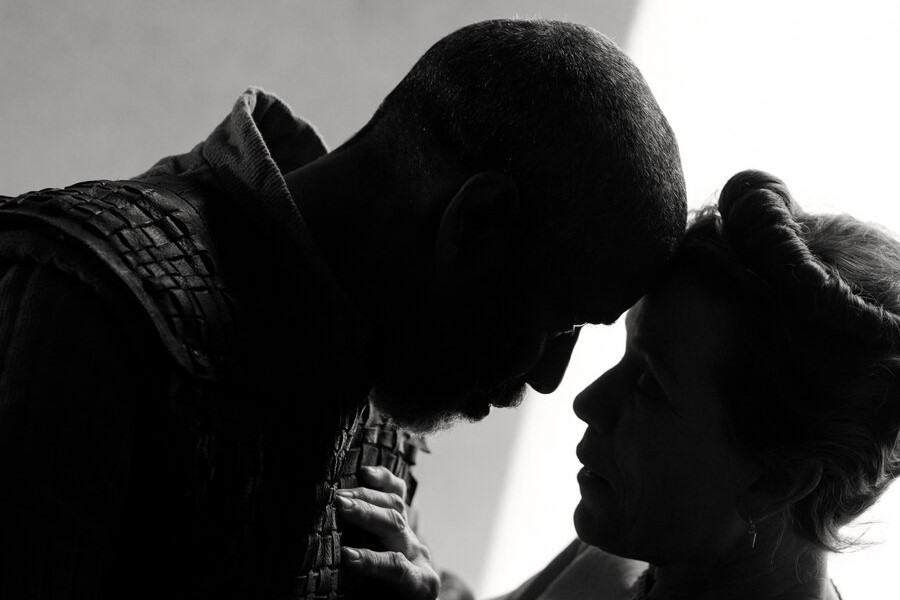 Denzel Washington and Frances McDormand, in silhouette, star in Joel Coen's The Tragedy Of Macbeth.

THE TRAGEDY OF MACBETH (Joel Coen). 106 minutes. In theatres December 25 and available to stream on Apple TV+ January 14, 2022. Rating: NNNN

If you’re not feeling entirely comfortable about going to a movie theatre to see Joel Coen’s The Tragedy Of Macbeth, it’ll be streaming on Apple TV+ in just three weeks’ time. So that’s good news. And it won’t be the first time one of Coen’s films has had a truncated theatrical release; 2018’s The Ballad Of Buster Scruggs was a Netflix picture, after all.

But The Tragedy Of Macbeth is different in another way: it’s Joel Coen’s first solo feature after nearly 40 years working in collaboration with his brother Ethan. As the movie started, I was wondering whether I’d be able to notice if anything was missing – some signature visual element, something in the writing. A few minutes in, I wasn’t thinking about it at all.

Coen’s Macbeth is a stark, splendid Shakespeare adaptation, with tremendously satisfying performances by Denzel Washington and Frances McDormand. (McDormand is Coen’s wife, and a producer of the film.) It’s deeply respectful of the text while also offering a new interpretation, somewhere between theatre and cinema. Like much of Coen’s earlier work, it feels like we’re watching a reinvigoration of an existing genre – but the thing being revisited here isn’t so much a genre as a way of making movies.

Bruno Delbonnel’s sumptuous black-and-white photography references early cinema like Dreyer’s The Passion Of Joan Of Arc, where the camera doesn’t try to hide the staginess but turns it into an aesthetic element. The whole film was shot on a soundstage, relying mostly on practical filmmaking tricks to open it up. I can’t remember the last time I saw a matte painting used as a background, but Coen and Delbonnel deploy them here, effectively and with the appropriate reverence.

Coen’s adaptation runs briskly through the play, honouring both the text and the pleasure in letting us watch his actors speak it in screen-filling close-ups, their performances as vividly captured as the textures of their wardrobe. His fondness for eccentric casting gives us Kathryn Hunter’s remarkable turn as all three of the weird sisters and Alex Hassell, late of Cowboy Bebop, as the cagey Ross, while the decision to cast leads who are decades older than their characters proves a curious strength. Their haste to murder Duncan and take his throne now reads as a last, desperate grasp at power.

The age gap also lends further dimension to Washington’s charm in Macbeth’s early scenes. The hearty Thane Of Cawdor was just the mask of a man who’s spent his whole life putting people at ease, waiting for the right moment to reveal himself. And McDormand similarly rips into Lady Macbeth with the zeal of someone who’s always wondered how she’d handle the role. Turns out she’s a natural.