Review: Toy Story 4 has an existential crisis… and it’s entertaining

After nearly a quarter century, Pixar's flagship franchise cleverly ponders whether its movies are for children or for the adults who've grown up watching them 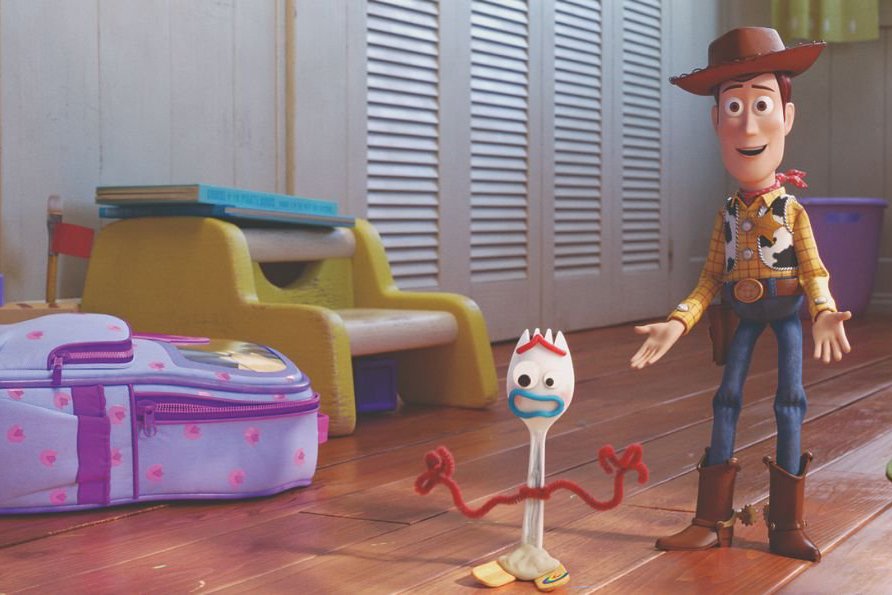 We need to talk about Forky.

Forky, the patchwork plaything at the centre of Toy Story 4, is unique among the self-aware characters of Pixar’s flagship franchise. He knows he’s not a toy: he’s a plastic spork, designed to be used once and then thrown in the trash. Recycling is not something sporks understand, which is further evidence that Forky is not a toy toys are passed from one owner to another, as we saw at the end of the last movie.

But a little girl gave him a face, and arms and feet, and now he’s alive. And he doesn’t want to be.

Sure, Buzz Lightyear had a brief freak-out in the first Toy Story all the way back in 1995, when he found out he was a toy rather than an actual space ranger. A quarter-century later, Toy Story 4 inverts the premise: Forky, voiced with a quivering wail by Arrested Development’s Tony Hale, knows all too well that he’s a toy, and would rather be dead.

This brings us to the larger metaphor of the new movie, which finds the Toy Story franchise pondering its identity, and its purpose, after all these years: are these movies made  for children or for the adults who’ve grown up alongside them?

Hell, is Pixar even Pixar anymore, after its integration into Disney and the subsequent departure – under very unpleasant circumstances – of founder and prime mover John Lasseter? It’s a genuine existential crisis, and the film finds all sorts of ways to literalize it.

Forky aside, there’s Woody – voiced, as always, by Tom Hanks – who’s grappling with his diminished status in new owner Bonnie’s toy box. He’s no longer the favourite, and he’s still pining over Bo Peep (Annie Potts), whose absence in the last movie is finally explained in this one’s prologue.

Forky’s arrival gives Woody a new mission: to explain the rules of their existence, as he did with Buzz, and also to keep the new guy from casting himself into every garbage can he sees. And when a road trip with Bonnie and her family leads to Forky throwing himself out of a moving RV, Woody goes out in pursuit. He’s dutiful that way.

It’s not a spoiler to say that Bo Peep returns, and that we’re introduced to a chatty doll named Gabby Gabby (Christina Hendricks), carnival-prize stuffed animals Bunny (Jordan Peele) and Ducky (Keegan-Michael Key), tiny cop Giggle McDimples (Ally Maki) and Quebecois Evel Knievel knockoff Duke Caboom (Keanu Reeves, of course). And yeah, sure, it’s an excuse to fill the Disney store with more toys, but at least they’re all rendered as distinct personalities – and even allowed to surprise us.

My biggest problem with Toy Story 3 was the way it simply repeated the plot of Toy Story 2, with Ned Beatty’s Lotso Huggins standing in for Kelsey Grammer’s turncoat Prospector. Toy Story 4 recalls the original Toy Story in its construction, but it’s not as slavish this one is out to subvert any expectations we might have about where things are headed and how this will all end.

Making his feature debut, Josh Cooley (who co-wrote Inside Out and directed a couple of Pixar shorts) handles the mixture of character gags, elaborate visual action and devastating emotional epiphanies more gracefully than Lee Unkrich did in the last go-round there’s nothing as horrific as that film’s incinerator sequence, though Gabby’s army of ventriloquist-doll henchmen has the potential to creep out adult viewers more than kids.

And this is the first movie of the series to really engage with the uncanny aspects of the premise: Forky’s death wish opens up a whole crate of questions about the inner lives of these characters, and Woody’s new situation offers a chance to explore his own inner life, and exactly what his pathological dedication to his owners – who inevitably leave him behind – has accomplished over the years.

Kids of a certain age might wonder why their parents are tearing up at the resolution to that one, and maybe that’s the answer to the franchise’s question of its purpose: it can be two things.

The Toy Story movies exist to delight children and rip out the hearts of adults, offering bittersweet endings to some characters while letting others get increasingly bizarre. Whatever else it’s doing, that’s not what you’d expect from a billion-dollar franchise bent on its own self-perpetuation. I’m kind of loving that.