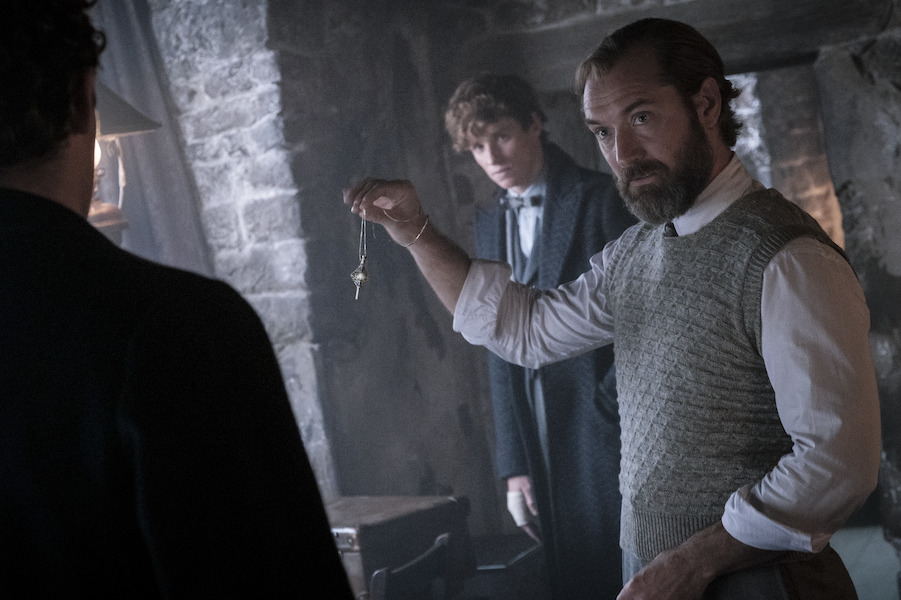 Fantastic Beasts: The Secrets Of Dumbledore

Fantastic Beasts: The Secrets Of Dumbledore is just trying to get it over with. There were supposed to be five of these movies but this third instalment ends on a note of half-hearted closure, as if everyone will be just as satisfied to quietly sweep it all under the magic carpet.

You can’t blame them. The prequel cycle to the Harry Potter franchise has been more memorable for the embarrassing drama behind the scenes than anything put up on screen.

Johnny Depp, who played the villain Grindelwald in the first two Fantastic Beasts movies, has been the subject of abuse allegations, and since replaced by Mads Mikkelsen. Ezra Miller, who plays volatile magical force Credence Barebone, has been grabbing headlines with his own erratic and violent public outbursts. And Potter author J.K. Rowling’s TERF views has given audiences and perhaps even cast members more reason to put some distance between themselves and this franchise. Katherine Waterston, a lead when Fantastic Beasts began but also a vocal critic of Rowling’s TERF comments, has essentially been written out, appearing only briefly in the movie to tie up loose ends.

The movies themselves have all been laboured, convoluted and mostly charmless, led by Eddie Redmayne’s cloying magizoologist, a wizard who shelters mystical creatures. His name is Newt Scamander, which is something I have to be consistently reminded of on every return trip to Fanastic Beasts. Very little about these movies stick.

He’s here to help Harry Potter’s future mentor Dumbledore (Jude Law) stop the latter’s former lover-turned-nemesis Grindelwald from winning a wizarding election that he’s manipulated with dark magic. Grindelwald is a stand-in for Hitler; these movies were meant to coincide with the Holocaust and conclude with a standoff in 1945. But Fantastic Beasts ended up living in the shadow of the Trump-era.

The original cast was here in Toronto for the Fantastic Beasts Canadian premiere the night Trump was elected. His influence naturally ended up in the two sequels. Grindelwald’s election platform is based on his hatred towards muggles (non-wizards), an allegory to Trump’s appeal among xenophobes that might have felt more relevant had this movie been released two years ago. It has since collected some dust.

I would suggest that the pandemic-related delays have taken the wind out of this franchise’s sails, but Fantastic Beasts never had that kind of momentum going for it anyways. It has always been exhausting and cold. Even the much-hyped romance between Dumbledore and Grindelwald, the rare openly gay relationship in a movie calculated to be a global blockbuster, is too chaste to inspire any feeling. It was inconsequential enough that the filmmakers were able to trim it out for homophobic censors in China.

The Secrets Of Dumbledore fares better than previous Fantastic Beasts movies because its simpler, a feature stemming from a lack of concern towards setting up future instalments. Instead, the movie finds that surprising off-ramp, bidding farewell for now, or perhaps forever, which in itself inspires such an overwhelming sense of relief and elation. That’s the most emotion these movies have ever conjured up. 143 minutes. Opens in theatres Friday (April 15). NN (Radheyan Simonpillai)

Sarah Gadon and Alison Pill star in All My Puny Sorrows.

All My Puny Sorrows

Director McGowan (One Week, Still Mine) can’t quite find the right tone for his handsome but bloodless adaptation of Miriam Toews’s acclaimed, semi-autobiographical novel. Struggling Toronto novelist Yoli (Alison Pill) returns to her home town outside Winnipeg after her glamorous concert pianist sister Elf (Sarah Gadon) has survived another suicide attempt and is moved to the hospital psych ward. The siblings are familiar with mental illness; their father (Donal Logue) killed himself when they were children, and their mother (Mare Winningham) and her sister (Mimi Kuzyk) remain stoic. It’s suggested that the family’s troubles come from their patriarchal Mennonite background – the elders chastised the family about Elf’s musical aspirations. But this remains vague.

The film’s at its best when showing the darkly funny rapport between the two sisters, suggesting the pain they’re avoiding. And it is frank and unsentimental in its look at depression and suicide. But the dialogue, filled with literary allusions to everyone from Aleksandr Solzhenitsyn and Thomas Aquinas to D.H. Lawrence and Samuel Taylor Coleridge (who provided the book with its title), comes off as precious and reverential. 103 minutes. Opens in theatres Friday (April 15). NN (Glenn Sumi)

French filmmaker Audiard (A Prophet, Dheepan) takes an unlikely break from genre movies to grapple with modern sex and real estate; feeling out the connection between millennials’ most urgent, emotional and occasionally elusive pursuits.

The whole thing begins with Émilie (Lucie Zhang, a wonderful new discovery) posting an ad for a roommate to help her afford living in a Paris apartment on her own and landing a fuck buddy at the same time. The roommate with benefits is Camille (Makita Samba), a doctoral candidate turned real estate agent, who later works up a romance with colleague Nora (Noémie Merlant of Portrait Of A Lady On Fire fame). The latter is a law school student harbouring intense sexual hangups. Nora also happens to get confused with a cam girl doppelgänger who ends up being her online BFF, a contrivance that tips the movie towards Paul Haggis territory.

Audiard makes this a cool fling of a movie that doesn’t really work but is fun while it lasts. He doesn’t really have a grasp of the material, which is an adaptation of Adrian Tomine’s graphic novel Killing And Dying, that has passed through the hands of Léa Mysius (Ava) and Céline Sciamma (Portrait Of A Lady On Fire). They’re credited as co-writers.

The too-many-cooks scenario is maybe why the film feels confused about what it’s saying when it comes to modern relationships. There’s tension here between finding instant gratification when swiping right and working through the digital noise towards something more permanent and rewarding. That take feels too prudish and analog for this movie, which also finds its best scenes indulging in casual sex and its liberating joys. 105 minutes. Opens in theatres Friday (April 15). NNN (RS)