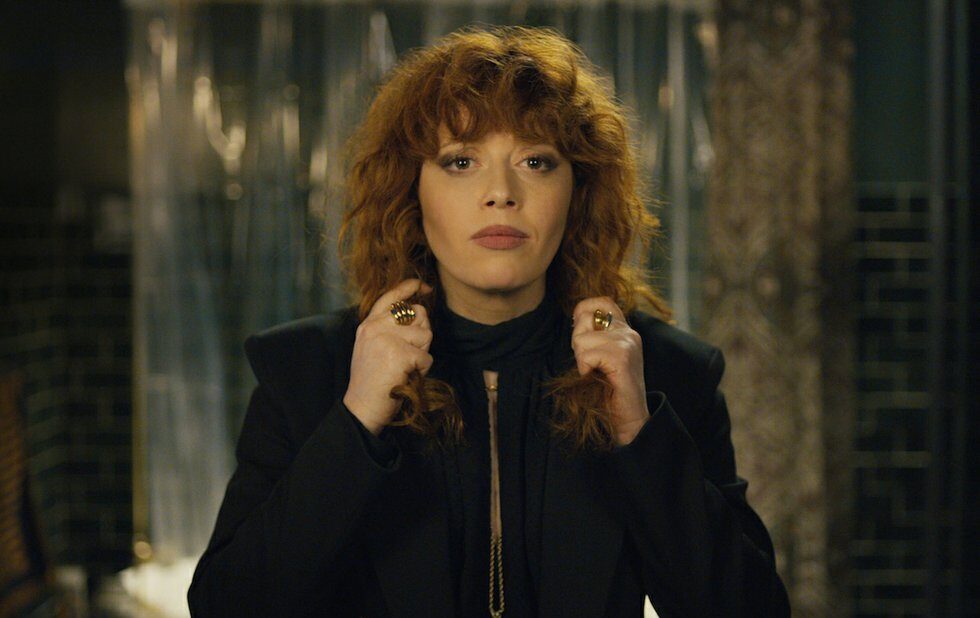 If you’ve watched the trailer for Russian Doll, you might assume the dramedy series is about mortality. You’d be half right.

The show stars Natasha Lyonne as Nadia, a chain-smoking, hard-partying New Yawker who can’t stop dying in very New Yorkian ways: she is mowed down by a yellow cab and plunges into an open cellar grate. Caught in a Groundhog Dayesque loop, she is continually transported back to her 36th birthday party, forced to relive the debauchery over and over.

But from episode one, this series – created by Lyonne, writer/director Leslye Headland and producer Amy Poehler – is equally concerned with morality.

Lyonne, who also served as co-writer and directed one episode, plays an outsized composite of both her real-life and screen personae. A raspy-voiced curmudgeon with an dense mane of curly red hair, Nadia is commitment-averse, lives alone with a cat, spits acerbic one-liners and does so many drugs she gets called “a cock-a-roach.”

The series opens with Nadia staring in a mirror at her birthday party thrown in her artsy friend Maxine’s (Greta Lee) East Village converted loft, which used to be an old Jewish school. Maxine passes her a coco puff, and after making quick rounds, Nadia ditches her own party to sleep with Mike (Jeremy Bobb), a self-satisfied player type. As a single woman nearing 40, Nadia knows how she is perceived and her confidence provides fuel for sharp and hilarious verbal sparring.

“I get it,” she tells Mike as he surveys her apartment. “I’m single and I choose to foster a pet so it must be a pathetic attempt to fill the hole in my soul that would otherwise be filled by what? A penis?”

That remark becomes more than rhetorical when, that same night, she is run over by a cab, only to find herself back at the party. Soon she is dying over and over again.

Eventually Nadia finds a kinship in Alan (Charlie Barnett), who is her opposite. He is also caught in a loop, and provides a comic and dramatic foil, but also sets up Russian Doll’s broader existential question: If this bad thing is also happening to a straight-laced conformist, is there such a thing as universal morality?

As the title suggests, Russian Doll uncovers the layers behind its characters’ facades, turning the supernatural conceit into a kind of therapy that allows Nadia and Alan to do over interactions with lovers and friends. Nadia reconsiders her indifference during her relationship with her ex, Peter (Yul Vazquez), while Alan confronts an impasse with his long-term girlfriend Beatrice (Dascha Polanco).

Despite a strong cast, this is very much the Natasha Lyonne show. She isn’t the most nuanced dramatic actor, but she is a brilliant comic talent with arch timing and the script plays to her strengths. She has irresistible presence, matched only by the effortless gravitas of Broadway legend Elizabeth Ashley, who plays Nadia’s therapist, Ruth. The dialogue is crackingly quippy and funny, full of one-liners that reference old men in the punchlines. (“This is like The Game! I’m Michael Douglas!” Nadia exclaims, in a huge wink to cinephiles in the audience.)

Such jokes contribute to the impression of Nadia as an old soul from another era of New York, and a largely nocturnal, neon-lit aesthetic reinforces a timeless quality, though the current economic anxiety is broadly referenced in gentrification jokes and the homeless character, Horse (Brendan Sexton III). Nadia is presumably able to afford to live alone in the East Village in 2019 because she is a software developer for a video game company, though we see her at work in only one or two scenes.

Each episode is a half hour or less, paced briskly enough to keep you hooked and packed with twists, digressions, red herrings, slapstick comedy and increasingly ridiculous and horrific death scenes. But where the show truly excels is in allowing its characters to be complex and contradictory. The best part about the time warp is that everyone, even unsympathetic male characters like Mike, are given room to be multi-dimensional.

Most interestingly, Russian Doll walks a fine line between not judging Nadia’s behaviour (or anyone else’s) while hitting familiar comic beats and seeming to lock into a rom-com-like redemption narrative.

As such, the show’s appeal gradually becomes less about the supernatural goings on and more about how Lyonne, Poehler and Headland will subvert the well-worn narrative path Nadia looks to be headed down. (To get more specific would take us into spoiler territory.) The show’s creators refuse to judge Nadia, but it is clear she needs a change. This tension is reinforced loud and clear when she lectures Alan on “moral relativism.”

Though long despised by American social conservatives (even as Trump-supporting Evangelicals selectively ignore all kinds of un-Christian behaviour), the term remains a part of political discourse. And in Russian Doll moral relativism equals empathy. But today we see our leaders evoking a twisted version to justify decimating the environment and economic policies that push people into poverty. In this context, the show’s retro aesthetic can feel overly nostalgic and romanticized. Obviously this is a fantasy, but you can’t help but feel Russian Doll is conveniently sidestepping harder questions by treating the economy as little more than subtext.

On the other hand, Russian Doll’s call for empathy cleverly forces viewers to mirror Nadia’s journey by checking their own perceptions and assumptions each step of the way.

In episode one, Nadia also tells Mike she’s considered she might die alone. “My move is gonna be to wait until I’m in my late 60s and then seal the deal,” she says sarcastically. It’s a tacit acknowledgement that love relationships are financial arrangements. But that is a layer Russian Doll ultimately leaves up to the audience to uncover.