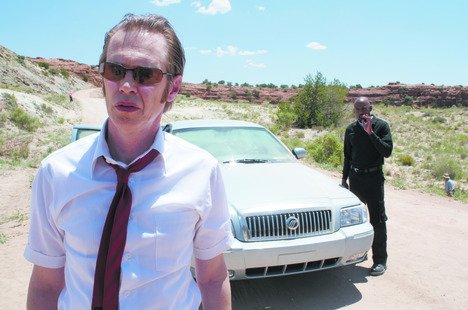 Steve Buscemi doesn’t get a lot of starring roles, so I don’t blame him for signing on to Saint John Of Las Vegas. A present-day retelling of Dante’s Inferno in the context of New Mexico insurance fraud probably sounded cool at the pitch meeting.[rssbreak]

But the movie that resulted, written and directed by Hue Rhodes, is awful from beginning to end. Buscemi’s world-weary compulsive gambler – apprenticed to swinging-dick investigator Romany Malco – trudges through a series of ambiguous encounters with a string of indie faces. Hey, everyone, we got Sarah Silverman! Look, Peter Dinklage is a surly boss! Danny “Machete” Trejo runs a car shop! Emmanuelle Chriqui from Entourage does a lap dance in a wheelchair!

In a bid to keep us interested, Rhodes employs a pointless framing device to let us know things will not go well. They love that stuff at Sundance, right?