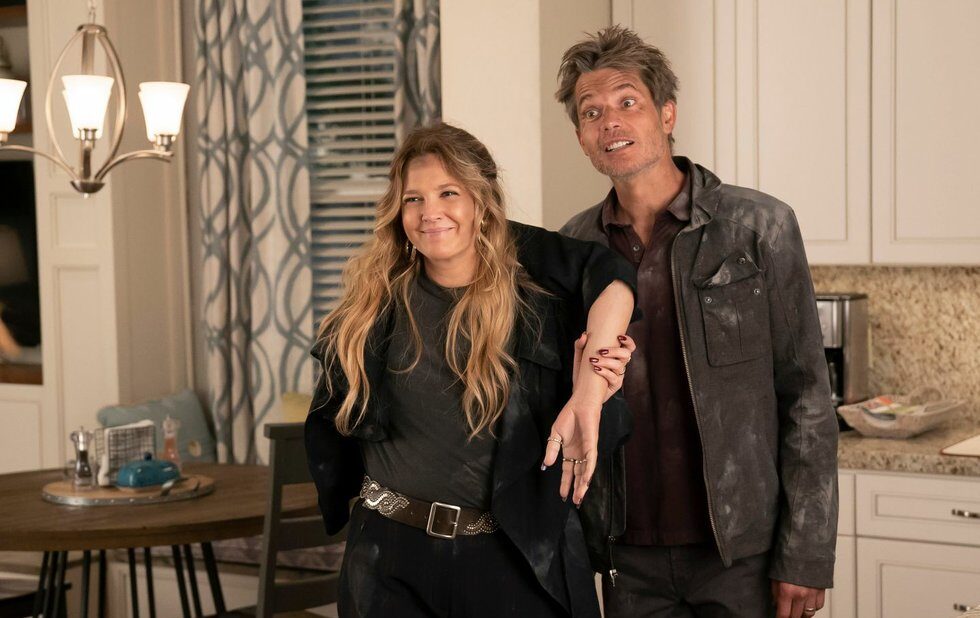 In its first season, Santa Clarita Diet established itself as a gruesome domestic comedy in which California realtors Sheila and Joel Hammond played by Drew Barrymore and Timothy Olyphant, in a pairing for the ages do their best to lead normal lives despite her new compulsion to eat human flesh. You know, normal midlife concerns.

Having set the very specific tone, creator Victor Fresco set about fine-tuning his absurdist universe in season two, with Joel and Sheila trying to figure out the hows and whys of her condition and keep it from happening to anyone else.

And on March 29, the shows third season drops on Netflix, further expanding the world in which the Hammonds have found themselves, talking zombie heads and all.

I wouldnt want it any other way.

The third season picks up the morning after the events of the second-season finale, in which the Hammonds acquired a disciple (Natalie Morales) who thinks Sheila is a literal Christian miracle after their activist daughter Abby (Liv Hewson) and her nervous neighbour Eric (Skyler Gisondo) blew up a fracking installation in the desert. Look, its a long story, go catch up.

Bottom line: the Hammonds are still trying to make the best of their increasingly untenable situation. Sure, there are more Nazis available for Sheila to eat than ever before, but now theres a Serbian zombie-hunter (Goran Visnjic) on their trail. Oh, and that twitchy guy (Happy Endings Zachary Knighton) who was snooping around in season two? Whats his deal?

Fresco also introduces an entirely reasonable question. If Sheilas condition means shes never going to die, wouldnt she want her beloved Joel by her side? That conundrum and its potential downside, as embodied by the disembodied head of frenemy Gary (Alan Tudyk, replacing his Firefly comrade Nathan Fillion) gives this season a new complexity, and allows Olyphant to add another layer of depth to whats turned out to be the role of his career.

Barrymores a delight too, constantly finding variations on Sheilas perpetual enthusiasm. And while Im pretty sure the shows predominant whiteness is intended as commentary, its encouraging to see Fresco introducing more characters of colour into Santa Claritas world.

And yes, the shows still funny as hell, though at least one of its new subplots in which Abby and Eric awkwardly pretend to be a couple in order to throw off suspicion about that whole bombed a fracking plant, committed several felonies thing feels a little stale.

Again, I think Fresco is doing it to comment on the trope, but it still means we have to watch the show go through the motions of a 70s sitcom: innuendo-laden conversations, wacky misunderstandings, cringeworthy public displays of affection, and so on all to further tease the possibility of Abby and Eric getting together for real, which is something the show seems far more invested in than Abby herself. (Thats getting uncomfortable, because Hewson has created a character who knows her own mind and knows she doesnt have feelings for Eric.)

Still, a little clumsiness isnt enough to fully derail the show, which snaps right back to itself whenever Barrymore and Olyphant are onscreen. Whether theyre casually bemoaning the fact that Joel can no longer keep his aliases straight, fighting with their rivals (Joel McHale, Maggie Lawson) at a salad bar or supporting each other while drenched in blood (almost always someone elses), its one of the great ongoing double acts, and it never stops paying off.

Id be happy for the Hammonds to run around killing people forever, so I guess Im with Sheila on the whole immortality thing. How about that.