Review: Scary Stories To Tell In The Dark is a creepy gateway ghost tale 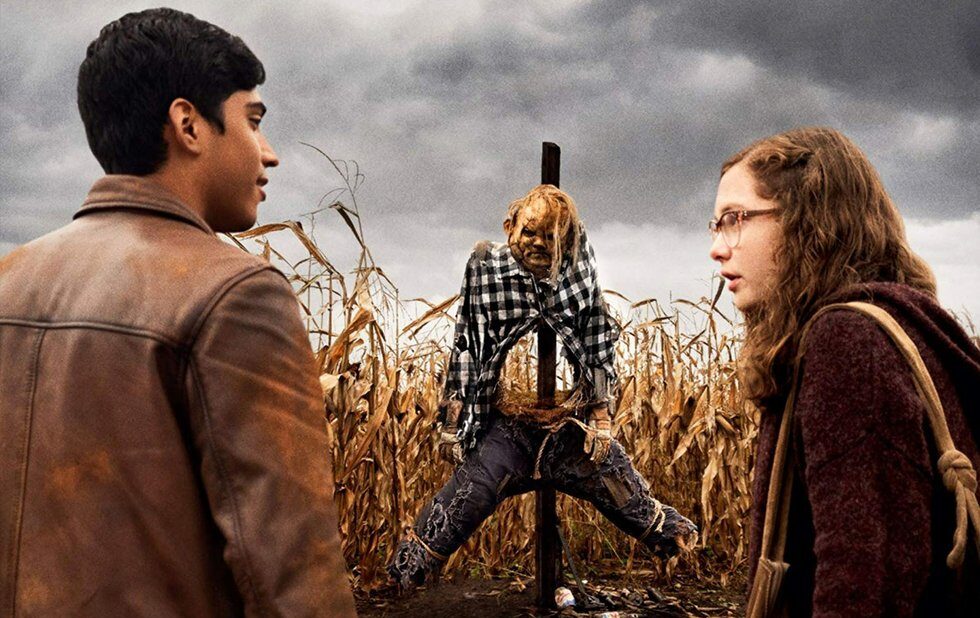 Foreground: Michael Garza, Zoe Margaret Colletti. Background: creepy-ass scarecrow which probably isn't going to rear up and pull their faces off or anything.

I was a little too old for the Scary Stories To Tell In The Dark books, but I understand their appeal: Alvin Schwartz’s books of bite-sized horror stories for children were a good introduction to dread and the uncanny for young readers who could sense the Goosebumps books weren’t quite delivering the goods.

André Øvredal’s movie works the same way, reconfiguring Schwartz’s concept into an appealingly creepy ghost story for young-ish viewers taking their first tentative steps into grown-up horror. It feels like a PG-13 riff on A Nightmare On Elm Street without the sadism or sexual component, and honestly, that’s not a bad thing.

Set in 1968, the film follows three small-town pals (Zoe Colletti, Gabriel Rush, Austin Zajur) and their new friend (Michael Garza) who hide out from Halloween bullies in a haunted house and wind up cursed to live out bespoke nightmares written for them by an angry spirit.

And so, in the grand tradition of urban legends, folk tales and grainy old movies, our heroes (and a couple of other teens who just happened to be around) are tormented by the haunts they’ve carried in their heads since childhood, now given grotty flesh and malevolent intent: a scarecrow with a disturbingly lifelike face, a mysterious pot of stew with a secret ingredient, a spider bite that gets nastier and nastier, a pale woman who warns children they’re in an evil place while getting just a little closer every time they see her, a dismembered corpse that insists upon remembering itself. Icky stuff. Scary stuff.

The individual curses let the movie nod to the books’ anthology structure while still building a master narrative that lets Øvredal (Trollhunter, The Autopsy Of Jane Doe) and his screenwriters – including producer Guillermo del Toro – play with some teen-sleuthing tropes while also fleshing out the town’s history and orchestrating some appropriately intense set pieces.

For his part, del Toro makes sure the texture of the film is up to his usual standards – that drive-in image of Night Of The Living Dead has just the right scuzziness, and there’s a moment involving microfiche that’s shot almost lovingly – while also baking some interesting social and political commentary into the heartland setting. (The action takes place in the days leading up to Richard Nixon’s election, and Garza’s Latino character is unquestionably an outsider in white-bread Mill Valley.)

The movie’s a little on the long side, and most of the secondary characters are just sketches, but when it focuses on the spookhouse stuff – or when Colletti and Garza get a chance to develop their awkward, gentle chemistry – it’s pretty satisfying.

And when you’re not bracing for the next scare, keep an eye out for local talent: Kim’s Convenience’s Rodrigo Fernandez-Stoll pops up at that drive-in, and Stephanie Belding and David Tompa work at the local psychiatric hospital.