TV review: Nola Darling is still elusive in Shes Gotta Have It season 2

SHE'S GOTTA HAVE IT: SEASON 2 (Spike Lee). All nine episodes streaming on Friday (May 24) on Netflix. Rating: NNNearly. 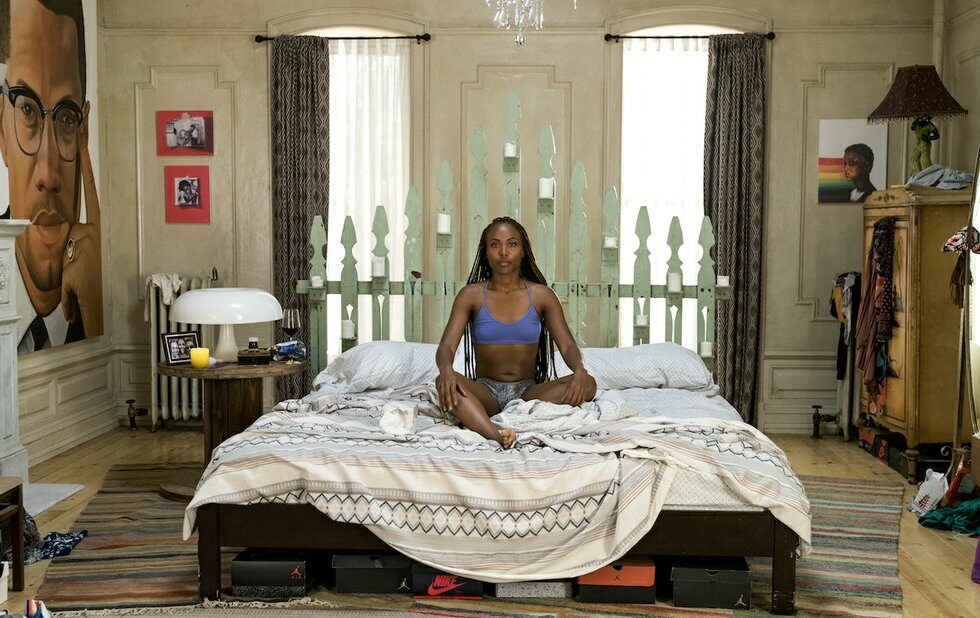 SHE’S GOTTA HAVE IT: SEASON 2 (Spike Lee). All nine episodes streaming on Friday (May 24) on Netflix. Rating: NN

Nearly 30 years after Spike Lee introduced Nola Darling in his feature-length debut, the self-proclaimed sex-positive, polyamorous and pansexual characters mere presence on screen is still a really big deal. Although diversity in film and TV has come a long way since Shes Gotta Have It was released in 1986, there is still a long way to go, especially for narratives told through a Black, queer, sex-positive lens.

When Lee retold Nolas story for a Netflix series in 2017, the first season was met with mixed reviews. The musical numbers were weird, the characters were underdeveloped and the new Nola (DeWanda Wise) came off as an outdated take on the “carefree Black girl” as seen through the lens of a middle-aged man.

Now, fresh off of his first Oscar win, Lee is bringing Nola and her ragtag group of lovers back for a second season, but the result is less than stellar. Like last season, Lee directed all episodes and executive produced with his wife Tonya Lewis-Lee. He also tapped his sister Joie Lee, who starred in the original film, and brother Cinque Lee as writers.

Through monologues and impromptu musical numbers, Lee uses characters as avatars to voice his opinions on things like colonization in Puerto Rico and gentrification in New York, and to echo his admiration for Prince. But after nine episodes, it is still unclear what we are supposed to take away from Nolas story. Her art career is growing and thriving but her most valued relationships, namely her friendships with Clorinda (Margot Bingham) and Shemekka (Chyna Layne), are often in flux.

True to form, Lee continues to infuse elements of surrealist theatrics into Nolas world, just like he did last season with the exploding butt and the magical headwrap.

At the start of season two, we meet Nola 18 months after the events of season one, when she ditched her three boyfriends in a way that was very on-brand for a “Spike Lee joint.” Remember? They did a choreographed dance to Prince, fell asleep together and faded from her life one-by-one like Avengers after the Thanos snap. Then, in the seasons final moments, Nola reunited with love interest Opal Gilstrap (Ilfenesh Hadera).

Season two opens midsummer with the couple in full bliss. So blissful, in fact, that they actually refer to themselves as NoPal. Like last season, Wises chemistry with Hadera makes their scenes together a highlight. In a show that is often over-the-top theatrical, their relationship is the most believable. Its easy to see why they work, but its also easy to see why they wont.

By episode three, the show is expanding the focus beyond Nola. All three of her former flings, Jamie Overstreet (Torontos Lyriq Bent), Greer Child (Cleo Anthony) and Mars Blackmon (Anthony Ramos), are back. But it would have been better if they werent.

Last season they were two-dimensional caricatures: the straight-edge business man, the self-absorbed artsy dude and the Brooklyn fuckboy, respectively. Now, following their lives without the common thread of Nola feels incongruent. Moreover, there is little character development for Jamie and Greer beyond the archetypes that they are supposed to represent to Nola. With the relationships long over, its unclear how they fit into the story.

We follow Jamies ex-wife Sheryl (Sydney Morton) as she pursues a new relationship, causing Jamie to lose his mind (in a scene aptly soundtracked with Shaggys It Wasnt Me). But it’s as if he has moved on from a caricature of the straight-edge business man to the bitter ex-husband. Given the role his relationship with Nola played in the dissolution of his marriage, his anger and shock read as possessiveness, making him even harder to like.

The carefree Mars comes of age this season in a story thread that works because he has to rely on Nola in order to do so. We also see Nolas mom Septima (played by Lees sister Joie Lee) reviving her acting career and Divine, formerly Papo (Elvis Nolasco), repairing his relationship with his daughter and starting a community garden. These subplots add colour to Nolas world but they dont help tell Nolas story. And without a more thorough understanding of her character, its hard to stay invested in whats going on in her periphery.

Its ironic that the trailer asked, “Who is Nola Darling?” because this season did nothing to answer that question. Yes, Black women can lead full, multifaceted lives separate from their relationships. But by the end of this season, its unclear who she is, what she wants, and what the audience should want for her.

Many of Nolas actions seem contradictory. She ended last season chiding her lovers for wanting to possess her but falls into the same pattern with Opal immediately after. Early in the second season, when Nola asks Opal what she sees when she looks into her eyes, Opal says, “me,” which Nola seems to like. With that being said, Wise’s performance is enchanting, and Lee’s gives her many prolonged close-ups that are deeply expressive and endearing, suggesting many complexities behind this character that can be hard to understand.

She also spent a significant portion of season one struggling financially, but scoffs at a lucrative corporate opportunity in season two, confusing her therapist, who she paid in IOUs and barters last season. The focus on Nolas community would have been more welcome this season if there had been a stronger foundation for Nolas character established last season.

Still, its impossible to overlook how beautifully each episode is shot. And longtime fans of Lees work will enjoy his self-referential callbacks to films like Crooklyn and Do the Right Thing. This season was so distinctly a “Spike Lee joint” that fans of the filmmaker might be able to overlook the underdeveloped characters and stylistic tropes.

Ultimately, the season evolves into a very meta look at art and criticism. In regards to critics, one character says fuck a they,’ this is my expression. This can be interpreted as Lees way of saying that regardless of what we think, he is going to tell the story that he wants to tell, no matter how hard it is to follow.