Shes Out Of My League 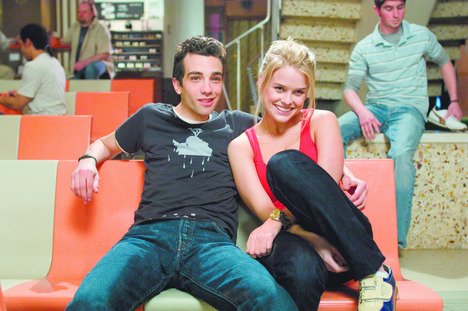 With its loser-snags-hottie plot and its gleeful embrace of cussing and sexual humiliation, She’s Out Of My League feels like a movie commissioned at the crest of the Judd Apatow wave.[rssbreak]

Turns out that it was the film was shot in the spring of 2008, with Knocked Up freshly available on DVD.

Somehow, though, the movie works on its own terms, playing out a slightly more realistic variation on the loser-snags-hottie dynamic without the complication of pregnancy. These two stay together because they want to, not because family values are at stake.

Apatow bit player Jay Baruchel – star of such middling Canadian fare as Fetching Cody, Real Time and The Trotsky, and best known to American audiences for his turn as Ben Stiller and Robert Downey Jr.’s cranky co-star in Tropic Thunder – plays a Pittsburgh slacker who lands smokin’ event planner Alice Eve (Crossing Over) after he finds her lost iPhone at an airport.

She appreciates his kindness, but it’s not an act of charity she just likes him. And like any minor-leaguer suddenly offered the chance to go to the show, he’s terrified he’ll choke in the clinch.

That’s where Sean Anders and John Morris’s script subtly deviates from the Apatow mould, giving its stars the space to build believable characters with credible emotional issues – and keeping us rooting for them as they’re forced through the requisite third-act complication and climactic airport chase.

Bonus points to the casting director for snagging the invaluable Krysten Ritter as Eve’s sidekick and reuniting Cloverfield casualties Mike Vogel and T.J. Miller as two of the hero’s buddies, but points off for whatever Lindsay Sloane is doing as Baruchel’s gimlet-eyed ex. Her cartoonishness may satisfy some studio requirement that the film provide a broad comic villainess, but it ends up grating on the audience as well as the characters.