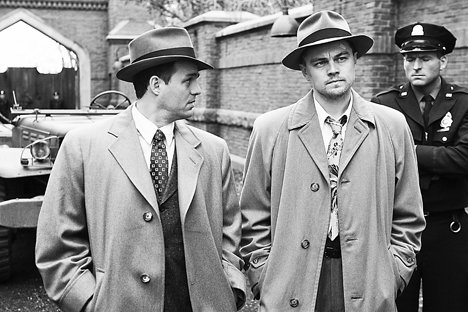 Leonardo DiCaprio (right) and Mark Ruffalo will make you... shudder.

Shutter Island is to The Departed as Cape Fear was to Goodfellas – a chance for Martin Scorsese to kick back with a simple genre exercise after an ambitious large-scale project.[rssbreak]

But he’s Martin Scorsese, so he can’t help but overdo it. What starts out as a straight-up adaptation of Dennis Lehane’s period thriller mutates into an overwrought mashup of Oliver Stone, David Lynch, half a dozen Italian splatter movies and one of the Silent Hill video games. I can’t remember the last time I saw blood so bright, or whites so vividly over-saturated – oh, wait, it was Lynch’s Mulholland Drive.

The premise is pure pulp simplicity. Leonardo DiCaprio’s troubled investigator arrives at an isolated asylum circa 1954 to look for a missing inmate, only to become ensnared in the institution’s ambient madness. But from the first frames, it’s clear that something else is up – DiCaprio’s a sweaty, nervous mess, tormented by vivid flashbacks to the liberation of Dachau and the death of his wife (Michelle Williams) after the war.

As the movie plows forward, shuffling DiCaprio and sidekick Mark Ruffalo through a series of encounters with the facility’s inmates and staff, Scorsese doesn’t miss a single flourish, turning Shutter Island’s sound design and editorial structure into essential storytelling elements.

The director delights in his unfettered access to character actors, finding room for Ted Levine, Jackie Earle Haley, Emily Mortimer, Elias Koteas, John Carroll Lynch and Patricia Clarkson, among others, and key roles for Ben Kingsley and Max Von Sydow as sinister psychologists. Everyone is perfectly on point, the better to support DiCaprio’s increasingly unhinged hero.

There’s just one problem: Scorsese’s trying to make a contemporary version of the moody thrillers of his boyhood – films by the likes of Val Lewton and Jacques Tourneur, who used suggestion and symbolism to convey twisted emotional struggles. But those movies were a lot simpler and a lot shorter, and he’s grown used to long, convoluted narratives.

At two and a quarter hours, Shutter Island strolls when it should sprint. You can admire its construction, but always from the outside you’re never locked inside it the way it wants you to be.