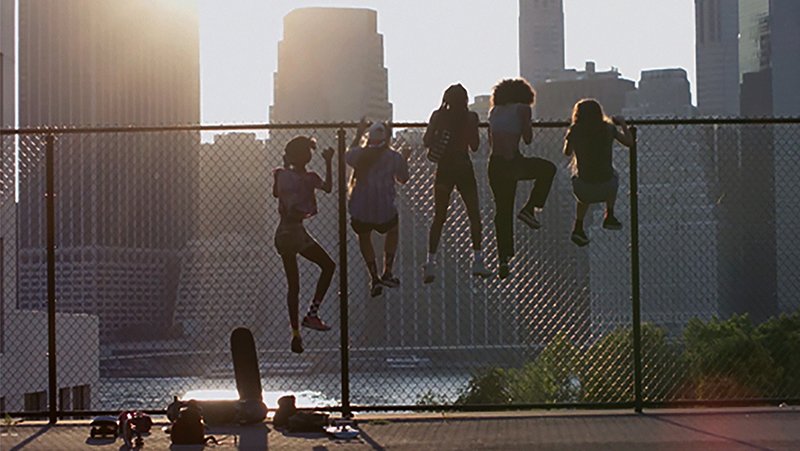 Skate Kitchen, which takes its name from the crew of young women who ride skateboards around New York City’s Lower East Side, could have been a familiar coming-of-age drama about an 18-year-old Long Islander (Rachelle Vinberg) who escapes her suffocating home life when she starts hanging out with a clique of shredders in Manhattan.

But in the hands of director/co-writer Crystal Moselle – the Wolfpack documentarian who built this fictional feature around a real NYC skate crew – it’s something much more. It’s a sociological study of teenage life at this specific moment.

Vinberg’s Camille and her friends live in a world of easy acceptance, casual hookups, low-level peer pressure and constant situational awareness, captured without judgment by Moselle and cinematographer Shabier Kirchner.

We’re always aware of risks when they’re being taken – a puff of a laced joint in a skate park, a charged altercation with security guards near Times Square, a hazy groping session that maybe goes a little farther than Camille is comfortable with – but we also understand that these kids (and they still are kids) aren’t suckers. They have each other’s backs.

There’s not much drama and even less tension to Skate Kitchen, but that’s just fine the movie glides along with the characters as they drift through their days. Camille falls out with her overprotective mother (Elizabeth Rodriguez), is drawn to a boy (Jaden Smith) who has some history with housemate Janay (Ardelia Lovelace), and starts to figure out who she is.

That’s all that happens on paper, but of course there’s a whole universe to it. Moselle’s non-professional stars are naturals – Vinberg has Brie Larson’s radiance when she smiles, and fellow skater Nina Moran has the ability to pull focus in a scene simply by raising her eyebrows – and she knows how to catch them in moments that feel utterly real.

They may be gliding through life, but they’re doing it with style.