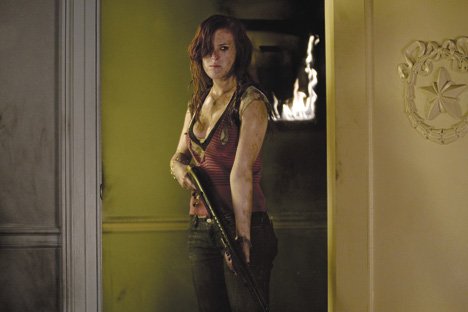 You don’t see many slasher flicks with a half-decent story. This one rises far enough above the usual gibberish to make it worth watching between the scary bits and smart humour.

A sorority prank goes wrong. Someone dies and the girls cover it up, led by high-status sociopath Jessica (Leah Pipes) who plays the group solidarity card, and opposed by Cassidy (Briana Evigan), the voice of common sense. As things work out, either of them could be the killer, who pops up eight months later and starts picking off the conspirators at their graduation bash.

Pipes provides most of the humour with a string of bitchy one-liners, but the whole cast is having fun, and Margo Harshman, as Chugs, stands out for her deadpan dirty talk, a much-needed element given the shortage of sleazy sex and cute girls in trashy underwear – key artistic virtues when one sets a killer among the co-eds.

Director Stewart Hendler’s slick moving camera keeps the pace quick and the mood edgy, even in the big party scenes, and his off-kilter timing makes the shock moments unpredictable.