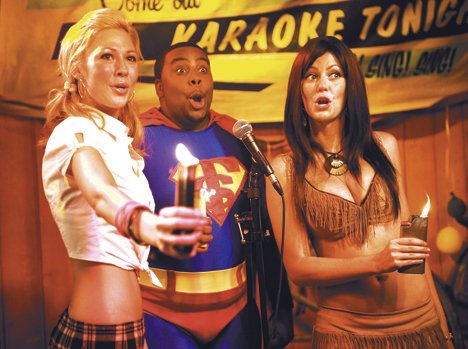 Director/actor Dany Boon (left) and Kad Merad are stuck in the Sticks.

After watching Stan Helsing, I have to wonder whether I’ve been too hard on Jason Friedberg and Aaron Seltzer. This atrocious excuse for a horror spoof makes their slavish, cheap-?ass parodies look like high-?minded cultural commentaries.

Meet The Spartans may be nothing more than an empty string of pop-culture shout-outs, but at least they’re organized into a story.

Stan Helsing is just an unending mess of druggie gags, dick jokes and bouncing boobs played out against a backdrop of half-?assed horror-?movie references, as the eponymous stoner (Steve Howey) and his friends encounter knock-?off versions of Freddy, Jason and Chucky over one long Halloween night.

Will they survive? What will be left of them? Really, who cares? By the time the Barack Obama impersonator shows up at a karaoke contest – hosted by Leslie Nielsen in drag – you’ll want everyone dead.