TV review: Star Trek: Discovery is still having a bumpy ride in season 2

After introducing new characters and new mysteries, the sci-fi series risks stalling out with a pivot back to its worst storylines 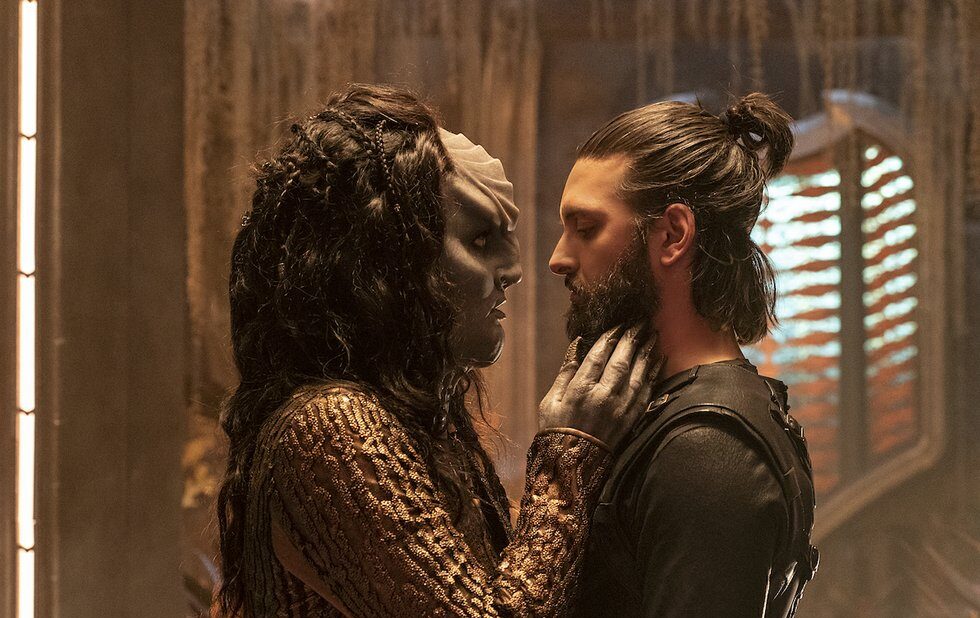 Dammit, things were going so well.

Star Trek: Discovery returned to the air last month with two very strong episodes that introduced new characters, new mysteries, a new sense of adventure – and, most importantly, the feeling that the show was jettisoning the worst of its baggage from a very bumpy first season.

After starting and ending a war with the Klingon Empire, losing one parental figure (Michelle Yeoh) and being betrayed by another (Jason Isaacs) – oh, and falling in love with a damaged security chief (Shazad Latif) who turned out to be a secret Klingon – conflicted specialist Michael Burnham (Sonequa Martin-Green) was finally in a good place. But then the USS Enterprise turned up! Cliffhanger!

Anyway, everything’s fine. The ship was damaged by a radiation burst or something, requiring repairs, but that just meant its captain, the confident but caring Christopher Pike (Anson Mount), gets to borrow Discovery for an investigation of some mysterious space lights way out in the galaxy – space lights which are somehow connected to a Vulcan named Spock, who of course just happens to be Pike’s science officer and Burnham’s foster brother. The stage was set for a season-long voyage that could centre on exploration and adventure, and curiosity and innovation, with a diverse assemblage of characters working together to figure out the universe. You might remember that mission statement, over 50-some years of the franchise: to explore strange new worlds, to seek out new life and new civilizations, to boldy go where no one has gone before.

So of course episode three took us back to the goddamn Klingons.

Look, I know there’s a slice of Trek fandom that loves the Klingons. They love the formality, the snarling, the makeup, the hair, and all the political complexity that was introduced to the fairly generic warrior race over the course of The Next Generation, Deep Space Nine and even Voyager. But they never worked on Discovery, which treated them as a clan out of Game Of Thrones with rivalries and intrigue that required entire episodes to set up and play out – and which somehow never, ever had any bearing on the show’s master story.

Structurally, the Klingon War was an elaborate bait-and-switch to distract viewers from the first season’s pivot to the Mirror Universe in its back half, which was also kind of dopey in the rear-view. If the first season was defined by anything, it was a crushing seriousness, and a weird overconfidence in its own storytelling. It’s no coincidence that the single best episode of that season – with space scoundrel Harry Mudd (Rainn Wilson) trapping the Discovery in a time loop, and the crew slowly figuring out how to break it – was totally separated from the master plot. It was inventive and fun it felt like Star Trek.

The first two episodes of Discovery’s second season also felt like Star Trek. Stuff happened, and quickly. There was a high-speed jaunt through an asteroid field in the first episode, a race to save some accidental colonists from a lethal meteor shower in the second. Tig Notaro arrived as an engineer-turned-doctor – a nice reversal on McCoy’s constant complaints – and Pike and Burnham took a few minutes to debate the ethics of the Prime Directive, which made it feel like a proper Star Trek show after all. The Discovery bridge crew even got names!

But last night’s episode put all that aside, pausing the mystery of the signals for long scenes of Klingons arguing with each other about succession and loyalty on their homeworld, and Latif’s mopey hybrid Ash Tyler – now looking like a dead ringer for Jason Mantzoukas circa The Dictator – shocked out of his PSTD by the revelation that emperor L’Rell (Mary Chieffo) bore his love child during the hiatus. At least they’re speaking a little faster now, and even slipping into English so the actors can give more naturalistic line readings.

I’m aware this season started off in the hands of returning showrunners Gretchen J. Berg and Aaron Harberts, who were subsequently fired by CBS and replaced during production by co-creator Alex Kurtzman, so I dearly hope this was just a way of someone tying up all the stuff from season one – and setting a few pieces in place for Yeoh’s Section 31 spinoff series – in order for the show to move forward.

Because there’s still potential here. Discovery’s demonstrated both a willingness to experiment with the Star Trek franchise, and a genuine love of the property. The four Short Trek vignettes released last fall (and still available on Crave) were engaging, intelligent peeks into the corners of the show’s universe – and, perhaps not coincidentally, the most entertaining one revolved around a Harry Mudd caper. The writers have ideas. Let them explore.

And here’s another wild notion: let the actors act. The weirdest thing about watching Discovery is regularly seeing actors who are more interesting than the characters they’re playing. Burnham’s composure feels like a straitjacket for the expressive Martin-Green, and her crewmates are clearly capable of delivering more than is being asked of them.

The season two premiere had a great moment of shared panic between Oyin Oladejo’s Owosekun and Emily Coutts’s Detmer during an emergency it was a throwaway laugh, but it also gave us more information about their characters than we’d received in the entirety of the first season. Also, anyone who’s seen Ronnie Rowe Jr. in Black Cop – or in his recurring role on Kim’s Convenience – knows he’s got a range much wider than he’s been allowed to show as communications officer Bryce.

But it’s not just the writers and actors. There’s potential available everywhere on the set of Discovery, it just has to be encouraged.

There’s a shot, late in the season two premiere, of the Enterprise off in space, seen through a porthole while characters discuss the absent Spock on Discovery. The ship just hangs there, looking like a balsa-wood model – just as it sometimes looked in the original series.

It might have been a trick of the lighting and the cinematography, or a conscious decision by the effects team, or maybe it really was a balsa-wood model that certainly would have been the cheapest solution. But it also served as a warm, lovely little acknowledgement that Star Trek used to look like this, and nobody minded all that much: it’s always been a show about the characters and the adventure, and it was heartening to see Discovery remember that, even in passing.

Look, I stuck through the first season and I’m here for the second. I want this show to figure itself out, and not just because I want to see as many local actors get a chance to drop by as possible. I want Discovery to be a show worthy of the franchise, sure, but more than that, I’d love it if it were worthy of my time.