NOW MagazineMovies & TVReviewsStar Trek: Discovery is back, and it’s still phasering itself in the foot

Star Trek: Discovery is back, and it’s still phasering itself in the foot

The third season of the Star Trek prequel leaps to the future, and brings all its baggage along 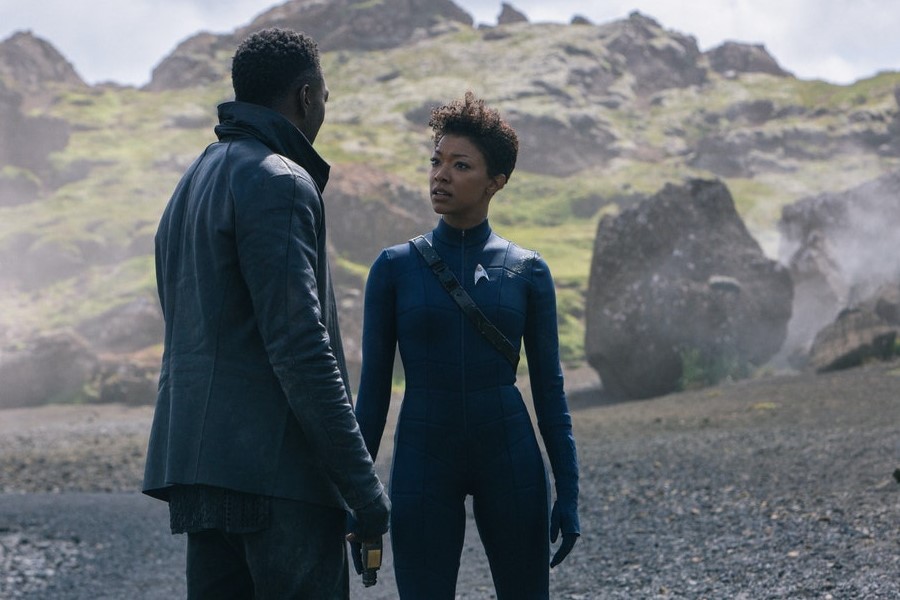 Star Trek: Discovery is back and it’s as frustrating as ever.

After a second-season cliffhanger that found our heroes making a one-way trip 930 years into the future to save the present, the former prequel to the original 60s show now has a chance to stand on its own, with Michael Burnham (Sonequa Martin-Green) and her intrepid crew finally able to chart their own course without having to worry about continuity.

It’s a great way to reset the narrative board and leave behind a lot of the characters and plotlines that never clicked over the previous seasons, including the squabbling Klingon houses, which also gave us the wet blanket of Shazad Latif’s Ash Tyler. Then there’s Starfleet’s scheming dark-ops unit Section 31 – which Tyler joined in the second season and somehow made even less interesting.

But within the first couple of episodes, it becomes clear that the show hasn’t been able to abandon its central flaws. After 29 episodes, Discovery still doesn’t know what kind of show it is, or what it wants to be. And honestly? It really should have figured that out by now.

The jump to the future means Discovery has to abandon the pre-Kirk Enterprise, meaning no more snappy space fun with Anson Mount’s Captain Pike. But they’ve kept a few other characters from the second season, including Tig Notaro’s crabby engineer Jett Reno, and now there’s an entire universe of characters we can meet, including two-fisted star voyager Book (David Ajala), introduced in the third-season opener as the rule-breaking Han Solo to Michael’s straight-arrow Luke Skywalker.

I know, I know, Star Trek isn’t Star Wars, but… well, now it kind of is. Because the future finds Starfleet and the Federation not nearly as prominent in the galaxy as they used to be, relegated to the realm of myth after some awful event the Discovery skipped over. And now it looks like the master plot of this season will revolve around Michael, her crew and their new friends rebuilding the Federation one planet at a time.

It’s idealistic in the way Star Trek used to be, and seems to bring this show’s identity more in line with another Trek prequel, Enterprise – only with much more money and a considerably advanced approach to technology. (Everything is basically magic now.) And that could be interesting in the long run, even though the episodes available for preview seem to see “rebuilding Starfleet” as an excuse for lots of speeches about how important Starfleet is rather than any actual examples of that importance – and there’s a larger question about whether a return to the structures of the past is necessarily the best way to repair a flawed present.

I’d like to believe Star Trek: Discovery intends to interrogate that position, which seems awfully conservative for a show bent on expanding the horizons of its franchise, but I have my doubts. Especially because the show continues to hobble itself by placing Martin-Green’s Michael Burnham at the centre of its universe, and the character remains a near-total dud.

I want to point out that the flaws with Michael aren’t Martin-Green’s fault at all; as the season premiere demonstrates with a scene in which Michael is forced to abandon her self-seriousness for five glorious minutes, the actor is more than capable of doing surprising, lively things within the constraints of a Star Trek show. But the show doesn’t want that from Michael; she’s too often forced to carry the weight of all creation on her shoulders, only occasionally pausing for a tearful reunion with someone from her past, and that gives Martin-Green a very, very narrow range in which to work.

The initial concept of Michael – a human child raised by Vulcans to value logic and detachment above everything else, and whose unearned confidence in her own judgment was her greatest flaw – was intriguing and ripe with potential, and I’m sure if creator Bryan Fuller (Pushing Daisies, Hannibal) had been allowed to actually make the show he conceived he would have known what to do with her. But without Fuller, Discovery has refused to explore Michael’s complications, just treating her as a straight-up hero and forcing all the other characters defer to her. Which works if she’s a captain – which I suspect was her original arc – but that’s not how it’s played out so far.

So who’s in command of the Discovery? Currently it’s Doug Jones’s Commander Saru, the formerly cowardly Kelpian who got his mojo back in season 2 and now seems like a pretty good leader. That’s a course correction Discovery badly needed, as is its attempts to expand the roles of the bridge crew beyond “faces we kind of recognize.” The show is making Trek history by adding trans and non-binary characters, though neither of them is around at the season’s start. But Emily Coutts’s Lt. Detmer gets a little more to do in episode 2, and hopefully the rest of the ensemble will be unpacked as the year goes on.

I say “hopefully” because Star Trek: Discovery has a way of bungling every moment of potential. I’ve spent two years waiting for the show to finally deliver on its promise, and while there’s too much talent on board for this to qualify as a show I watch for work rather than entertainment, it feels like we’re getting closer and closer to that point… especially since the animated Lower Decks series got past its growing pains to became the show it clearly wanted to be over the course of one season of half-hour episodes.

If you’ve got a Crave subscription, the whole of Lower Decks is available to binge in the course of an afternoon, where its character beats and points of Trek reference flow together with surprising elegance. And I admit it, I did not see that coming. So maybe Discovery can get it together in the same way. That’d be nice.