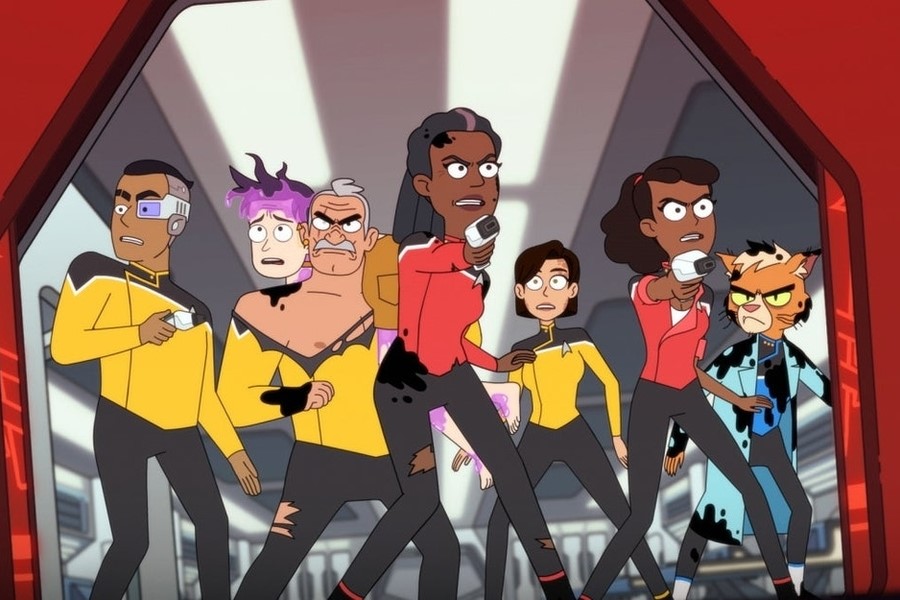 The crew of the USS Cerritos, on a busier day than most.

Star Trek: Lower Decks is the first animated series since the one in 1973 that reunited the cast of the original 60s show (except for Walter Koenig’s Chekhov) for a season of additional adventures on the final frontier. People remember it fondly. That’s nice.

I’m not sure how well Lower Decks will be regarded half a century from now. I’ve only seen the first four episodes, and it’s trying awfully hard to be the wacky, frantic kid sibling to The Next Generation, existing in the same timeline as that show (and Deep Space Nine and Voyager) but in a far sillier mode of operation. It’s fine, I guess. It’s definitely made by people who love Star Trek, and performed by actors who are having a lot of fun. But the fun doesn’t always extend to the audience.

The half-hour series, created by Rick And Morty veteran Mike McMahan, focuses on a quartet of ensigns aboard the U.S.S. Cerritos, “one of Starfleet’s least important ships.” They goof off, they flirt with and/or irritate each other and occasionally get caught up in whatever big adventure the senior staff is undertaking that week.

Beckett Mariner (voiced by Tawny Newsome, who was one of the only consistently good things about Netflix’s dreadful Space Force) is the show’s central character and its wild card, a hypercompetent young ensign who’s served all over Starfleet but keeps getting busted down to the bottom ranks. The Cerritos, captained by the no-nonsense Carol Freeman (Dawnn Lewis), is her last chance to straighten up and fly right. But it’s not going terribly well: Mariner knows all the rules, but she’s just not that interested in following them.

Mariner’s default defiance does not mesh well with her new crewmate, Brad Boimler (Jack Quaid), who thinks rules are great and ought to have more subsections. And so Mariner sets out to corrupt Boimler, which lets Quaid do that same sputtering, confused thing he does in live-action on Amazon’s The Boys if not much else.

Also: There’s a cyborg! Ensign Rutherford (Eugene Cordero, of Other Space and The Good Place) has a cybernetic eye and a Vulcan-designed brain implant that – at least in the first episode – keeps interfering with his emotions. Which is awkward, because the other new ensign, Tendi (Noël Wells), is clearly into him.

Over the first four episodes, these four will find themselves on the periphery of various diplomatic missions and interplanetary incidents, along with the occasional rage-virus outbreak; security officers will be head-butted, martials will be courted, underpants will be lost to drooling slug monsters. The character design is a little generic – McMahan seems to have been aiming for the midpoint between Family Guy and Final Space – but it works.

Most of the time, though, Lower Decks tries a little too hard. McMahan’s strategy is to put the funny front and centre, pitching the show at double-speed so the jokes keep coming. Which would be fine if he also factored in some time for them to land, but instead people are constantly shouting instructions at each other or yelping in pain or howling in delight.

It works during the rage-virus stuff, sure, but that makes the rest of the episode look more desperate: Jeez, just let the characters talk! Wasn’t The Next Generation defined by the soothing hum of the ship’s engines and the civil discourse of a crew that actually liked each other?

But every time I was ready to check out, the show found a way to reconnect itself to the franchise – like the B-story that finds Rutherford working his way through the various departments trying to figure out if he wants a career outside of Engineering, or the alien-gladiator episode that finds Mariner and the ship’s Kirk-wannabe Commander Jack Ransom (Jerry O’Connell) bonding over their competitive natures. In those moments, Lower Decks catches the vibe of Star Trek at its best, visiting strange new worlds and making fun of them. And I kept on going.

Like Mariner, Lower Decks is bursting with potential, but can’t quite figure out where to direct it. I hope it gets the chance to figure itself out.