Street Fighter: The Legend Of Chun-Li 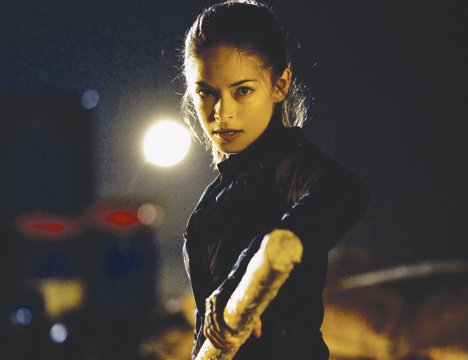 Street Fighter: The Legend Of Chun-Li is no Mortal Kombat.

At least that paragon of video game movies had the sense to keep its story simple, focus on its fights and make each one more spectacular than the last.

Chun-Li, by contrast, drags out the story and treats its fights as short, soft interruptions whose sole purpose is to show us some signature moves from the game. Things move so slowly that Chun-Li (Smallville’s Kristin Kreuk) doesn’t have her first significant battle with the baddies until 50 minutes in.

We begin with Chun-Li as a little girl watching the baddies kidnap her beloved daddy. This gives us the movie’s best fight and only fun performance – Neal McDonough as happily sadistic criminal overlord Bison. Then there’s a long stretch where adult Chun-Li, on the advice of an ancient scroll never explained or referred to again, abandons her concert pianist career to hunt for a mysterious man named Gen on the visually fascinating streets of Bangkok. He trains her and spouts pseudo-philosophical gibberish.

It’s all set-up and could have been handled in 20 minutes. To relieve the tedium, director Andrzej Bartkowiak cuts away to more set-up. Bison consolidates his criminal empire and elsewhere, Interpol agent Charlie Nash (Chris Klein, who seems to think he’s in a light comedy) hooks up with local detective Maya (Mood Bloodgood) for a string of pointless, momentum-killing dialogue scenes.

Even by the low standards of video game movies, Chun-Li offers some breathtaking stupidity. My favourite occurs in a needless flashback to Bison’s childhood when the voiceover tells us that he was left to die while the image shows us an apparently healthy child in a pristine hospital with a nursing sister nearby.

The action, when we get to it, features mediocre wirework, obvious stunt doubles, far too much implausible bullet-dodging and an approach to staging, camera and cutting that only rarely gives us a clear look at what’s happening.