NOW MagazineMovies & TVReviewsReview: Sword Of Trust is a bittersweet comedy with solid laughs

Review: Sword Of Trust is a bittersweet comedy with solid laughs 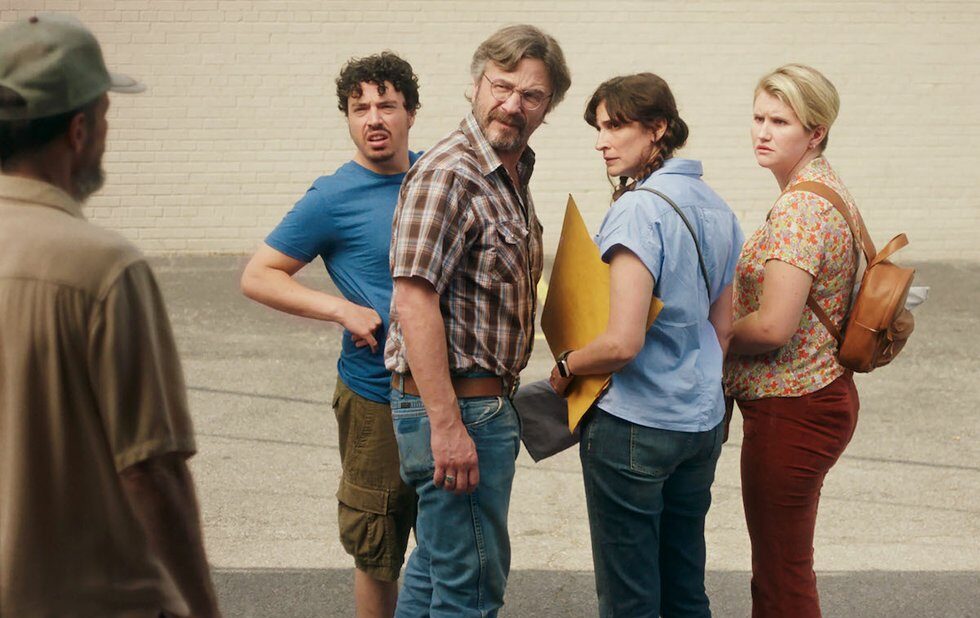 After a few years working in episodic television and scripted dramas, Lynn Shelton is back in her happy place with her new feature Sword Of Trust: mining bittersweet character comedy from insecurity and confusion. It’s like she’s never been away.

Sword Of Trust marks a return to the signature style Shelton established in her breakout features Humpday and Your Sister’s Sister – seriocomic, heavily improvised, open to digressions and revelations from actors who appear to be figuring out their characters right in front of us. When it all clicks, it’s thrilling. And even when things don’t snap together perfectly, there’s enough going on in a given scene to keep us invested in seeing what happens in the next one.

This one works straight through. A shaggy-dog story about four people brought together by a Union sword that appears to prove the South won the Civil War, it’s a slow-motion farce built around a powerhouse performance I just did not see coming.

That’s no disrespect to Marc Maron, by the way he’s been consistently entertaining on GLOW as Sam Sylvia, the washed-up horror director turned wrestling impresario, and he’s burnished his character-actor bona fides in a number of other projects. I’ve just never seen him do what he does here clearly Shelton, who’s directed a few episodes of GLOW, saw something in him that no one else did, and found a way to bring it out.

Maron plays Mel, a cranky Birmingham pawn-shop owner who finds himself brokering the sale of the eponymous épée for a nervous couple (Jillian Bell, Michaela Watkins). See, the sword is special: it’s the sort of thing people call a “prover item,” physical proof of the North’s surrender long suppressed by the Deep State. It’s not a term Mel has ever heard before, but then he’s never hung out with Confederate War truthers it’s all new territory for him. And there are people who will pay a lot of money for an old sword, if they think this particular sword validates their worldview.

And as Mel, his eminently gullible sidekick (Jon Bass) and their new friends wander haplessly down the rabbit hole of alternate histories and low-information voters, their discoveries – and a long ride in a windowless van – lead our dyspeptic hero to confront his own history, and the things he might have done differently. And that’s when his defensive façade falls away, and we see the person who’s been hiding behind it. It’s revelatory in every sense of the word.

As a riff on the current societal trend of cherry-picking facts to suit one’s personal beliefs, Sword Of Trust probably could have dug a little deeper, but Shelton is more interested in individual psychology than group studies, and by the end of her movie we understand very well what makes her characters tick, not just Mel.

Bell and Watkins are sharp and funny, Bass is endearingly slack-jawed as Mel’s dopey factotum, and Dan Bakkedahl, Toby Huss and Shelton herself turn in vivid cameos. But the movie belongs to Maron, who it turns out is not just a gifted actor but a pretty decent guitar player, too. You’re going to want to check it out.