Linda Hamilton and Arnold Schwarzenegger are back, but the best reason to see this familiar sequel is newcomer Mackenzie Davis 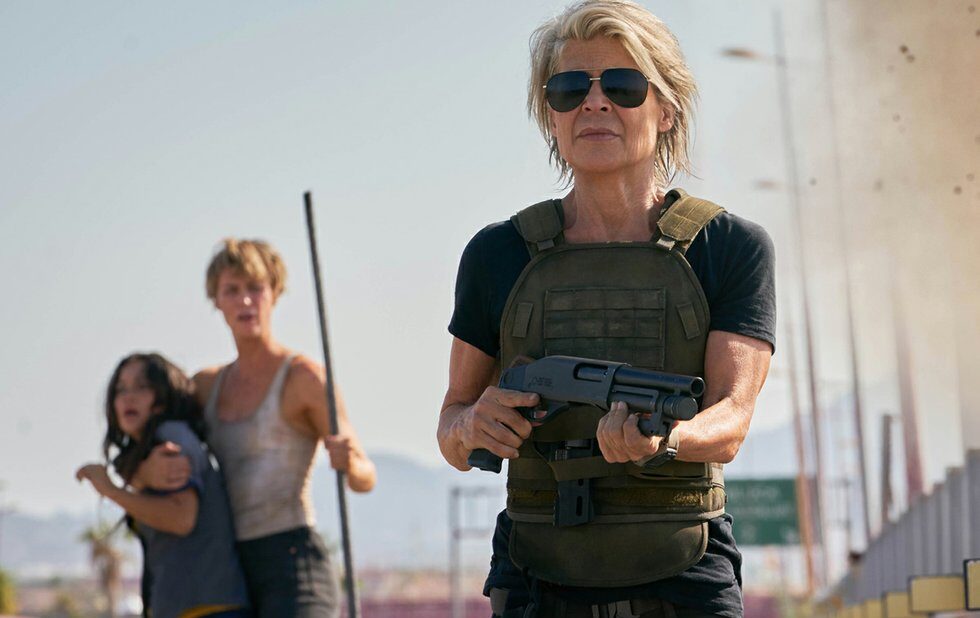 Terminator: Dark Fate is the Jurassic World of Terminator movies: a much-later sequel that uses the passage of time as an excuse to restage the franchise’s greatest hits and reset the table for a new generation.

Did you like the nigh-unstoppable robot assassins, nail-biting chases and improvised battle tactics James Cameron gave us in 1984 and 1991, shot through with a ticking clock to human annihilation? They’re all here, and so – for the first time since Cameron’s Terminator 2: Judgment Day – is Linda Hamilton as Sarah Connor, no longer protecting her son John from killer cyborgs but still obsessed with preventing the end of the world. (She has her reasons.)

After a prologue set in 1998, Dark Fate picks up the action in Mexico City, 2020, where – as always – a murderbot (Gabriel Luna) arrives from the post-apocalypse future to target an unwitting civilian (Natalia Reyes) who will someday give birth to the human resistance. And, since future history inevitably repeats itself, said resistance sends its own agent (Mackenzie Davis) to protect her, and the chase is on.

It’s a rather familiar chase, since Dark Fate is very careful to reference elements, images and even dialogue from Cameron’s original double feature – often to a fault. Cameron is present as a producer and developed the story with four other writers, but actual director Tim Miller (Deadpool) doesn’t have his visual elegance or his gift for using urgency to sell hokey dialogue, so the tone always feels a bit off, and the characters are a little thin on the ground.

Luna’s Rev-9, for example, has nothing on Robert Patrick’s T-1000 for ingenuity or personality, though it’s not the actor’s fault the character barely exists, it’s just going through its programmed motions, and its most interesting aspect is ultimately just a nifty effects gag. Hamilton’s performance as Sarah is similarly hampered, effectively repeating her T2 arc and learning to trust a Schwarzenegger-model cyborg all over again. (Oh, right: that guy’s back too, though he’s less engaged than he was in 2015’s now-erased Genisys.)

Even Reyes’s ostensible protagonist is just kind of there, pulled along by events more than anything else. It falls to Davis, of The F Word and Halt And Catch Fire, to give the movie all of its heart and most of its spine as Grace, a soldier from the future who’s been augmented with cybernetic parts in order to stand up to a Terminator for more than four seconds.

She’s great, carrying the emotional trauma of an apocalypse in her eyes and her jaw much like Michael Biehn did in the original film – and with the same streak of bemused hope in her quieter moments. If there’s a reason to see this movie, Davis is it. Otherwise, Dark Fate can go on the shelf with Rise Of The Machines and Genisys as kinda-decent Terminator sequels that extend the property without really improving on its conceptual brilliance and exceptional set pieces, though there’s a climactic three-stage chase sequence that comes awfully close.

And there’s one genuinely new element I found really interesting: the robot-on-robot violence is truly grotesque this time around, flesh shells shredding to reveal gleaming endoskeletons and black nanogoo contorting in disquieting ways, then reforming into stabbing weapons. There are moments that seem to reference Shinya Tsukamoto’s Tetsuo movies from the early 90s, which is not a sentence I ever thought I’d write about a Terminator movie.

But the most disturbing element of all is the creeping sense that this franchise has become its own Skynet, relentlessly trying to rewrite its own history in order to guarantee a successful future.