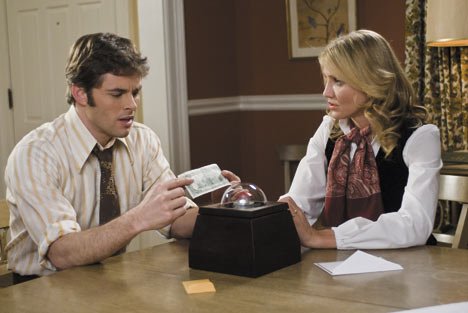 Richard Matheson’s short story Button, Button is a steel trap built on a simple, elegant premise: a couple is presented with a mysterious button. If they press it, they will be given a large sum of money, and someone they don’t know will die.

The story is a sharp examination of greed and morality, and it’s over in a few pages – well before we have time to think about the larger implications of the existence of the button, and the man who spends his time delivering it to people.

In his new thriller, The Box, writer-director Richard Kelly tells Matheson’s story in half an hour or so, and then spends the rest of the movie’s running time filling in blanks that don’t need to be filled in. The result is an occasionally intriguing failure – but a failure nonetheless.

It starts off well enough, with a digitally mutilated Frank Langella delivering the “button unit” to struggling couple Cameron Diaz and James Marsden one December morning in Richmond, Virginia, in the final weeks of 1976. (Marsden works for NASA as an engineer Diaz teaches at a local prep school.) He lays out the rules and gives them 24 hours to decide what to do.

This first movement of The Box – which hints at some otherworldly activity behind the button but spends most of its time on Diaz and Marsden’s debate over whether to press it – is easily the most satisfying. Kelly bores in on his actors with a powerful focus, revealing how rationalizations and hypotheticals can lead to cold-blooded murder. And when Langella returns to pick up the box the next day, Kelly plunges into his own tangent universe, telling the story that follows the twist ending of Matheson’s tale, explaining the mystery of the button and the world that surrounds it.

This is where The Box sows the seeds of its own doom. As anyone who’s seen both the theatrical version and the director’s of Donnie Darko can tell you Kelly’s a much better storyteller when he’s dealing in ambiguities rather than absolutes, and he can mine supernatural, unsettling dread from ordinary middle-American settings like no one since David Lynch. But if you let him, he’ll talk you to death.

Kelly does an awful lot of talking in The Box, and as he does, the movie slides from cryptic thriller to full-on science-fiction epic. That’s not necessarily a bad thing. God knows, in the same week that brings us the inanities of The Fourth Kind, we could use a proper SF movie, particularly one that uses Steven Spielberg’s Close Encounters as a reference point the same way Donnie Darko drew on Robert Zemeckis’s Back To The Future.

But Kelly doesn’t know when to stop, and as he pushes the story further and further, his film sags with the weight of all the mysterious allusions to the Viking probe, the bizarre nose-bleeding zombies that turn up to escort our heroes through the rat’s maze of the master plot, and appearances of Kelly’s beloved CG water formations.

By the time The Box plays out its final movement, with Diaz and Marsden frantically puzzling out another life-altering challenge, it’s awfully difficult to connect with the characters on an emotional level. Kelly’s reduced them to pawns in a much larger game – one they can’t possibly win.

You can sympathize with their frustration.