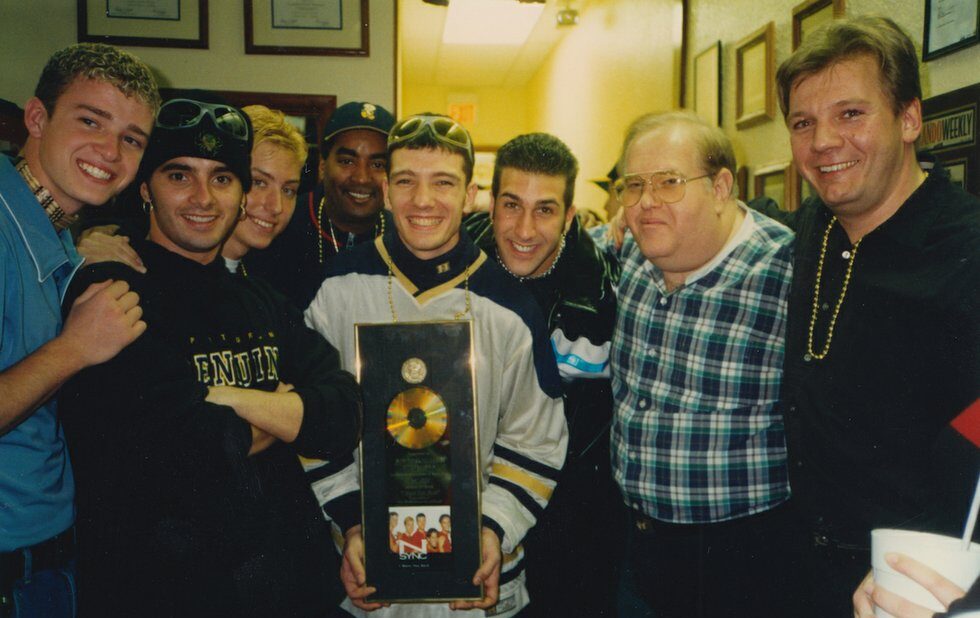 Former teeny boppers of a certain age will remember the rivalry well. You had to choose a side and crossing it was akin to committing treason.

Were you a fan of the Backstreet Boys, the OG mid-90s boy band who harmonized like angels? Or did you stan *NSYNC, the knockoff of BSB, albeit with wackier costumes and better synchronized choreography?

Whatever side you picked as an impressionable tween, you probably didn’t know that both groups were the creations of bespectacled conman, Lou Pearlman.

After forming BSB in the early 90s and seeing how lucrative the formula could be, he then formed *NSYNC and pitted the two bands – and their fans – against each other. Neither group found out they shared a manager nor that he manufactured the feud until years later.

This revelation is just one of many in Aaron Kunkel’s documentary, The Boy Band Con: The Lou Pearlman Story.

The doc begins with Pearlman’s grand plan to create a boy band, an idea he came up with after finding out how much money New Kids on the Block were raking in. He placed an ad for a vocal group in the local Orlando newspaper and after auditioning hundreds of young men, picked the five who would make up BSB. While BSB’s profile was rising, he formed *NSYNC, figuring that another music exec would create a rival band so he might as well do it first.

This was a bad business practice, but the real fallout came when both bands realized they had signed terrible contracts with Pearlman. For some unknown reason, no lawyers looked at either group’s paperwork before they signed.

After three years of working non-stop, selling out concerts and selling thousands of CDs, the members of *NSYNC received cheques for only $10,000 each. As Bass says, he could have made more money waiting tables.

Both BSB and *NSYNC filed lawsuits against Pearlman and eventually were able to get out of their contracts. (The name of *NSYNC’s 2000 album No Strings Attached is a reference to the group cutting ties with Pearlman).

Yet during these publicized legal battles, Pearlman kept signing new pop groups. Nikki DeLoach, of the girl group Innosense, says her lawyer advised that signing the contract would be like “committing career suicide,” and yet she still did. These moments from the doc speak to how the ways stardom completely deludes judgement and put music industry corruption into perspective

Kunkel also tracks down an impressive range of people from Pearlman’s life, from his childhood friends in Queens, New York and BSB’s former tour manager to several people he swindled in a Ponzi scheme and a former lawyer he also attempted to bamboozle.

The doc loses its momentum when it gets into the nitty-gritty of that Ponzi scheme in which Pearlman manipulated mostly seniors into investing in a fictitious airline. In total, he defrauded investors out of more than $300 million. This scam is what eventually landed him in prison, where he died of a stroke two years into a 25-year sentence. He was 62.

Although you feel sympathy for the musicians, the retirees were the real victims of his deceit. BSB and *NSYNC got out of their crappy record deals and went on to have incredibly successful careers. Almost none of the people who invested with Pearlman ever got their money back.

With only interviews, some archival footage, and stock videos of anonymous dancers doing classic boy band choreography, the documentary lacks the dynamism to warrant feature length. And for anyone who has been following the Pearlman story, the doc presents very little new information.

One area that’s barely discussed is the sexual misconduct accusations against Pearlman. A 2007 Vanity Fair article portrayed Pearlman as as sexual predator who allegedly wrestled with the teenage boys in his band Take 5 wearing only a towel, and showed them a pornographic movie. The doc does mention how Pearlman allegedly had multiple secret cameras set up in his home where many of his pop stars hung out, and taped the women of Innosense tanning topless. But these allegations are treated as a side note to his financial crimes.

At worst, The Boy Band Con suggests Pearlman may have made inappropriate sexual advances but it’s also forgiving, painting him as lonesome, fame-obsessed con artist who wanted to be the sixth member of BSB or *NSYNC. The doc cements Pearlman’s legacy as equal parts the creator of two of the most famous boy bands of all time, as it is a greedy, corrupt businessman. More analysis on Pearlman’s impact on pop music and digging deeper into the veracity of the sexual allegations would have strengthened the doc. Instead, it’s more like a primer on Pearlman for those who haven’t thought about boy bands since the 90s than a provocative true crime investigation.