Film about horrific dolphin slaughter feels like a heist pic 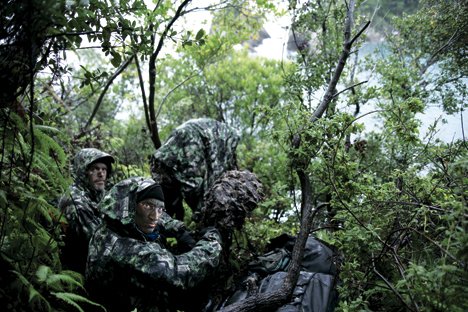 Shuffling glassy-eyed out of a screening of The Cove, I realized how infrequently documentaries present us with genuine horror.[rssbreak]

We can be shocked, surprised or even revolted by what we see, but more often than not, the filmmakers are coming late to the party they’ve missed whatever atrocity they’re telling us about, and they’re doing their best to reconstruct it.

The Cove is different. It documents the extreme lengths to which director Louie Psihoyos and his subject, animal rights activist Ric O’Barry, who used to be a dolphin trainer, had to go in order to capture, on camera, the slaughter of dolphins in an isolated cove in the Japanese fishing town of Taiji. And then the film shows you that footage, and dares you to look away.

It’s not a stunt. The movie spends almost an hour and a half explaining what we’re going to see in that footage, with testimony from activists and witnesses telling us what happens in that cove, and why Japan’s government and fishing industry collude to keep people from finding out about it.

But in letting us into the planning and execution of his operation – which plays out as a very polite commando raid on a secure location, shot with a thermal camera and night-vision rigs – Psihoyos also gives his movie the structure of a heist thriller. (He even sardonically compares a hotel-room prep meeting to a scene in Ocean’s Eleven.)

That gives The Cove the momentum to grab you and keep you rigid in your seat even as you understand the movie is taking you somewhere you don’t necessarily want to go.

Let them talk. It’s just noise. The Cove is a devastating, horrific indictment of cultural corruption, political cynicism and inhuman cruelty – and if it’s agit-prop, well, it’s an outstanding example of the form.