THE CRAZIES directed by Breck ­Eisner, written by. 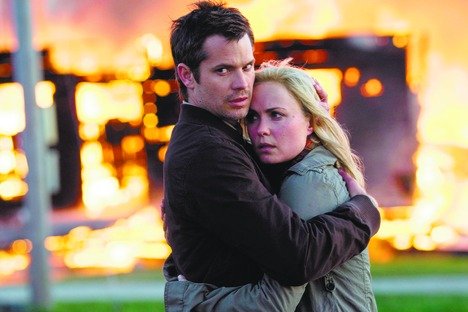 THE CRAZIES directed by Breck ­Eisner, written by Scott Kosar and Ray Wright based on the screenplay by George A. Romero and Paul A. McCullough, with Timothy Olyphant, Radha Mitchell, Danielle Panabaker and Joe ­Anderson. An Alliance release. 100 minutes. Opens Friday (February 26). For venues, trailers and times, see Movies. Rating: NNNN

The Crazies gives George A. Romero’s ragged 1973 thriller about a small town contaminated by a biological weapon the same high-octane makeover Zack Snyder applied to Dawn Of The Dead – right down to the use of Johnny Cash over the opening credits.[rssbreak]

Stripping out Romero’s Vietnam-era satire of incompetent military bureaucracy, the new version narrows its focus to the panicked, quarantined townspeople. Timothy Olyphant gives another sure-to-be-underrated lead performance as a sheriff trying to protect his pregnant wife (Radha Mitchell), and Eisner orchestrates several effective set pieces as the mayhem builds. And he doesn’t punk out on the ending either.