NOW MagazineMovies & TVReviewsThe Fate Of The Furious goes to some weird places, but it never stalls

The Fate Of The Furious goes to some weird places, but it never stalls

Charlize Theron is glorious but underused, while Jason Statham and Dwayne Johnson ride away with this sequel 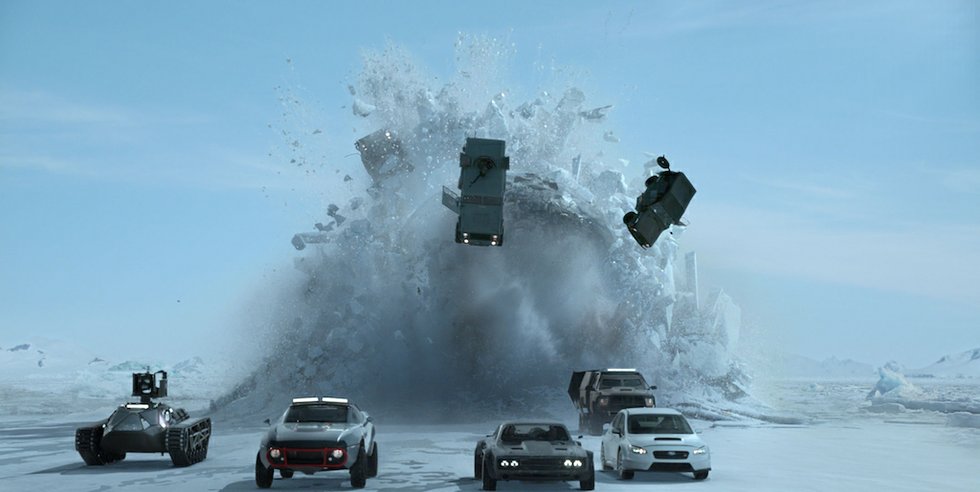 Charlize Theron is an inspired choice as the dreadlocked baddie in The Fate Of The Furious, having showed off ample, testosterone-fuelled skillz behind the wheel in The Italian Job and Mad Max: Fury Road. But here she’s less down-and-dirty Furiosa and more like her ice-cold Queen Ravenna from Snow White And The Huntsman, stalking in the shadows and over-emoting her villainy in a role that just doesn’t give her enough to do.

Theron’s Cipher is a hacker who’s got a very comical beef with Vin Diesel’s Dominic Toretto. Perhaps channelling the thoughts of purist Fast And The Furious fans, she can’t understand why a bunch of roguish outlaw street racers have been meddling in international espionage over the last couple of years, thwarting masterminded affairs that she’s been secretly hovering over like Spectre’s Blofeld.

She’s actually a bit of a film critic, too. While the furious crew have been globe-trotting and taking part in airborne theatrics and boom-bap pyrotechnics, she’s noticed how the gears have started to grind in this franchise. She latches onto inconsistencies in Dom’s character as well as a major blind spot in the past couple of movies, using that as leverage to turn Diesel’s character into the tool that he actually is.

He works for her now in a scheme to pickpocket super-weapons from around the globe, leaving the remaining crew scrambling together in Bentleys, Lambos and a sleek tank to stop them. The new set-up piles the emotional stakes on Diesel’s shoulders, which he, as I mentioned in a previous story, is not equipped to handle.

What this franchise also can’t handle is all this hacking, which veers the action away from the twisted metal its meant to be about. A midsection sequence where Cipher taps into computers in vehicles and creates an army of CGI zombie cars might be the death of the franchise. When the cars are zombies, what part of The Fate Of The Furious truly feels alive?

The answer lies with Ludacris’s Tej, Tyrese Gibson’s Roman and Dwayne Johnson’s Luke Hobbs, once again serving up the comic relief that has buoyed the franchise and keeps this adventure ticking along. They’re joined by Jason Statham, whose Deckard has been drastically re-branded from homicidal maniac to a perfect buddy-cop counterpart to Johnson. When it comes to adding characters to their “family,” the Furious crew are like Sesame Street. Everyone is welcome, even the folks that were hell bent on killing them.

I wouldn’t complain about such absurd revisionism in a franchise that brought Michelle Rodriguez’s Letty back from the dead and turned Vin Diesel’s Dom from dull outlaw to dull Bond.

Pairing Johnson and Statham, actors who can throw bows and punchlines with vigour, is ingenious. A glorious prison riot where the two ricochet through the chaos, swatting inmates and security guards along the way, is a high watermark for the series and a sure sign that these two could star in their own franchise.