NOW MagazineMovies & TVReviewsReview: The First Purge could almost be a doc about life in the U.S.

Review: The First Purge could almost be a doc about life in the U.S.

America has finally caught up the B-movie franchise, as this satiric and unintentionally funny origin story proves 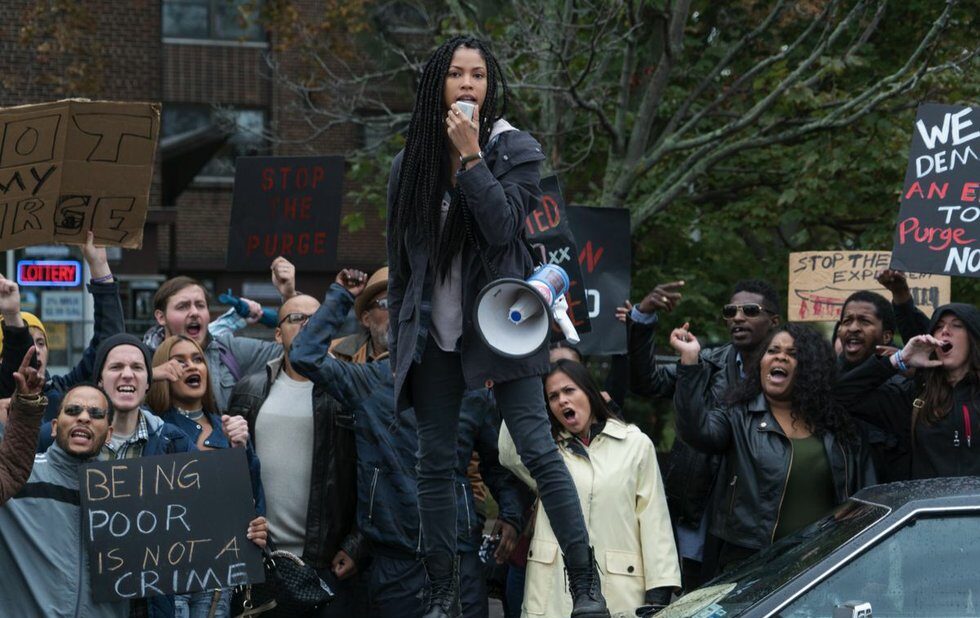 LEX SCOTT DAVIS as Nya in "The First Purge." Behind every tradition lies a revolution. This Independence Day

Somebody mentions “pussy grabbing.” Men march through the streets in KKK sheets. People in a church are massacred. These things happen in The First Purge. They also happened in America within the two years since the last Purge movie.

The franchise about the annual 12-hour slaughter marathon began as B-movie slasher fodder with a side of strained social commentary about the rich preying on the poor. As the movies progressed, the violence started taking a backseat to the side-eye view of contemporary America. Between Trump and the NRA, the U.S. has been racing along to be just as fucked as these movies.

The First Purge is an origin story with the unenviable task of explaining how the country decided to temporarily legalize murder (and all other crimes – but really, let’s just focus on murder).

Marisa Tomei, looking a tad embarrassed to be here, phones in her performance as Dr. Updale, the psychologist arguing that a limited-time offer on unchecked violence (like a flash sale for sociopaths) would ultimately be good for society. So caught up in her hackneyed theory, Updale doesn’t even catch on that the government is only adopting it for some Thanos-like population control.

“What did I do?” her character asks as she gets wise. Tomei’s bloodless delivery elicited howls of laughter at the screening I attended.

That unintended humour is matched by on point critical gags from a largely African-American cast. They make up the Staten Island residents used as guinea pigs in the Purge’s beta-phase. The movie’s winning touch is that it leaves its schtick aside long enough to develop a neighbourhood dynamic.

The authorities are counting on Staten Island’s low-income population to cleave at each other, to show the world why the Purge should go national. The community, led by Lex Scott Davis and Y’lan Noel as (respectively) an activist and her drug kingpin ex-boyfriend, band together in resistance.

As a criminal with Robin Hood charm, Noel elevates his clichéd role, his sombre performance reaching a level of seriousness the movie doesn’t always match. As the one guy who should be giddy about an evening where the law won’t get in his way, Noel’s Dmitri looks on like “nah, man” at a white capitalist structure dangling the wrong kind of freedoms.

This cast gives The Purge’s blunt satire a more humane and comic touch.

The best and most uplifting laugh sneaks up on us when government surveillance is looking for a violent rampage and are disappointed to find residents hosting a neighbourhood block party instead. When all activity is legal, these folks jump at the opportunity to enjoy noise violations.

Eventually violence does take over. Mercenaries are secretly dispatched to kick-start the slaughter and Dmitri goes John McClane to save the hood. Noel’s got moves, but the ludicrous action-packed climax also earned those unintended howls.