Director’s war pic is her best in years 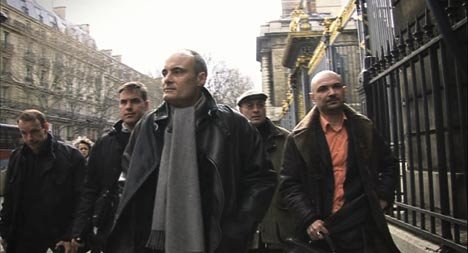 Its life-and-death for Anthony Mackie (left) and Jeremy Renner in The Hurt Locker.

War, the combat veteran and film director Samuel Fuller once said, is not about friendlies and enemies, or nations or ideology or any of that stuff. It’s about you and the guy next to you and the bullets flying in your direction.

Kathryn Bigelow strips down that idea even further in her bristling, taut thriller The Hurt Locker: it’s about you and the bomb you’re trying to defuse. Your death isn’t coming from some unseen muzzle beyond your field of vision it’s right there in front of you, it’s got a timer, and that timer is counting down.

The Hurt Locker is set in present-day Baghdad, but it could be taking place anywhere in the world, at virtually any time in the last century. Cellphone detonators aside, the technology of the improvised electronic device hasn’t really evolved much since the land mine of the First World War.

Our guide to this sandblasted landscape of sudden, pulverizing death is a specialist named William James, and your mental image of the kind of man who can do this job is pretty much what you get – he’s a bit of a cowboy, not much for procedure, follows his own rules. And he’s the best there is, which means he walks into the middle of the kill zone and walks back out with a defused weapon and another notch on his belt, over and over again.

James would be the hero if this were a conventional war film, but neither Bigelow nor the actor Jeremy Renner seems interested in being conventional. James’s arrogance and cocksure manner aren’t charming or reassuringly anti-heroic. His style frankly terrifies his new squadmates (an excellent Anthony Mackie and Brian Geraghty), who have just 38 days left in their rotation and are already frazzled enough.

Working from a spare script by journalist Mark Boal, Bigelow follows these characters through one life-or-death situation after another, ratcheting up the tension over and over again, letting it subside only when absolutely necessary. She orchestrates terrific action sequences with minimal action. The Hurt Locker is closest to her 1987 vampire classic, Near Dark, in its focus on people coping with unimaginable situations moment by moment.

It’s not quite a masterpiece. There may be one mission too many, and Bigelow misses an opportunity for a perfect blackout in favour of a less ambiguous ending. But this is still the best movie she’s made in two decades, gripping, unrelenting and merciless.

At a preview screening last month, the audience was evenly split between people perched on the edge of their seats and people pissed off that the movie refused to turn into an us-versus-them splatterfest like Peter Berg’s crowd-pleasing The Kingdom. Put me firmly in the first camp, and let the others have the Transformers sequel. We don’t need ’em.