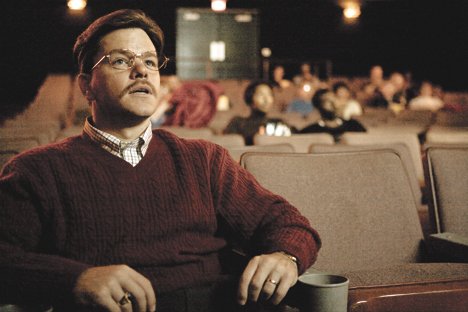 Matt Damon blows the whistle on bad outfits in The Informant!

After the meditative double bill of Che and The Girlfriend Experience, The Informant! finds Steven Soderbergh back in a playful mood, spinning the true story of an agri-business whistle-blower who exposed a massive price-fixing conspiracy into a giddy comedy about a self-important dolt who fancies himself a Master of the Universe.[rssbreak]

It’s clear as soon as the movie starts up, with its 70s-influenced title sequence set to a burbling Marvin Hamlisch score, that it’s not going to be a serious study of corporate malfeasance in the mode of Michael Mann’s The Insider, or even Soderbergh’s own Erin Brockovich. Instead, it’s a three-ring circus of misconduct and deception, and Matt Damon’s Mark Whitacre is either the ringmaster or the biggest clown in the room. Or possibly both.

It’s 1992, and Whitacre is a paunchy Midwesterner dedicated to perfecting a process that will add the enzyme lysine to corn, the better to boost the profits of agribusiness giant ADM. But something’s wrong a mysterious virus is destroying the lysine. When Whitacre tells his bosses the virus was planted by a Japanese competitor, they call the FBI. When the FBI taps his phone, Whitacre panics and tells the agency all about the way his company conspires with international competitors to fix the prices of products all over the world. Things kind of snowball from there, with Whitacre playing mole for the feds and proving to be the least effective operative in the history of infiltration.

Damon is in top comic form as the enthusiastic, oblivious Whitacre, marching through hallways and hotel lobbies with purpose even if he never seems to know what he’s doing. His banal inner voice is a constant source of delight. Once you realize that cheesy Hamlisch score is also coming from inside his head, the movie snaps together brilliantly.

Everybody’s having a great time, and so will you.