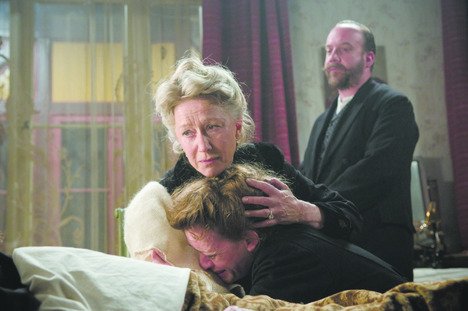 Based on the speculative novel by Jay Parini, The Last Station reimagines the last year or so in the life of Leo Tolstoy as a series of battles fought between his publisher and his wife over the author’s legacy – and, not incidentally, his estate.[rssbreak]

Interesting stuff, certainly, but not exactly cinematic, and the bulk of the film feels like a stage play that somehow crept onto the screen while its author was distracted.

Writer/director Michael Hoffman, whose credits include the similarly overstuffed and undercooked period piece Restoration, has assembled an impressive cast, with Christopher Plummer as Tolstoy, Helen Mirren as his imperious missus, a moustache-fondling Paul Giamatti as the publisher and James McAvoy as a wide-eyed Tolstoy acolyte conscripted into the scheming when he’s hired as the old man’s secretary.

But with the exception of McAvoy’s ingenue, who gets to move between the various factions (and fall into bed with fetching socialist Kerry Condon for his troubles), the actors are given nothing to do beyond variations of the same argument.